30 Aug 2019 00:44 #96642 by blackkn8
Replied by blackkn8 on topic Bye Bye Una League - reports
Hi together...
short information.
We update our page and so some links will not work anymore. So please use this links to get more informations... 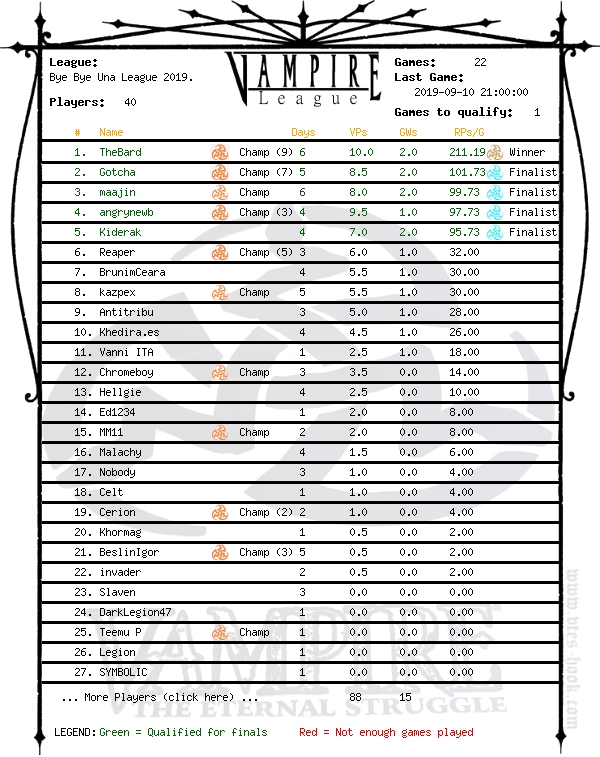 Or the direct link: www.vtes-hook.com/vtes/event-summary/show-events/107-bye-bye-una-2019-event
Prince of Wiesbaden, Germany

Yesterday is played 5th(last) round league.

We get 4 new players in league and hit 40 players total for now.

5th round still not ended,we allow self organize games until wendesday,
so who dint play round 5th get you game today or tomorow,
in thursday I will contact finalist about date and hours when finals start.

Marcin gets to be top seed after roll dice for tie.

Until now Marcin play 2 finals leagues without won,now as top seed have good chance to win.
Him took 2GW both time played celerity gun combat with 3VP in 4 player table

Until now Rudolf play 1 league finals and won-that happen in league before.
Him took GW in last round with 5VP playing EL toolbox.

Until now Marius play 8(recorder) finals in online competions,him won 1 league
and 1 tournament.
If we count online word ranking couting only 2019. Marius is N1.
Him took GW in last round with 2VP in 4 player table with Anson gun combat.

Until now Bruno dont have finals in online competion.
Him took GW with Gargolye block with 3VP in 5 players table

So we can see each of 5 finalist play finals in online competions before.
3 players won,2 players wait for first online trophy.
I beleive finals be played in monday,but still wait to all players confirm.

I was asked to write a report on the finals of the latest Lackey league and gladly accepted the challenge.
Let's start with pre-final's setting:

Which decks did I expect?
Sadly, the top-seated player's deck was a kind of blind spot. He won two times with a CEL Gun deck, but that by name could be anything between weenie and big caps. At least I expectet Marcin to play it again.
Bram is famous for building straight weenie to midcap decks, so chances were high to see one of these (but I did not expect the archetype he played).
Twice Arnau played weenie Computer Hacking bleed, once he got a game-win with it. My guess.
Martin? Too many options, I decided not to worry about his deck.
In this metagame I preferred to play small vampires. Weenie ANI Anarchs would have been my choice with a higher ranking, but I knew I had to make more VP than anybody else at that table. That's why I chose Ravnos Clown Car.

After SEVERAL die rolls, the seating was the following:
Bram > me > Marcin > Martin > Arnau

Bram started with Jake Washington. Could be everything. One transfer on one card.
I got a 2-, a 3- and maybe two 5-caps in my crypt, nice. Starting hand was two Ravnos Carnival, a Mozambique Allure, one or two Embraces, and two or three "too early" cards like Uncoiling or Gramle.
Marcin played an Ashur Tablet. 3 transfers on one card. Discarded a combat card.
Martin played Anarch Troublemaker, and transferred out Gideon Fontaine, plus 1 transfer on another card.
Impressive setup by Arnau: Four 1-caps.
After Bram introduced Horatio and Wendy Wade into the game, I knew my predator: Weenie Tzimisce War Ghoul. No hooray.

I started breeding. Carnival, Zip went to Africa, embraces. Transfers, Tsigane enters game.
2nd Ashur. Now 7 blood on one of Marcin's vampires.
Martin's Gideon equipped with the Heart of Nizchetus. No hooray either. Angela Preston enters the game. It is the deck he made the sweep with in the preliminary rounds.
Arnau announces Computer Hacking bleed four times, Bram chooses not to block any of those actions. Total pool loss of 9 for him (because of one Leverage). One new crypt card.
Time for Bram's showdown: Obtenebration skill card for Horatio, Nocturn, War Ghoul #1 burning Nocturn, War Ghoul #2 burning Jake. Mitchell, the Headhunter joins the ranks.

I continue breeding. Carnival, Zip and Embrace both embrace. First Con Boon by Tsigane, Eldest are Kholo. +5. Andrej Puxon appears.
Marcin finally shows his star vampire: Massassi. Where is a Pentex with old rulings when you need one?

Now the road of the game is more or less clear.
My next three turns: Carnivals. Breed and Con Boon. A Coven. Breed and Con Boon, even one for Bram. (A try for Heart of Nizchetus, DI by Martin. Later successful, but in vain. ^^)
Get rushed one vampire to torpor each round by Massassi. Bakr appears at the end of turn 7.
Martin steals the second War Ghoul. Discussions about rushing the Ravnos or not. Jost Werner, and later Mariana join the ranks. Arnau says "Not to be" to Scourge of Enochians.
Arnau stays alive, finally another swarm of four 1-caps.
Bram manages to get enough pool for a third War Ghoul (Charisma helps).

My 8th turn. 1 h 45min played. I have twelve ready Ravnos, and some in torpor. Marcin is on 19 pool, has two unlocked vampires. I drop Week of Nightmares, and have after twelve bleeds my first VP.
Martin ousts Arnau, and afterwards Bram (even though a Daring the Dawn on Angela's bleed gets DIed by Bram). Two War Ghoul rushes torporising a Ravnos each. Martin ends his turn with 21 pool, 4 locked vempires with PRE, 2 locked War Ghouls, and Jake unlocked. He passes the turn ... and the Coven to me. 30 minutes to go.

The Coven makes the huge difference, decides which sides wins this battle.
Two turns later, after endless successful blocks (with or without Majesty) it is decided: Ravnos.