Minutes for the V:EKN National Coordinator meeting held at the EC in Genova, Italy 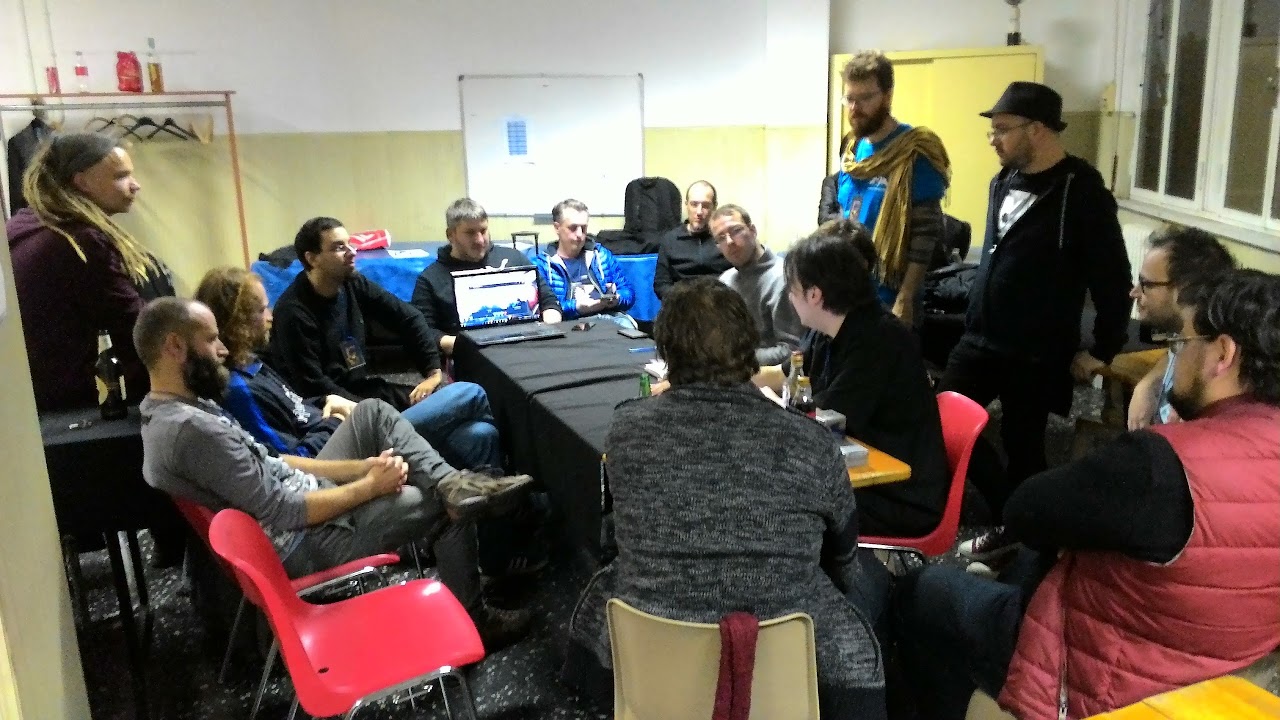 • GQ to announce candidates who won on www.vekn.net
o HA has done this on the forum thread [DONE]
• PB to circulate ideas and create poll on European Championship Qualifier requirements/needs [DONE]
• GQ/HA to circulate and create a poll for EC hosting 2017
• GQ to investigate wider IC structure and how the VEKN can work for a wider group or participants e.g. getting Brazilian players more engaged with the wider community/organisation
• SA to provide a copy of Selen and his research [DONE]

Candidates previously announced on www.vekn.net and via e-mail to NCs

All candidates produced mini manifestos which were distributed to NCs and placed on the NC section of www.vekn.net, national co-coordinators were also encouraged to query the candidates via facebook/e-mail as they saw fit.

Votes in red were received via e-mail/facebook messenger and 27/33 NCs voted or actively abstained.

Abstain/None of the above: 3
Jeroen - Netherlands
Tito - Portugal
Djordje - Serbia


2. RR and others noted that the Brazilian playgroup was large and active but not that associated with the wider playgroup.
HA noted that Gines and Orian had discussed this prior to the vote and agreed that more communication and dialogue to get active and enthusiastic members of the VTES community involved in wider activities was required.

White-Wolf/Paradox are hosting a large cross world event in May 2017 in Berlin.
Cost of this event is believed to be €150 per attendee.
BP indicated it would be good to get VTES in front of VTM [etc] players but that the price was too expensive

RR noted that Swedish players hat met and played VTES with the new team at White-Wolf and that the impact was positive.

GQ – has indicated option to host again in Palma de Mallorca at the same/similar venue and similar [early November] time of year.

PD, JL expressed that Prague/Helsinki could host and Poland/Hungary were also directly asked if they would be interested in hosting again following roundtable discussion by the NCs present.

It was noted by PD and others that price and distance were limiting factors to a large number of players e.g. n Genova there were:
1 Russian
1 Belarussian
1 Cz/Slovakian
1 Hungarian

Amongst an attendance of ~100 players

HA stated with agreement from PB that there would be a three week window for teams to submit their bids and then these bids would be sent to the NCs.

The European NCs would then get an opportunity to vote on these bids one week later via a doodle/surveymonkey poll.

The intent being to discuss the bids with your players.

The InnerCircle will then take the results of the vote and discuss with the nominated team and confirm a location once agreed and assistance required determined.

4. BP gave a comprehensive output of where things are with Paradox/White-wolf
I have been provided with notes from Ben and Mike and have included these below

- White Wolf is now requiring the Design Team to submit its expansions to them for review and editing before being allowed to release them. This will cause a delay in the release of the upcoming Bloodlines set. Artwork will likely be the source of the most lengthy delays due to the physical work required.

- White Wolf would be interested in publishing V:TES in some form, if publishing proves to be viable.

Dhaunae very much wants to be able to publish both the rules and the cards. White Wolf are keen for a rulebook to be published/available for new players who could then buy cards if and when cards were published again.
White Wolf are aware that the VEKN consider reprinting cards as a more critical priority than a publishing rulebook, but also are keen to point out that the work to produce this is straight forward and not incompatible with resources required for other projects.

- Questions regarding who owns what.

White Wolf is trying to track down the hard drive that contains all of the White Wolf produced artwork.

The owner of Vampire: The Eternal Struggle is White Wolf. White Wolf don't own things such as the Deckmaster logo, but all the key elements needed to play the game are White Wolf's.

To summarize, my additional comments from the meeting:

- The new White Wolf (Paradox) guys are positioning themselves as licensors and caretakers of the IP, they have no plans to publish anything themselves, they will simply find suitable licensee partners to work with.
- They have talked about non-exclusivity in regards to future projects, and from this I think we should infer that other World of Darkness games will eventually get published, regardless of what happens to V:TES.
- They have also talked about trans-media experiences and ‘One World of Darkness’ – i.e. LRP will influence tabletop, which will influence computer games, which will influence TV shows, etc. Any future iteration of V:TES (or any other game) will likely need to fit in with this thinking. It follows that any V:TES presence at their Berlin event next year would best succeed if positioned with this in mind.

A few other thoughts:

- In case it’s not clear to non-role players, my understanding is that the tri-snake symbol was invented specifically for Jyhad/V:TES, and that it is not an icon relevant to the Vampire: The Masquerade role-playing game.
- Regarding the new White Wolf web site, apparently they are planning some sort of open forum for fans to self-publish their own game material to share with their peers, and Dhaunae seemed to suggest they might like to try something similar with V:TES cards (not withstanding any legal/licensing complications).
- While White Wolf are giving Onyx Path a fairly free reign to complete their slate of 20th Anniversary edition RPG products, they plan to keep much tighter control of the next ‘V5’ edition. While this will be in continuity with the meta-plot of previous editions, the clans/bloodlines/disciplines/etc. may get tweaked or spun a little differently. (I notice than Shane DeFreest, former Camarilla head and MET publisher, is now a WW employee, and the new MET books contain a lot more ongoing plot than the Onyx Path books.)
- The original Jyhad rulebook states that the Discipline symbols are Trademarks of WotC and give named artist credits for them. These references are omitted in later rulebooks. This leads me to wonder if the rights were passed in perpetuity to White Wolf when the game fully transferred over to them with Sabbat War – but given Paradox’s lack of understanding of the situation, they likely need to research this (and other ambiguities) further.
- I should see some more of my games published next year, and I am slowly building up a network of contacts in the board games industry. In the event the licensing issues with WotC can be resolved there are a few other people I might be able to approach with the publishing opportunity.

At White Wolf, we are working hard for VTES. It may or may not pan out, but we are certainly exploring all the options available. We are very thankful for the support and patience of the VTES community.

Other points made on these conversations:
SA – noted that the work Selen and he did on the VTES community implied that “Collection” was a low priority for the majority of players [so potentially a new game with the same people and community would work]
BP asked to get a copy of this work to read.

PB talked about options to change/alter/replace/maintain EC qualifier system.
NAC is likely to be open in 2017 and there may be reasons to change current ECQ system to increase attendees at the EC.

Pascal will send a short memo with the ideas and ask for votes/input on the options [including other options].

JL noted that Fantasiapelit had picked up the excess Walch and Nusser stock and had plenty of product available for new and old players.
Postage is expensive for single items but reasonable [as flat rate] for larger orders.
Some items like 3rd edition boosters are higher priced due to limited availability and extreme usefulness as drafting stock etc.

JL also discussed making token, blood, anarch etc as fun game items and promo items. Prices look like 10 tokens for ~€5, with a minimum order of around 1,000.

AK asked where we are going/what are we doing
HA replied that intention is to still produce a set from us ~once a year;
but that we’re mainly relying on White Wolf figuring out what they own and taking it from there.
The VEKN does not encourage production of high quality, double sided proxies.

RR asked when next set due
HA replied that intention is to playtest at backend of 2016 and that there have been some delays with White Wolf coming on board [new discussion for VEKN] and with Ben’s return to US.

RF asked if more Grand Prix e.g. in Italy could happen
HA replied that yes anything we can do to encourage big groups of players is good, however we probably cannot offer “face on card” etc as a prize for each event. This would need to be discussed further with GQ and BP as they commission artwork/design sets if there are appropriate rewards for larger events.