Greetings fellow Methuselahs
Winter is upon us, in all its dark glory! Celebrate the darkness, and remember that the most charitable thing you can do to a fellow Cainite is to deliver her the oust. Well, not charitable to her, but to yourself, and, after all, that is what matters, isn´t it? I am sure most of you agree, deep in your heart, that is why you have reached this esteemed age. So do not hesitate the next time you have a decent hand and your prey's pool is low enough and all her minions are locked – what could ever go wrong?

EC PARIS WILL BE PLAYED AUGUST 16-18 2019
Organizers have announced the dates for EC 2019 in Paris, of course great for everyone who wants to plan their vacation and buy travel tickets early.

Also, the V:EKN and Black Chantry Productions are proud to announce that game accessory manufacturers Ultra Pro continue to sponsor the VEG circuit. If you attend at least one of the five GP tournaments you will get one copy of V:TES playmat featuring Evil Jensen (see above).

Please visit the official VEG information page at VEKN.net for more information – details about each tournament will be added as they are set. 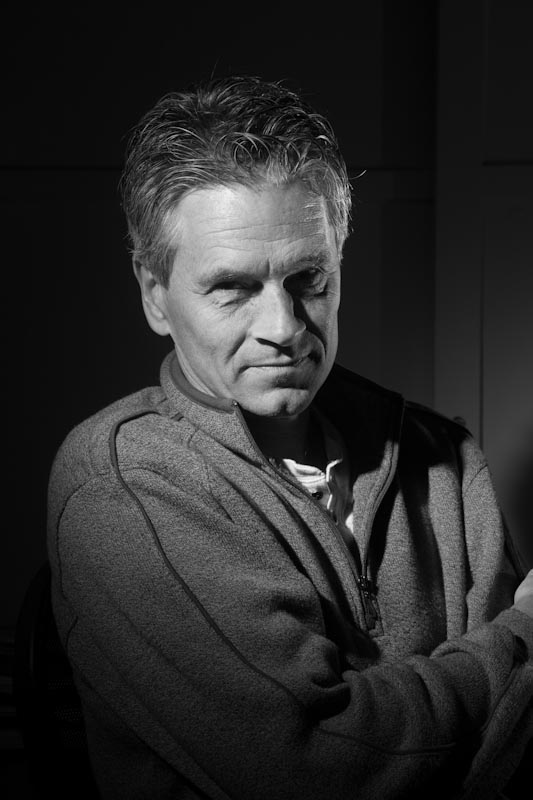 ARTIST IN FOCUS: KEN MEYER JR.
Ken Meyer Jr is one of the most iconic VTES illustrators. He has been creating flavorful and captivating artwork for almost every expansion since the original Jyhad set in 1994. Totally it has become 155 cards over the years. The VEKN and Black Chantry Productions are very happy to continue to work with mister Meyer now that the game is back in production again. You can see an example of that at the top of this newsletter – Carolina Vález from the upcoming Black Chantry product. And he also agreed to answer some questions in this interview - many thanks!

Let’s start from the beginning: What is your background as an artist?

- Well, I started drawing because of comic books. When I was very young, around 10 or less, I was tracing from the comics, using carbon paper. Later I would try to draw what I saw on the comic page beside the paper. Then, I made up some characters of my own, stories as well. I would try to get illustrations published in the fanzines of the day – this would be in the early to mid-70s. I always knew I was going to be an artist.
Though I went to college, I was a terrible student, and the college wasn't that great to begin with, so I did not learn much. Most of what I knew was self-taught. I worked in many places; ad agencies, military contracts as a civilian, software companies, etc. I did do some comic work, but mostly for small publishers such as Caliber and Eclipse, with a few smaller jobs along the way for Marvel. But, I realized I just did not have whatever it took to really make it in that industry, though I continued to dabble in it.
At some point, I did some work for a now defunct company, Mayfair Games, on a werewolf book called “Lycanthropes”. An art director there at the time, Maria Carbado, eventually went on to work for Wizards of the Coast, and because of that connection, I did some work for Magic the Gathering. But, all through that (and to this day), I did many illustrations for White Wolf games ... hundreds of paintings! I do regular work now for Onyx Path.

What artistic techniques do you prefer?

- As for media, for the longest time, I used watercolor primarily. I still use it, but use acrylic ink a lot more frequently. But I have also used other media such as acrylic, oil, mixed media, etc. I just use whatever seems to fit that particular job.

- I have to admit, I think I work better with deadlines and exact assignments. This whole “do what you want whenever” approach doesn't do me much good. I do like working with humanoid subjects when I can. I have the most fun with pictures that incorporate some sort of dramatic lighting ... which horror is tailor made for! In fact, I did not drift into the horror gaming genre because the horror aspect, but because of that dramatic lighting that so often you see in classic horror films. Most of my work early on was black and white, which fit it even more.

You have made lots of work for VTES, other games and other places – what are you most proud of?

- Well, many of the portraits I did for VTES are some of my favorite pieces, for example the whole book “Kindred Most Wanted” which was all me. I just love painting people. Along the same lines, some of my favorite pieces were done for the Clive Barker game Imagica, but the game went nowhere unfortunately. Many of the pieces in my first big assignment for White Wolf, “The Masquerade”, contains many favorite early pieces.

How do you work with models? Some of your pieces seem obvious model work, others are not so sure?

- Yes, at some point in the nineties, even in my comic work, I used more and more models and photo references, wanting to get the work as realistic as possible, and to get all those lovely shadows. It was usually a combination of shots I took myself, some friends took for me, and references I would find in books and later, the internet. You have to be able to do at least the basic work without a model when necessary, but there are so many specific, individual characteristics that are very hard to just dream up, especially when you apply out of the ordinary camera angles and all those ... shadows!

What other work do you do these days?

- I am always doing something! If it isn't a new Magic playmat to take to tournaments, it's altered Magic cards, or a commission... the variety of what I have done and do is pretty big. At the moment, I have four illustrations for Onyx Path, a portrait of a couple, some illustrations for an educational software company, a few "repaintings" of a few of my classic Magic cards, and god knows what else!
Also, I do a monthly column on the fanzines of years gone by called Ink Stains. Each month, I cover a different zine or group of zines. They were a big part of my childhood and college years, so it is really enjoyable to me, and I like sharing them with people who had no or little chance to see them for themselves.
I also teach some painting techniques at a local community college. I am also working on a cure for the common cold and a time travel machine in my spare time.

Thanks again to Ken Meyer Jr for this interview. Check out his work at www.kenmeyerjr.com, where you also can find links to his Ink Stains columns. Also visit his Storenvy-page, where you can buy art and a lot of other related things. 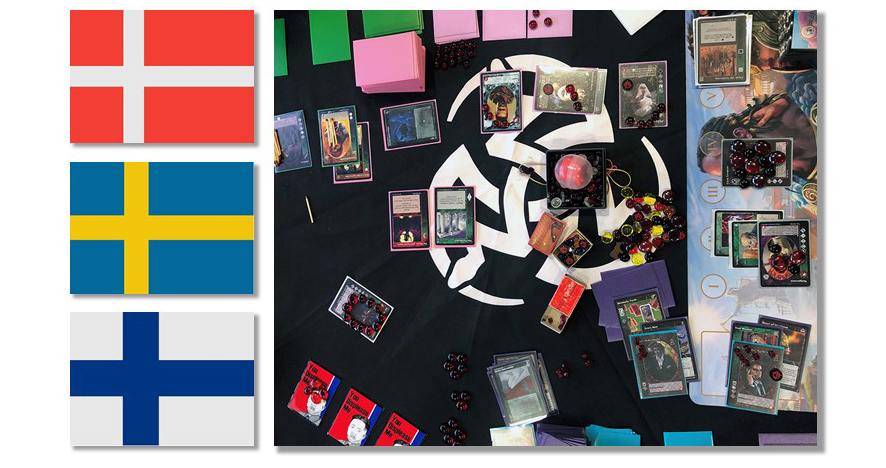 By strange coincidence, three Nordic countries held their national championships this month. Let's take a look at the results!

For this we got some words from one of the organizers, Tero Aalto:

The tournament took place in the same venue as the previous two years: the library in the Center of Espoo, i.e. in the middle of nowhere. Attendance was significantly up from the previous years, a whole 33% from 24 to 32 players. The renewed availability of cards and beginning revival of the game must have had an effect. And in fact, during fall 2018, weekly games in the capital region have also been increasingly popular. Who knows, next year we may be forced to look for a bigger space for the Nationals, but that will be a positive problem.

The tournament was a success in other respects as well. Many players described the games as interesting and even pleasant. My personal experience supports this observation: it's hard to remember another tournament where in each of the three rounds (almost) everybody had the chance to play their own game and even to win the table. The decks were very varied, and generally not very aggressive. Even the trademark Finnish combat-heavy decks were quite few.

Two game wins were required to make it to the final, and only five people did (including one with three), so the cut-off was very clear. From what I saw, the final seemed very close. 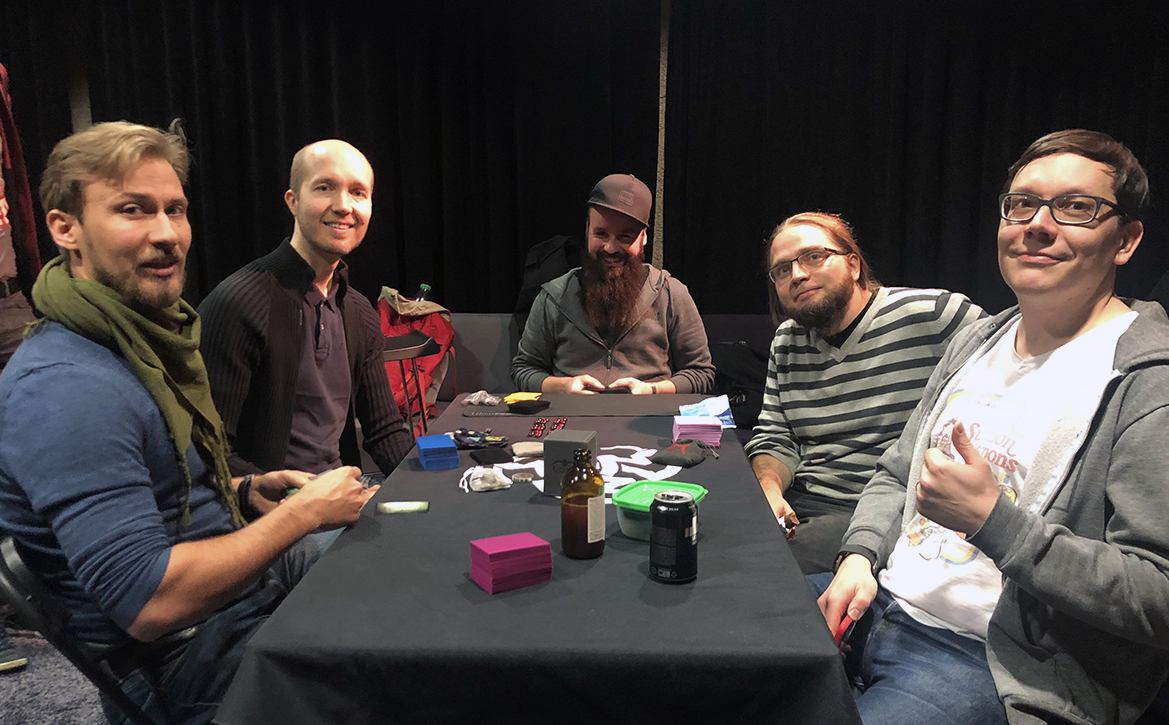 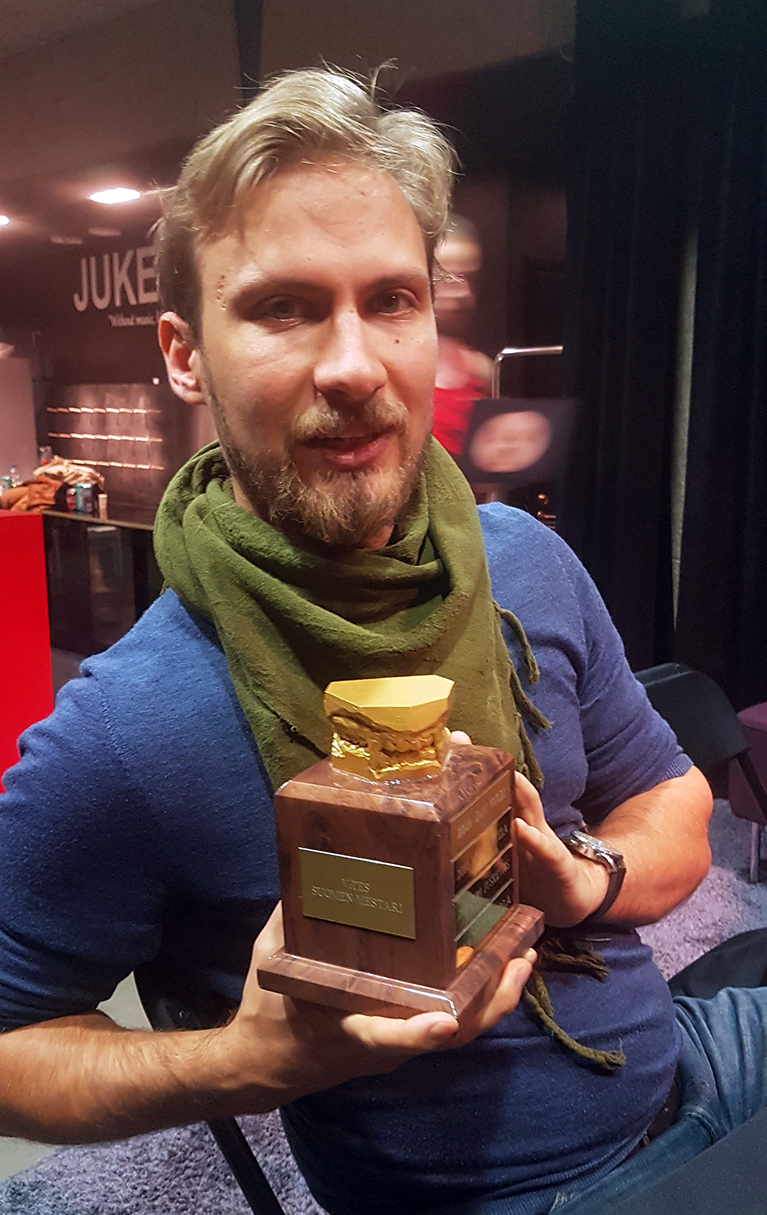 For winning deck list and more information, please also read the champion's own tournament report at the VEKN.net forum – a very good read!

• In the most recent production update, it was revealed that distributors are getting the Belgium printed Heirs to the Blood bundles and restock of Keepers of Tradition bundles by mid-December. So if you are a player that feels our products are missing from the shelves of your local game store – talk to the manager, and make that person talk to their distributors, who in turn will contact Black Chantry.

• Four preconstructed decks are almost done for printing. If everything goes well they will turn up on both Drivethrucards and in stores early in the first quarter of 2019.

• Anthology 1, which was revealed last month, is being prepared for printing. Most likely you will be able to get this too in first quarter 2019, both print on demand via Drivethrucards and normal printing in stores.

• The V5-themed boxed set is being designed. Product director Ben Peal and freelance game designer Mike Nudd are in charge, and hopefully the first round of playtesting will begin really soon. There are a number of setting-dependant issues to be cleared which are being discussed with White Wolf at the moment – Ben will talk more about that in an upcoming designers' diary-text.

• Rules director Vincent “Ankha” Ripoll is vetting wording all cards that are to be reprinted and also (in his spare time) rewriting the VTES rulebook. He is always pondering various changes for cards, rules and tournament rules – please check out his threads at the VEKN forum, for example about optimal seating and time limit variants for finals. 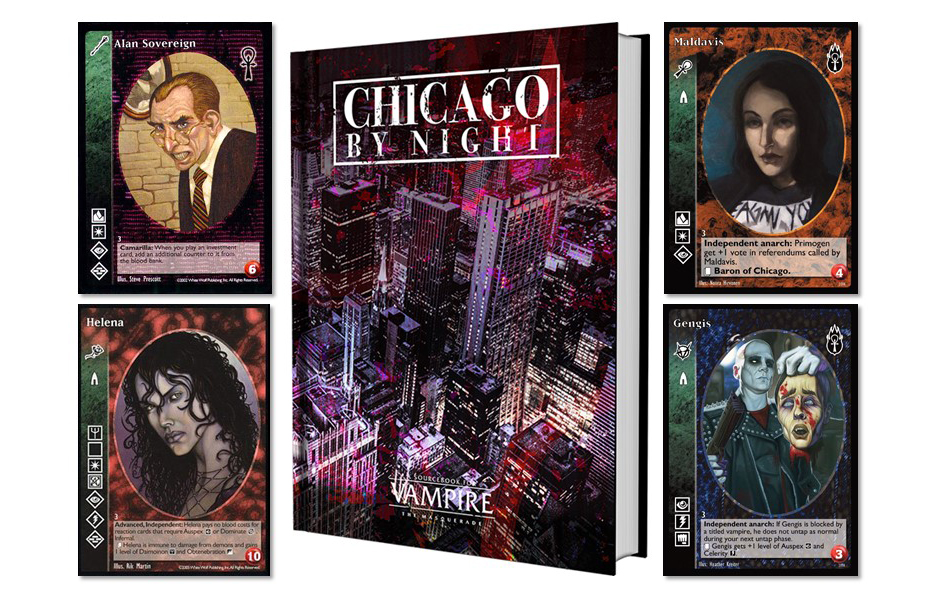 CHICAGO BY NIGHT KICKSTARTED AT 296%
1 852 backers pledged $119 039 of av $40 000 goal to help bring Chicago By Night for Vampire: The Masquerade 5th Edition to unlife. By looking at absolutelly FANTASTIC artwork spoiled at the Kickstarter page and the hundreds of pages of preview text files, this setting book is going to be a total blast. Now there will be lots and lots of waiting for the actual book, and hopefully some interesting tie-ins with future Black Chantry VTES products. According to that preview material, at least some of the lower capacity vampires already in VTES are still active in the Chicago area, and maybe also some of the really old ones …