The Vampire: Elder Kindred Network™ (V:EKN) is the Official Players' Organization for the Vampire: the Eternal Struggle (V:tES) card game.

The V:EKN is dedicated to the continued health of V:TES. It encourages the game's growth in popularity through embracing new players and supporting existing fans. The V:EKN sanctions and regulates official V:tES tournaments. It also maintains and publishes players' tournament ratings and rankings.

V:EKN Princes are volunteers who promote V:tES at the local level, coordinating tournaments and demonstrations.

V:EKN National Coordinators have similar roles to Princes, with a broader geographical boundaries and responsibility to approve tournament sanctioning in their region.

The V:EKN Inner Circle are V:EKN members who guide the organization. The Inner Circles responsibilities include:

The V:EKN Ethics Committee exists to consider allegations of unethical conduct (as defined in this code) involving members of V:EKN. The committee is comprised of the V:EKN Inner Circle members or their designees. The National Coordinator responsible for the region of a
V:EKN member alleged to violate this code shall be accorded equal participation and voting rights on the committee for the duration of an investigation relating to that incident.

Note on the use of the word "sanction." This word has two distinctly different English
definitions, both of which are used in this document:

The purpose of this code of ethics is to describe:

There is no direct relationship between this code of ethics and any criminal laws or procedures.
The standards, procedures and sanctions concern only rights and privileges of V:KEN
membership. This includes, but is not limited to:

Every aspect of this code of ethics applies to all participants in activities overseen or sponsored by V:EKN. It applies equally regardless of a person's role within an event structure, organizational position or title within V:EKN.

V:EKN is dedicated to ensuring player safety and to maintaining the upstanding reputation of sanctioned events.

Judges and the Ethics Committee should have no hesitation in addressing code of ethics violations, regardless of the effect on games in progress or the disruption to local play groups occurring after sanctions are levied.

No response from those bodies could be more damaging than failing to appropriately address incidences of intolerable behavior from V:EKN members.

The actions and behavior of all persons associated with V:EKN activities shall be:

The following is a list of examples of actions and behavior that are considered unethical. It is not intended to be exhaustive. Any action or behavior that is inconsistent with the principles of fair play, good sporting, honesty, or respect for the rights and well-of others may be considered to fall within the scope of this code of ethics.

On-site sanctions are reserved for clear, gross code of ethics violations which occur within an event and which merit penalty more severe than disqualification from that single event. Only a head judge may issue an on-site sanction. On-site sanctions must be noted in the tournament report.

The player alleged of violating the code of ethics is immediately disqualified from the current event (see Judges' Guide for disqualification processes) and is suspended from participating in further V:EKN-sanctioned events, per V:EKN Tournament Rules: Tournament Eligibility. The duration of an on-site sanction is 30 days and applies only to the nation in which it was issued.

The head judge must initiate a review of the sanction with the V:EKN Ethics Committee within 5 calendar days of the incident, or its associated suspension is lifted. The judge will detail the circumstances leading to the sanction, recommend a duration based on the infraction's severity and provide a list of witnesses to the incident.

The Ethics Committee may also independently initiate review for behavior observed either inside or outside an event environment. This process should be exceedingly rare, but may be required to address egregious ethics violations occurring outside the purview of sanctioned events.

All sanctions, regardless of origin:

Any player alleged to have committed an ethics code violation will be interviewed as part of the review process and is allowed to provide their own list of witnesses for discrete incidents.

There is no appeal process for suspension from V:EKN activities. The review and approval described above constitute the entirety of the process associated with suspensions. The determination of the Ethics Committee is final.

Sanctions fall within 3 levels of severity:

Players subject to sanction will be notified of results at the conclusion of the review process.

Suspended V:EKN members forfeit all organizational roles or offices (i.e., Prince, National Coordinator, Inner Circle, Playtest Coordinator, etc) for a period of time equal to twice the duration of the suspension, unless otherwise unanimously determined by the Ethics Committee.

There are no other V:EKN-recognized probations, suspensions or bans. Tournament organizers and judges must allow all V:EKN registered players in good standing to fairly participate in sanctioned events. Failure to conform to this requirement should be reported to V:KEN and may lead to forfeiture of V:EKN Prince status, invalidation of tournament results and sanctions as described above against the tournament organizer and/or head judge.

A list of probationary, suspended and banned players is published on the V:EKN forums at www.VEKN.net.

Heirs to the Blood Reprint Bundle 2 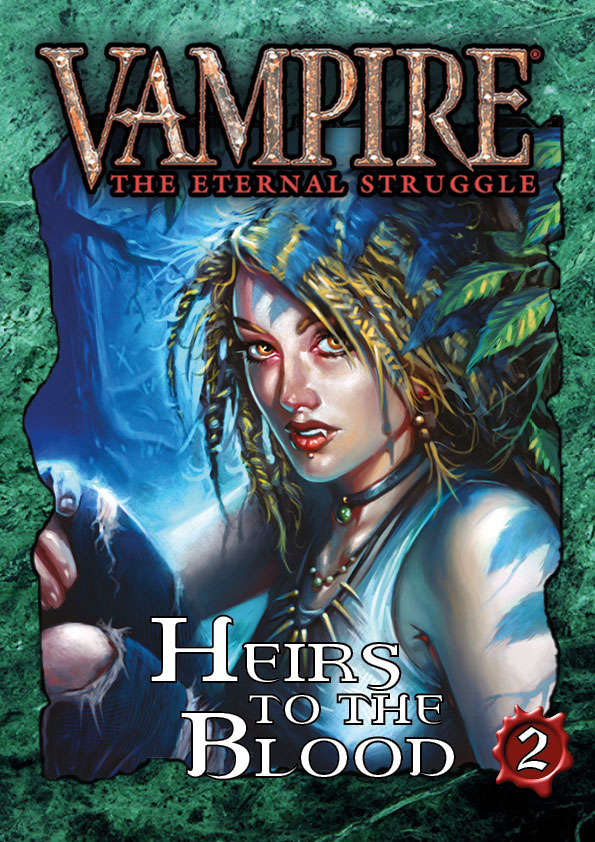 Power Pulses in the Vein

The descendants of Caine are many, and their blood is diverse. It may infuse a vampire with spiritual hunger, or stony endurance, or the maddening touch of the fae. Bloodlines arise and struggle for power against the entrenched clans. The blood will prevail.

This set is a fixed assortment of 120 cards for Vampire: The Eternal Struggle – 56 library cards and 64 crypt cards of clans Ahrimanes, Daughters of Cacophony, Kiasyd, Salubri, Salubri antitribu and True Brujah. All were first created for the original Heirs of Blood expansion 2010, since long out of print and in great demand among players.

HEIRS TO THE BLOOD REPRINT BUNDLE 2
IS AVAILABLE ON DRIVETHRUCARDS.COM: 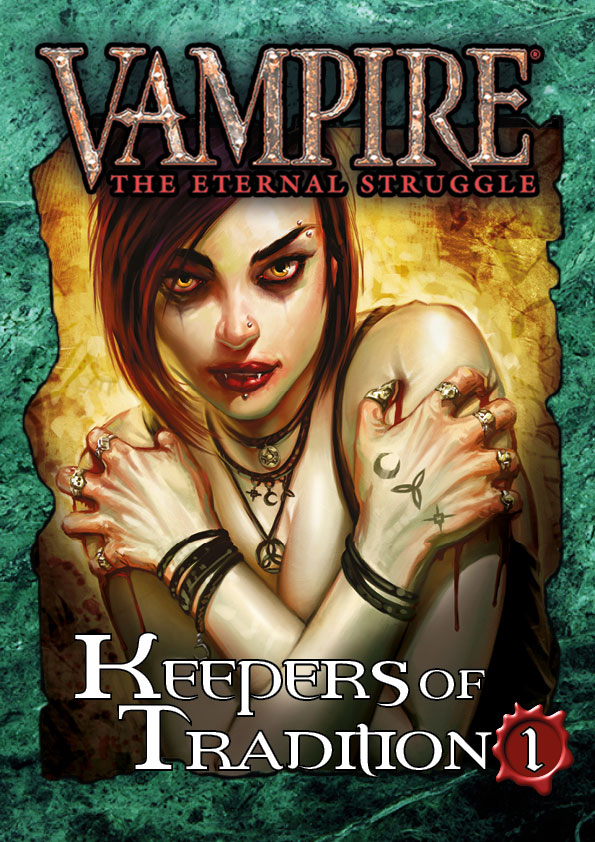 The firm hand rules all

The Camarilla is an exclusive organization of vampires that speaks for and legislates its members all over the world (at least, in theory). Bound by a number of Traditions detailing the creation, behavior and destruction of Kindred, the sect also strives to hide to existence of all vampire activity from mortal eyes. This deception, called the Masquerade, is at the core of the Camarilla's existence; the struggle to universally uphold the Masquerade is what drives much of the sect's policy and direction.

This set is a fixed assortment of 120 cards for Vampire: The Eternal Struggle – 33 library cards and 87 crypt cards of clans Brujah, Gangrel, Malkavian and Nosferatu. All were first created for the original Keepers of Tradition expansion 2008, since long out of print and in great demand among players.

Note: One of the crypt cards, Osric Vladislav, was left out of the original Keepers of Tradition print run and is here available for the first time.

KEEPERS OF TRADITION REPRINT BUNDLE 1
IS AVAILABLE ON DRIVETHRUCARDS.COM: