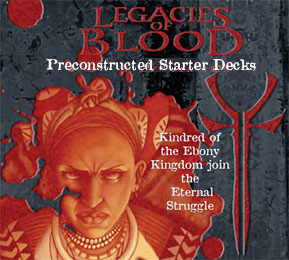 Bloodlines return as New Ones Emerge.

Distinct from the major clans, rare lineages of Kindred also play their part in the great Jyhad. The known vampiric Bloodlines return to the eternal struggle, plus all-new legacies of blood emerge from the Dark Continent of Africa! Vampire: The Eternal Struggle is again exploring the more exotic lineages of Caine's blood.

Legacies of Blood is the ninth Vampire: The Eternal Struggle set released by White Wolf, the second to focus on the Bloodlines, and the first to introduce the Laibon.

The booster packs contain 11 cards each randomly selected from a set of 201 new cards and 99 reprints (from the Bloodlines expansion). That set includes 50 new rares and 50 reprint rares, but the rares are distributed so that the new rares occur three times as often (on average, you'll get one reprint rare from every four packs you open).

In addition, the set features 4 non-random preconstructed decks, Akunanse, Guruhi, Ishtarri, and Osebo, which contain even more cards and are designed to get beginning players started right away. Each preconstructed deck contains 6 new vampires and a few new library card that aren't found in the boosters. Each new vampire is included twice in its respective starter.

Some existing cards are changed in Legacies of Blood. The changes go into effect (for all printings of the cards) when the set is legal for play.

Unless otherwise noted, vampires are Uncommon (U) rarity.

Note: Uzoma (a vampire from the Osebo starter) was accidentally inserted on the uncommon sheet as well, in place of Kisha Bhimji. Kisha Bhimji is marked with an asterisk below. She doesn't appear in the set at all. She is included in the 2006 promo set (available at conventions and tournaments while supplies last).