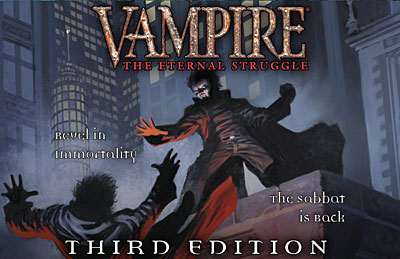 The bad boys of vampire society lead the rest in their nocturnal world, reveling in their immortality and superiority to the mortal herd. Backstabbing and treachery are expected at every turn, just to keep eternity from getting predictable. Let the games begin.

White Wolf's eleventh expansion for Vampire: The Eternal Struggle is a stand-alone base set. It is called Third Edition (after the Camarilla Edition, which is reckoned as the second edition).

The set also features 4 non-random preconstructed decks, Brujah antitribu, Malkavian antitribu, Tremere antitribu, and Tzimisce, which contain even more cards and are designed to get beginning players started right away. Each preconstructed deck contains 6 new vampires that aren't found in the boosters, many of which are included twice in their respective starters.

In addition to the regular preconstructed decks above, this expansion also features a quick-start package called The Player's Kit. The kit is designed for four players who don't know the game to jump right in a learn the game by playing. It includes everything a group of four needs to play: four 50-card decks (for the same clans as the precons, enabling the players who discover the game to quickly expand their decks), blood counters, a full rulebook, and a scripted example of play to walk the players through the mechanics of the game using the four decks.

Remember that updated rules don't go into effect until the set is legal for play.

The DRAFT effect of Claws of the Dead uses an Animalism icon when refering to the basic level effect of the card. It means the basic Protean effect, of course.

Due to an error in printing, the Third Edition cards are all printed with the card backs "upside down" from all the other V:TES expansions.

Additionally, the quick-start decks' cards appear in the reverse order from the order used in the script. So, to use the script, first invert the both the library and the crypt (deal out the deck face down one card at a time to make a new deck) of each deck. To repeat the scripted session (or simply verify the order of your decks), check the Player's Kit Deck Listing.

We apologize for not catching the errors earlier. The errors will be corrected in any subsequent print runs of the Third Edition.