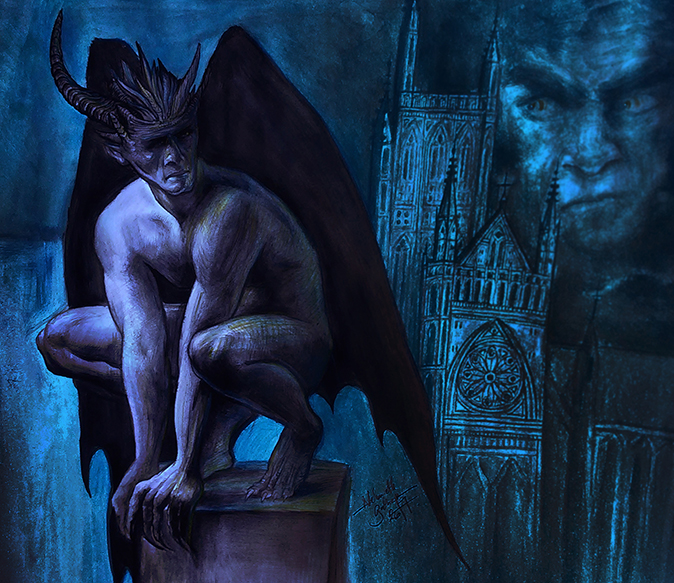 Greetings fellow Methuselah
I was about to tuck myself in for a nice, really long torpor session with a cozy stake through the old tired beatbox, when I suddenly felt a tingeling sensation in my veins. The eternal hunger quaked through my body, and I came to the conclusion: I have more fish to fry. There are still some old enemies to teach a lesson! Some ousting is left to do! Can you also hear the battle call of the Founders? Just when I thought I was out, they PULL me back in!

OUR GAME IS BACK IN PRINT
… and this time is for real. Black Chantry Productions has been alloted the license from White Wolf Entertainment to produce Vampire: The Eternal Struggle, both reprints and brand new cards. Not much has been disclosed yet, but the titles of five products were stated in the first press release. If you haven´t done so, please also visit Blackchantry.com.

Products are being revealed really soon, but while you are waiting, have good look at the Lost Kindred set symbol and the preview card above. Symbol design by Ginés Quiñonero and artwork by Gábor Németh.

EC 2018 IS BEING PREPARED
Radoslaw Szewski is the head organizer of the European Championship 2018 to be held August 24-26 in Warsaw, Poland. We asked him some questions.

How are the preparations going?
- I'm in the middle of the process right now. My goal is to be able to present everything at the end of May. Prizes, judges, sponsorships deals – everything is important and time is running out. You know, I'm quite a busy man: family, job, my band Zombie Strippers from Hell... But my friends know that, because of my ADHD, I like to do different things one at a time.

Do you have any problems? Anything attendees need to think of?
- No. From the travel/booking perspective everything is just fine. I know the hotel staff, so there will be no suprises, I hope. The hotel is big enough for everyone – I chose the date for one particular reason: the hotel is empty at the time, so we will have plenty of space for VTES. And in summer the weather should be fine. Warsaw by night is really great, but I suppose everyone will just play VTES.

You have organised the EC before – what will be new this time?
- Yes, I did it twice before. This will be my last EC as an organizer for sure, and for me it will be a very sentimental journey. I want to meet all my VTES friends from all over the world and spend some time with them. I have lots of memories and I want to share them – and get some new! Also, I have a few different things for the players, but I can´t speak about them right know. Sure there will be t-shirts for the entry, as always, but that´s all I can say at this point. I'm in talks right now with a few parties ... and that´s all I can say.

How are your feelings about VTES finally being printed again?
- It´s good that my beloved game will have a chance to conquer the world again! VTES definitely needs fresh blood – a new, young generation of players. And I'm very proud that my friends are behind this revival. Long live VTES! See ya during EC 2018!

RESULTS OF DOUBLE GRAND PRIX EVENTS COMING UP
No less than two European Grand Prix tournaments were played this past weekend. VEG Madrid was won by Raúl Olvera playing Assamite Black Hand stealth-bleed and VEG Budapest was won by Dávid Farkas playing Fakir al Sidi rush/wall. We will return to report about these events in the next newsletter, with TWDs and hopefully also interviews. Congratulations champions!

GERMAN CHAMPIONSHIP 2018 IN BOCHUM
A report from Hardy Range, Prince of Bochum:

20 players from 6 countries, approximately 6 man-hours of delay due to 2 traffic jams, 9 game wins in 13 games, 1 coin flip, and 21 good man-days of VTES. That, in a nutshell, is the result of the German Championship mid-April 2018.

Obviously, you might want more details... Well:
• There was a random prize support giveaway, where one player had the chance to win a print of the artwork from the card Danielle Diron (Advanced), signed by the artist, Carmen Cornet. So the print, sent from Spain to Germany, was then won... by the only Spanish player in the event!
• After the preliminary rounds, there was a tie for 5th place between two players. Ali Almadhi won his seat in the finals in a coin toss against Bram Van Stappen... but then recognized that all other players who had arrived in the same car (and who had already spent quite some time in a traffic jam that morning) would need to wait for him for their trip home. Thus, Ali gave up his seat to Bram. Sportsmanship!
• As completely usual for the German Championship, the title went to a player from Belgium... :-)

Now, for the real VTES stuff. The final table looked like this: 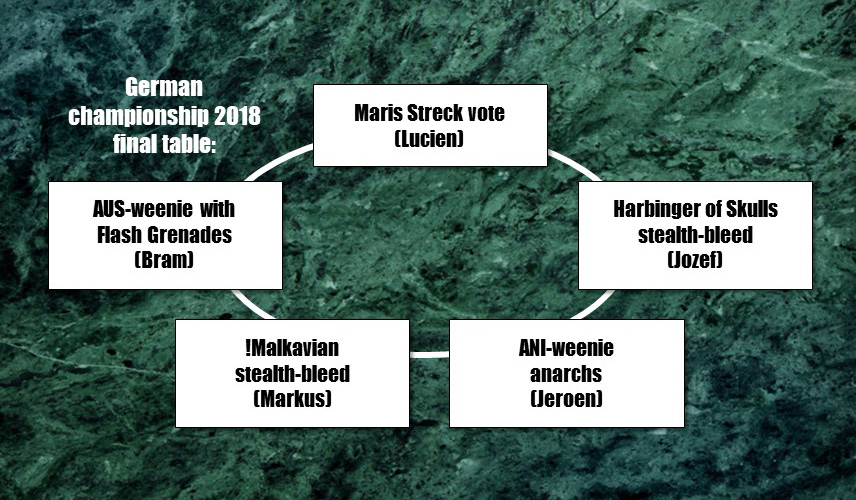 Interesting table discussions, some players heartily regretting their choice of seats, a quite long time with 5 players at the table... before, in the end, after approximately 1 hour and 20 minutes, everything collapsed, when Lucien annihilated the table with Anarchist Uprising and Ancilla Empowerment. The first vote removed something like 27 pool from the table, ousting three players simultaneously: Jozef, Markus, and Bram, so that Lucien, Jeroen and Markus had 1 victory point each.

The final fight between Jeroen's weenie horde and Lucien's high-cap royalty did not last long: Lucien managed to get Ancilla Empowerment in hand, and made Jeroen pay for the decision to play weenies that day. So Lucien won the finals with 3 victory points. Quite spectacular!

First, a comment from Bram Van Stappen, who originally built the deck played by Lucien: "Hey Hardy, the deck is from my hand. I played it once or twice on Lackey. Inspired by a deck from Marius. Lucien played Maris/Lutz before, but this was the first time he played this deck .... thanks again for a nice tourney!!!"

Combo (1)
1x Swallowed by the Night

VAMPIRE: THE MASQUERADE FIFTH EDITION IS ON PRESALE
We know that many of you are also interested in Vampire: The Masquerade, so we want you to notice that our friends at White Wolf now have made Fifth Edition available for preorder on www.modiphius.net. Looks awesome!

“It comes so soon, the moment when there is nothing left to wait for.”