Greetings fellow Methuselahs
New years – what do they mean? “Age is but a number” some people say, just before they are ousted by older and more powerful Methuselahs like me. Numbers are very important! For example, I have this thing for ousting my enemies in a certain order. I have to start at the left and then continue so, which can be rather problematic sometimes, when the next victim is defensive enough. So happy new year, and good luck with next prey!

FOUR NEW PRE-CONSTRUCTED DECKS EARLY 2019 RELEASE
As announced earlier this week, four brand new pre-constructed decks will be released in the first quarter of the new year. We asked Ben Peal, product director at Black Chantry and earlier also lead designer at V:EKN, some questions about these new decks:

How come did you choose four Sabbat clans for the these first pre-constructed decks from Black Chantry?
- A few years ago, Mike Nudd and I were approached to design a collection of pre-constructed decks as part of a product pitch for bringing V:TES back into publication. A Sabbat theme was chosen as a follow-up to the Danse Macabre set we developed for the V:EKN with the intention of additionally getting Danse Macabre published in printed card form. With a need for a product to help new players get started with V:TES, and with the game being published again by Black Chantry, we felt it was time to get these cards finally into the hands of the players. As for Danse Macabre, some of that set made it into the Anthology set we published and some of the crypt cards have made it into these new pre-constructed decks.

The clans are Lasombra, Toreador antritribu, Tremere antritribu and Tzimisce. Why these clans?
- We had a few design considerations when developing the decks. Rather than the usual “mix of everything” starter decks, we wanted to create decks that a new player could bring to their local playgroup and be competitive. We wanted them to be mono-clan decks for the sake of theme. We also wanted to offer a mix of strategies, with each deck bringing something different to the table. The Lasombra deck is a larger-capacity stealth-voter. The Toreador antitribu deck is a small-capacity breeder with Palla Grande. The Tremere antitribu deck is a Nephandus ally deck with some punch. The Tzimisce deck is an intercept-combat deck. I'm hesitant to call them “starter decks” as they're fully built and effective decks, but there's certainly room to add, modify, and tinker with them.

Are there new cards? And cards with new art?
- Three of the decks have some new crypt cards to help fill out their clans as well as some crypt cards from Danse Macabre. The Tremere antitribu deck doesn't – it's a classic build of the Antonio d'Erlette deck. There aren't any new library cards but the cards we've chosen for the decks should make veteran players happy.

Will there be more pre-constructed decks soon?
- We have another collection of pre-constructed decks currently in development and they'll tie into the V5 edition of Vampire: the Masquerade. We'll have more information about them to share in the coming months. I'm excited about this project as I'm looking forward to bringing V:TES into the present day as well as continuing it as the game we know and love.

The pre-constructed decks contain 89 cards at a suggested retail price of $22-24/€20. More information will follow, so keep an eye on Blackchantry.com and the social media channels. 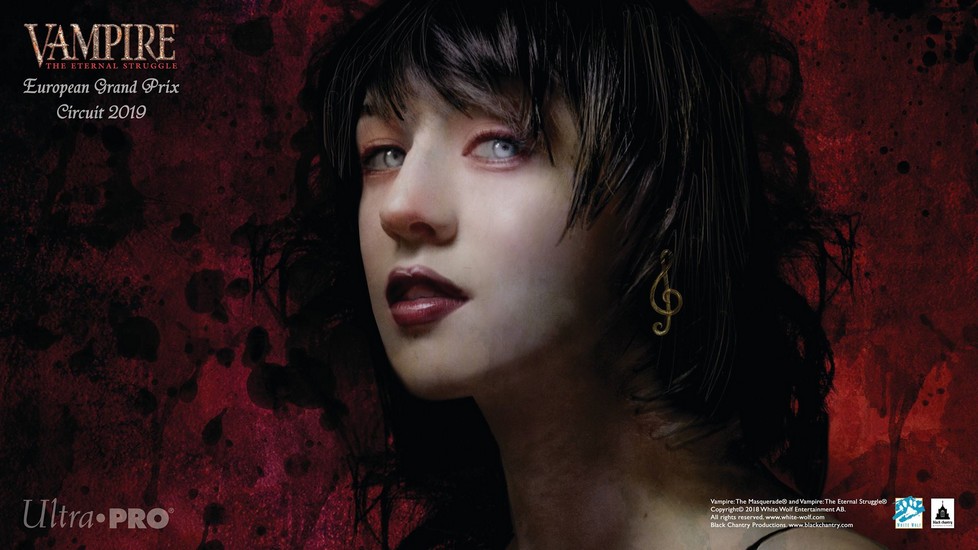 The official VEG 2018-2019 playmat, given to all participants, courtesy of our sponsor Ultra Pro.

VEG CZECH REPUBLIC 2019 SET
The VTES European Grand Prix Czech Republic 2019 will be played at Black Oil in Brno. More info at the Facebook event "VEG Czech Republic". Very welcome everybody – remember that all VEG players get the awesome playmat pictured above! 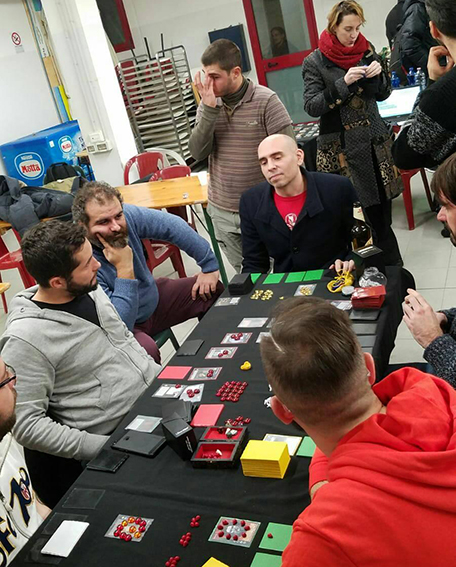 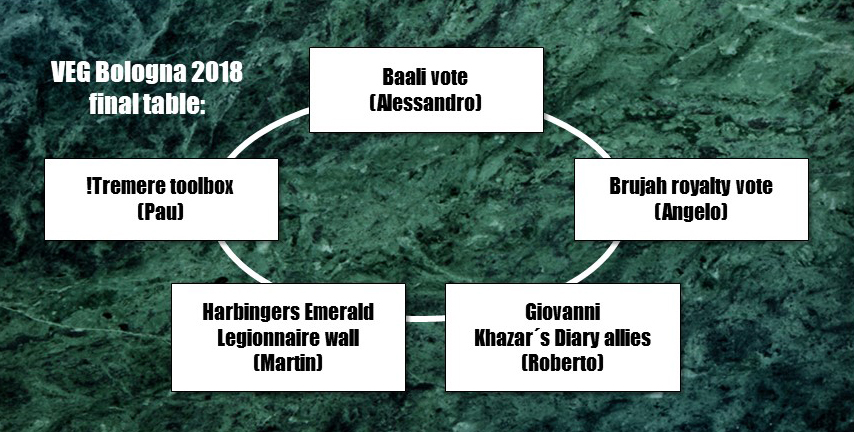 Bologna champion 2018 is Pau Vilar, scoring 0.5 victory points but winning with top seed position. Congratulations Pau! We haven´t seen a deck list yet, but reports talk of Valerius Maior, Orlando Oriundus and Frondator in the crypt. 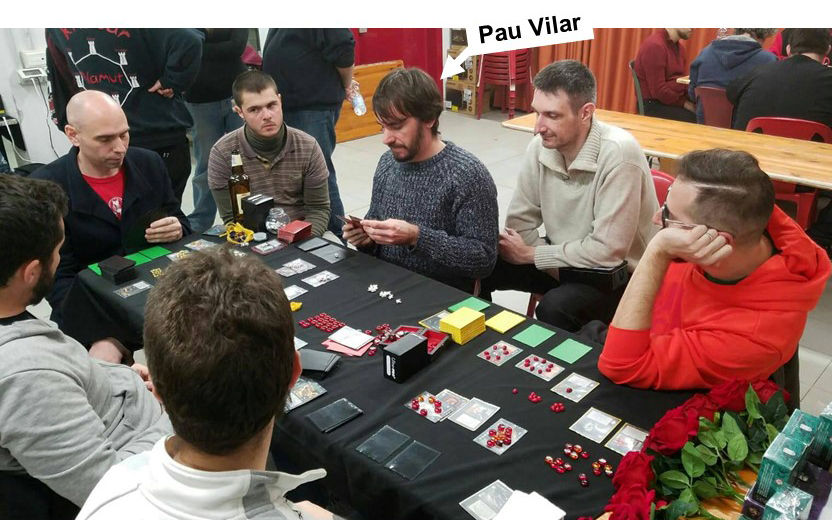 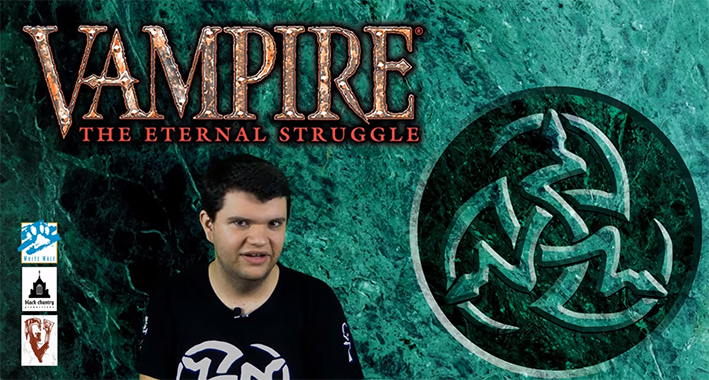 VIDEO INTRODUCTIONS TO VTES
Players in Palma, Spain, have started producing a series of video tutorials for beginner players. Two videos are published. Please, check them out and give feedback. Non-Spanish viewers can click the icon in bottom right corner to get English subtitles. 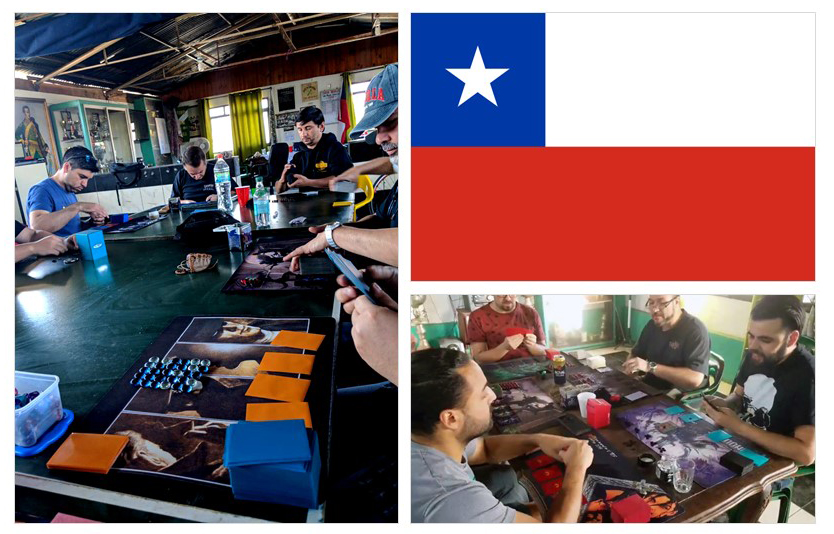 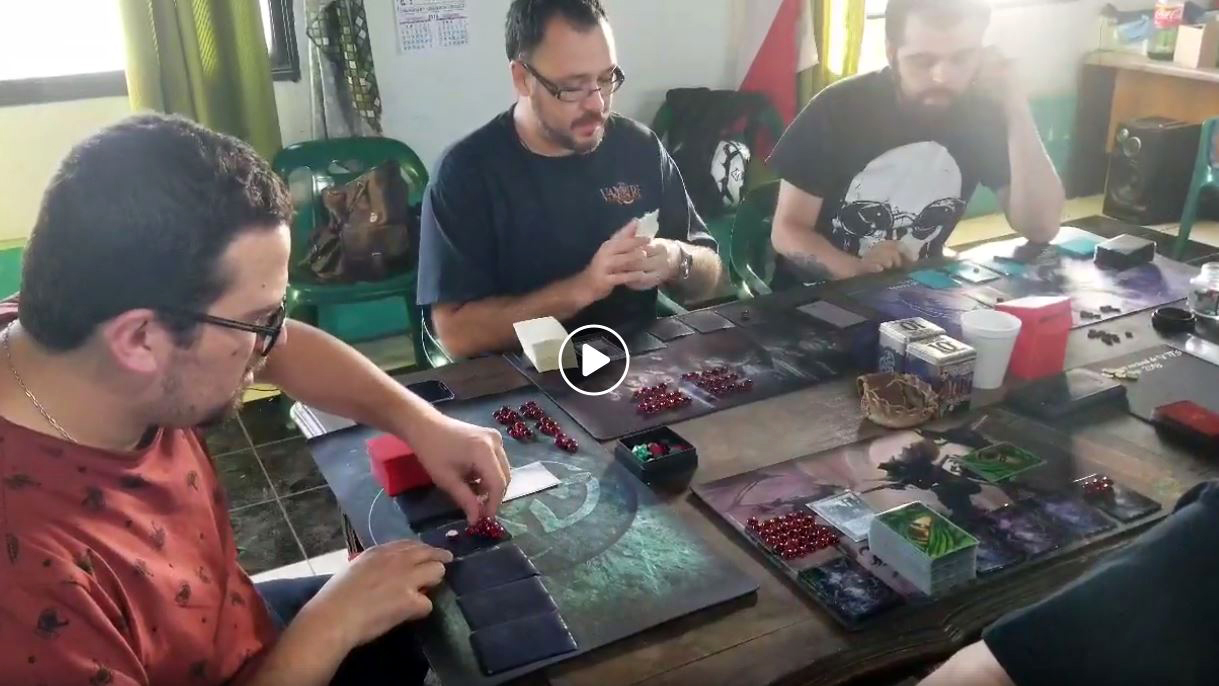 Miguel Saito Vásquez is the new champion with 3 victory points in the final, congratulations Miguel! Check out his tournament winning deck at: Chilean National Championship winner 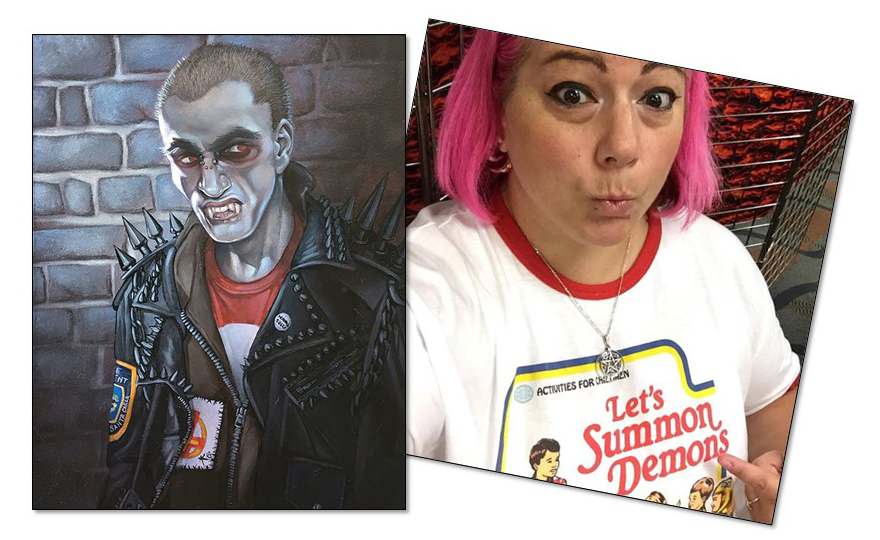 ARTIST IN FOCUS: HEATHER KREITER
This month we have the privilige to talk to Heather Kreiter. She has made beautiful art for VTES since Third Edition back in 2006, totally almost fifty pieces.

Heather, thanks for talking to us! What is your background as an artist?
- When I was 14 I discovered the artwork of Larry Elmore via the Dragonlance books. These helped me to discover the wonderful world of D&D. I then became obsessed with other artists, such as Fred Fields, Jeff Easley, and Clyde Caldwell. They were all oil painters, so *I* wanted to become an oil painter so that I too could work for TSR! That was the plan anyway when I was in Junior High.
I received my BFA in Painting with a secondary concentration in Illustration from Edinboro University in Pennsylvania in 1996. Even though I technically have a formal art education, I feel that I honed my skills more once I was out of school and was creating art for myself. To this day, all of my art is created via traditional methods. I work almost exclusively in either oils or markers.

What kind of assignments do you like?
- I know that when it comes to creating art, I am VERY slow. I do not have a “quick sketch” mode. I prefer several months notice on a project and having several weeks to work on several pieces. Basically one painting per week at the very least with a definite deadline so I can plan my work accordingly. I have two calendars and a dry erase board in my studio so that I can attempt to keep track of all of my projects.
With VTES, I definitely prefer working on the crypt cards as I feel most confident focusing on a single character. However, whether it's crypt or library, the darker and bloodier, the better. I've never been one to shy away from gore.

What artistical techniques do you prefer?
- Whenever I get assignments I like to take a few days and let the descriptions rattle around in my head so that I can “see” what I want to paint. Once I have my idea in place, I go in search of reference material from books, magazines, friends, etc.  I'll take bits and pieces from all of my source material and frankenstein it together in photoshop. Then, I'll make a sketch using the frankenstein piece for my reference, but I'll adjust everything accordingly to fit the project.
Once my sketch is approved, I'll transfer it to a gessoed piece of illustration paper, block it off with painter's tape and go to it. Usually these paintings are small enough that I can kind of cradle them in my arm to work on them. I'm a very “close up” painter due to the fact that I'm legally blind in my left eye.

You have made lots of art over the years. If you had to pick one piece, project or period, what are you most proud of?
- As a whole, I had the most fun creating Gengis, Zach North, and Daliah for the Anarchs Unbound set. Every single one of these individuals is based on someone I know personally. Gengis is a mohawk sporting, hearse driving individual I know from the PCS (Professional Car Society). Zach North is Star Wars illustrator, and my oldest con friend, Jeff Carlisle. Daliah, is my tattoo artist, fellow collector of MLP, and one of my best friends, JerZy Milner.

What work do you do mostly these days?
- In 2013, I pulled myself out of the freelance artist's pool in order to fully focus on my own IP, My Little Demon, a Garbage Pail Kids-type version of My Little Pony. I still continue to create original content for My Little Demon, but I've recently started to branch out into customizing pre-existing toys such as Imaginext Dinosaurs. When I learned that VTES was going to be produced again by Black Chantry, I had to dip my toes back in the pool. I can't not work on VTES! It's the only CCG I've ever actually played, back in 1995 when it was called Jyhad.

Thanks for this interview Heather – your commitment to our game is heartwarming, and we of course look forward to giving you new VTES missions. Check out Heathers site My Little Demon, her Facebook page @heatherkreiterart and and tweet @HeatherVKreiter

• In mid December, Heirs to the Blood and a restock of earlier products reached distributors and stores all over Europe and also Australia.

• The four Sabbat-themed pre-constructed decks are revealed – see above. Details about this will follow in the coming weeks.

• Anthology 1 will be out at the same time as the Sabbat pre-constructed decks, if all goes well.

• People ask for a new, better VTES rulebook. Bad news: You will have to settle for the current online one for yet some time. Good news: A new, better, illustrated and beginner-friendly rulebook is being produced. Black Chantry rules director Vincent Ripoll is in charge of the project at this stage – contact him via if you have any input on that. We plan to reach out for all kinds of testing and proofreading when it´s ready for that.

• American players have trouble getting hold of the European printed cards and those nice tuckboxes that they come in. This is because Black Chantry doesn’t have any store distribution in North America (except Chile, in South America). If you or someone you know wants to distribute VTES, please tell us at

• Ben Peal leads the design of the V5-themed box set. Setting issues have been discussed with White Wolf, and things are moving forward. More about this will be disclosed in the coming months. 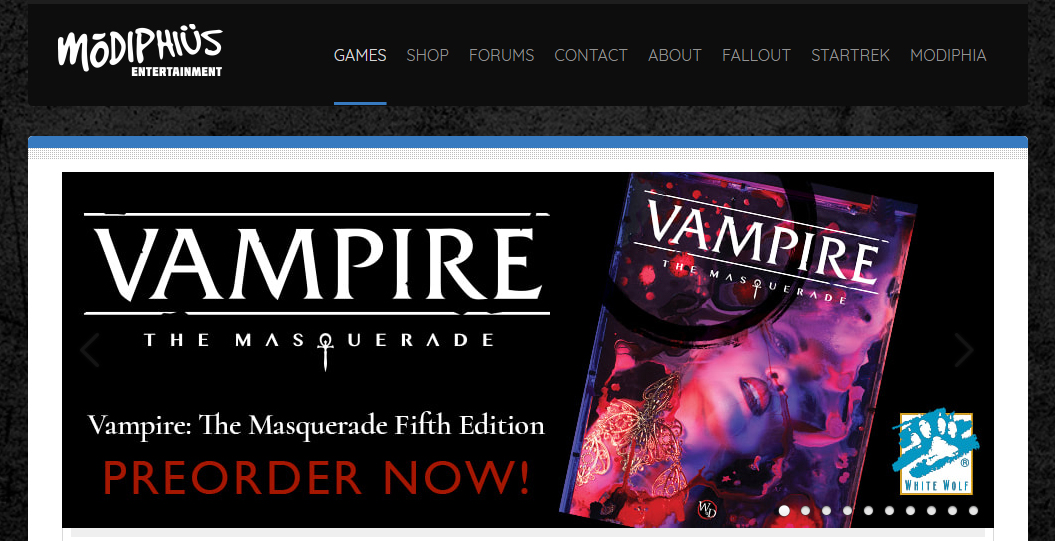 MODIPHIUS EMBRACES V5
This months most interesting news about White Wolf is that UK-based company Modiphius steps in to manage and publish the Vampire: The Masquerade Fifth Edition (“V5”) product line. Modiphius has until now only been in charge of the V5 distribution, but now gets a broader deal. So, what does this mean for Black Chantry and VTES players: Not much. Black Chantry is a licensee of VTES just as Modiphius is of V5. Black Chantry might need to bounce some V5-related stuff with Modiphius, but otherwise production of VTES continues as planned.