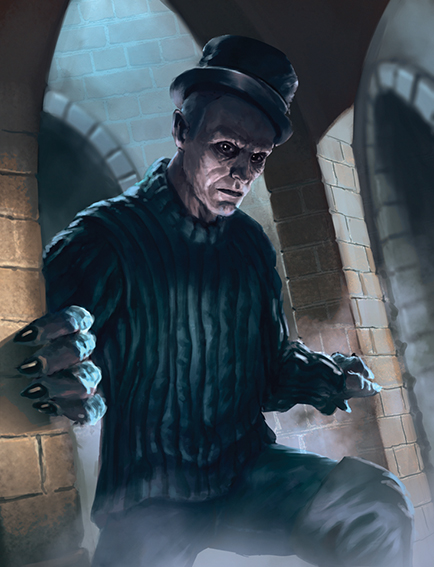 Happy New Year! May your bleeds be big and your ousts be plenty!

Hey, everyone! Time for another update on where we are now, where we're going, and how we're getting there.

So, where are we now?
Since my last update back in March, we've released the 25th Anniversary Set, a bundle of promo cards as well as the Continental Championship promo cards, and the First Blood demo decks. We've also had the first-ever translations of VTES into other languages, with our first products now available in Spanish and Portuguese. Many thanks to our partners at Conclave Editora for their help and work with making Portuguese-translated cards a reality! And on December 24, we launched our first wave of card singles available via print-on-demand through our partners at Drivethrucards.com! Reprints of Assamite and Quietus cards are available now, with more to come!

What´s next?
Russian translations are in development and more translations will soon be announced. We were hoping to get the VTES Fifth Edition Camarilla-themed box set out by the end of this year, but it's looking like it'll be the second quarter of 2020. It will include pre-constructed decks for Malkavians, Nosferatu, Toreador, Tremere, and Ventrue, plus all the game components required to play. As the conflict between the Camarilla and Anarchs is one of the central themes of V5 Vampire: the Masquerade, we're also in the middle of development of pre-constructed decks for the Anarch clans. We expect to start playtesting of those decks (and new cards for them!) at the end of January.

What else is down the road?
The struggle between the Camarilla and Anarchs will require follow-up expansions after the pre-constructed decks are released. This is partly due to moving into Group 6 with the Camarilla, partly due to Anarchs becoming a sect in their own right, and partly due to a lot of new canon material to work with. From there, we'd like to give the Lasombra and Hecata from V5 Vampire: the Masquerade proper treatment in VTES. What form that will take hasn't been determined, but we'll have a clearer picture on that when we have an opportunity to dive into some new material. We'll also get the 2019 promo cards reprinted in some form so you can all have access to them.

How are we getting there?
Something we've started with this year's Continental Championship promo cards is putting the "world" back into the World of Darkness, expanding the Princedoms to more cities and more places around the globe. That will continue with the Camarilla and Anarch decks. The Fifth Edition Camarilla decks will have the goals of providing an enjoyable experience within the box, teaching you how to play VTES, showing off the traits and qualities of each clan, and also being strong enough to be played outside of the boxed set. Expect to see some classic archetypes, such as Toreador Grand Ball and Ventrue Law Firm, but also some new twists, such as the bolstering of the Nosferatu. The Anarch decks will follow a similar path for the Anarch clans, such as Brujah and Gangrel, but will also see further development of Anarchs as a sect, with new Baronies and new Anarch three-way cards.

As always, many thanks to all of you for your continued support of the game and for your camaraderie!

As many of you hopefully noticed, Black Chantry Productions had a little surprise holiday gift for us all: the beginning of a VTES single card print-on-demand service. Check out "VTES Legacy Card Singles” at Drivethrucards, and read more about it in the official announcement made on December 24.

Unfortunately, there were some errors in some of the files, so some cards had to be temporarily excluded. They will be back when the files have been reworked and cards physically proofed.

Many players immediately asked – why start with these Assamite cards? We forward that question to Hugh Angseesing, CEO of Black Chantry:
- Hello! Assamites will be getting a new, modern VTES treatment under the name Banu Haqim. This mirrors the treatment within the wider World of Darkness. It felt appropriate to bring the older cards out as a legacy purchase for players to continue to use them within VTES and Drivethrucards seemed like the ideal way to get these older cards back out there. 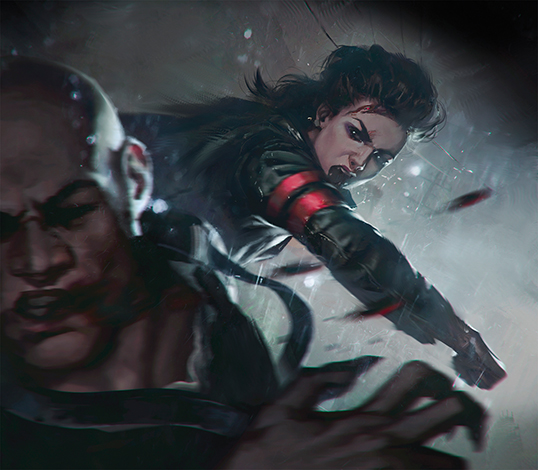 The German European Grand Prix tournament in Darmstadt will be played on March 21, 2020.

The upcoming North American Cup tournaments will be:
• Charlotte, North Carolina on January 11, 2020

VEKN will try to add essential updates for these events at the two pages VTES European Grand Prix 2019-2020 and North American Cup 2019-2020. 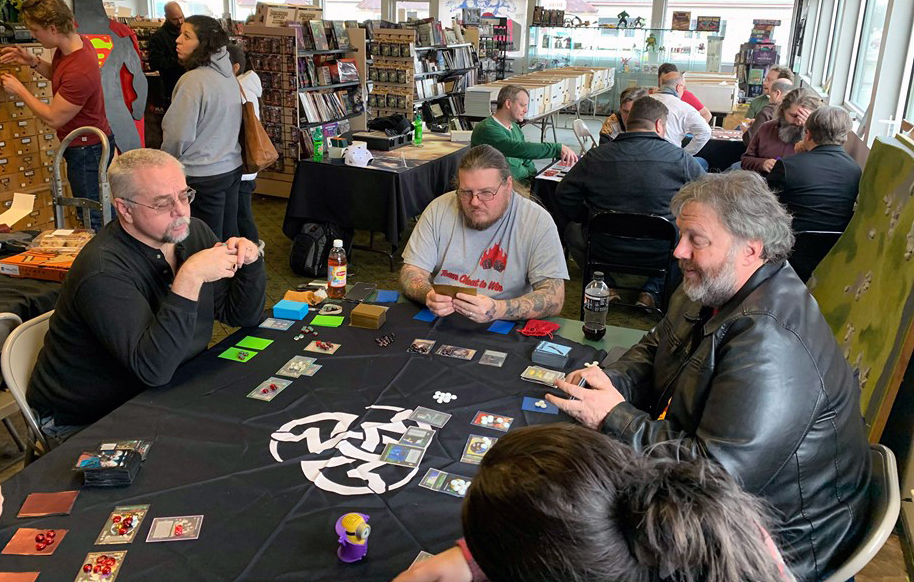 Part 2 of the North American Cup was played on December 19 at the Comic Shop Plus in Heath, Ohio. 15 brave Methuselahs turned up, and these were the standings after three rounds: 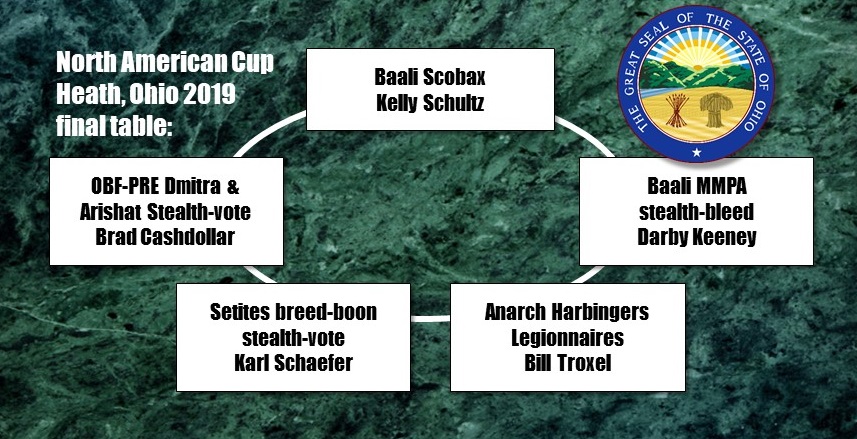 Congrats Bill Troxel, who got 4 victory points, while Brad Cashdollar scored 1. Remember that for a total list of all participants' results, you can always check the VEKN Event Calendar, in this case event number 9431. 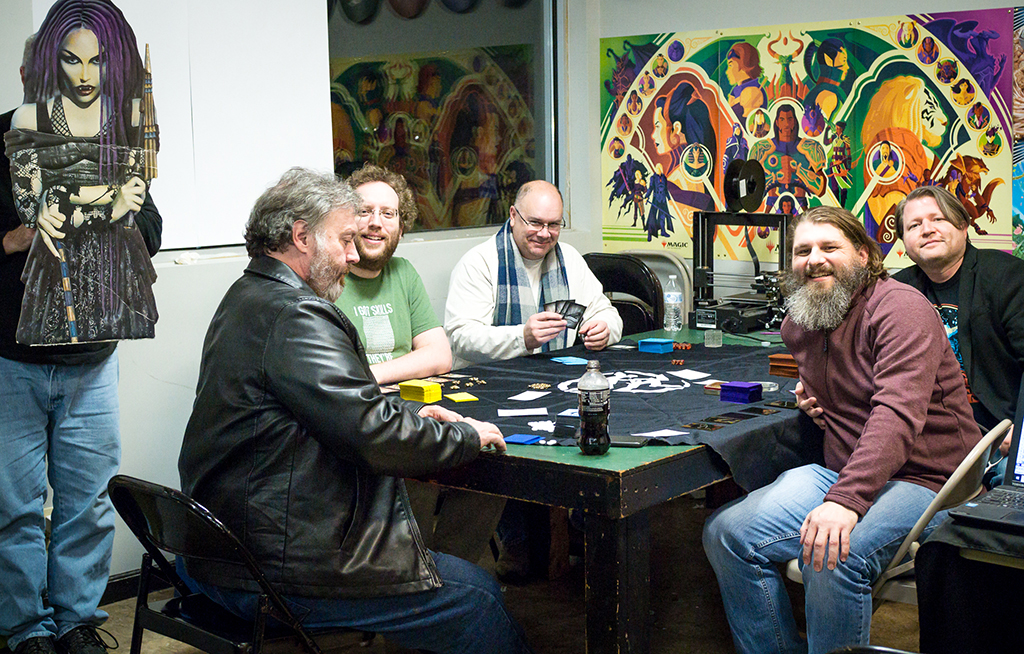 The next cup tournament is in Charlotte, North Carolina on January 11. Thanks to organizer Mark Loughman, other volunteers involved and of course to the players! 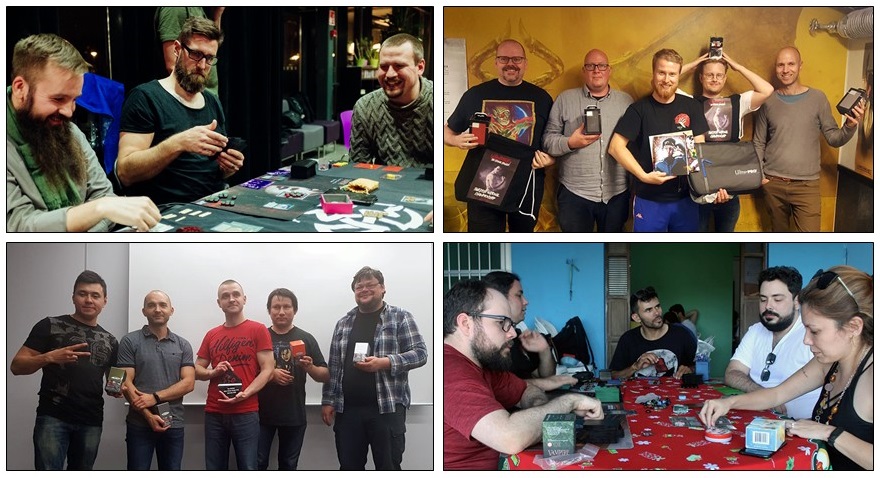 The main purpose of the Vampire: Elder Kindred Network is to organize tournaments, and o´boy, what a year of tournaments is has been. During the year, no less than 210 events are registered in the VEKN event calendar, held in thirty different countries:

February: Four Sabbat preconstructed decks hit store shelves, as did Anthology 1 (a reprint of most of Berlin Anthology).

February: The highly anticipated “Bloodlines 2” computer game is announced. Not a VTES event, but it will be important, because possibly more people know the World of Darkness setting from the original 2004 “Bloodlines” computer game than know it from Vampire: The Masquerade.

March: The VTES Card Creator is launched at Drivethrucards, a way for you all to create your own VTES crypt cards.

April: The first new tournament promo cards in a long while are made available. Later during the year they are followed by more promos, most notably the Continental Championships 6-cap Barons.

April: The first round of playtesting of six preconstructed decks for VTES Fifth Edition begins.

May: Translations to Brazilian Portuguese and Russian are announced. The Brazilian decks became a reality in November, while the Russian decks will appear in 2020.

June: Corwin Brindley wins the North American Championship with a Camarilla bigcap MMPA deck. He later started the Struggle, Interrupted Youtube channel, one of the many examples of great VTES online content this year.

August: VTES celebrates 25 years as a game! Black Chantry honours this by producing the 25th Anniversary product, including the “Reign of Stanislava” deck and other goodies.

September: VEKN publishes a Code of Ethics document to remind members to look after each other and be respectful of differences.

October: The Spanish translation of the First Blood decks is announced, and turns up in stores a month later.

December: The first Japanese tournament ever to be registered in the Tournament Winning Deck Archive is played! The winner in Tokyo is Francisco Conde, playing a bigcap Lasombra stealth-bleed deck. This is one example of VTES spreading all over the world once again! 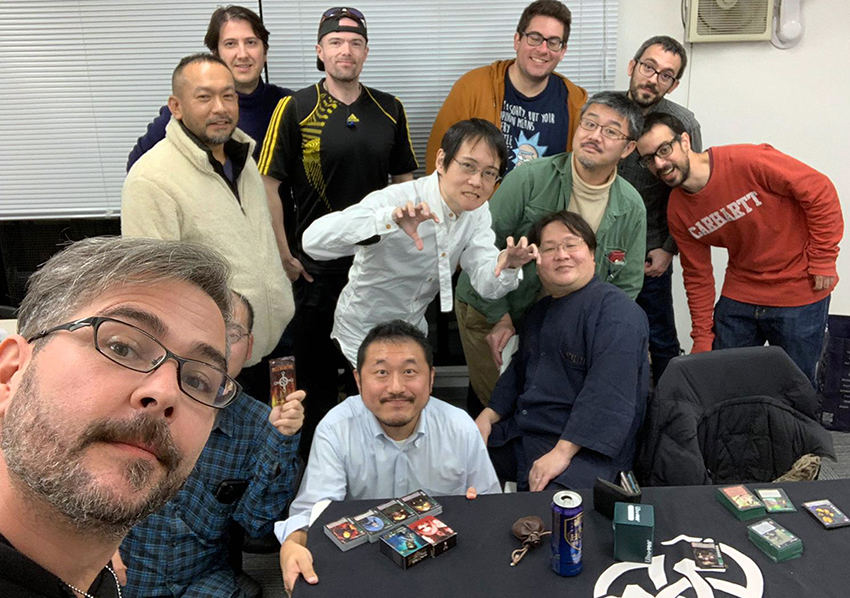 The VEKN Inner Circle wants to thank all you who make all this VTES fun possible – VEKN volunteers, players, content creators, sponsors – and look forward to even more tournaments, products, content and community friendship in 2020. With VTES Fifth Edition box set in the works and the new North and South American Cup series launched, we anticipate a bright future for our beloved game. Keep on bleeding!

• The first batch of VTES Legacy Card Singles is up on Drivethrucards. In this new way of print-on-demand, you can freely pick and choose how many of each card you want to buy.

• Playtesting round 3 of the Fifth Edition preconstructed decks is ongoing. Included is also a draft of the abbreviated rulebook that needs feedback from players.

• For more about what is going on, please read Ben Peal's message in the beginning of this newsletter. 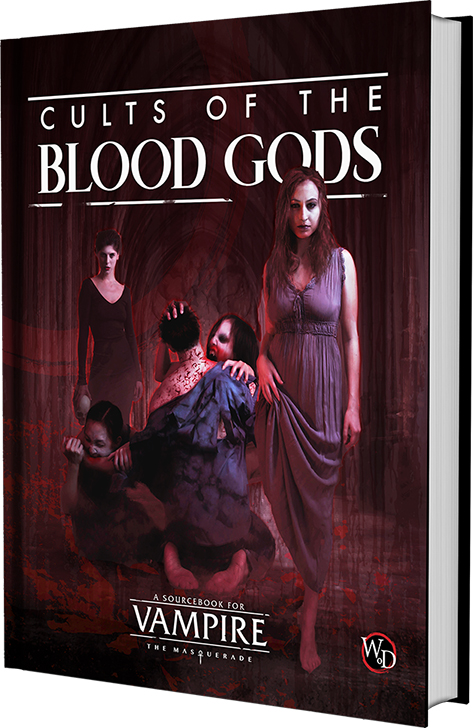 Some highlights in Vampire: The Masquerade and World of Darkness news this month:

• Vampire: The Masquerade source book “Cult of the Blood Gods” from Onyx Path is up on Kickstarter, currently just above 105.000 dollars.

• Preorders of Vampire: The Masquerade chronicle “Fall of London” from Modiphius have begun, with PDF available immediately.

• The fourth season of the actual play Twitch show “LA by Night” announced for January 2020.

• White Wolf has revealed that the production of the new core rules for Werewolf: The Apocalypse will be licensed to Hunters Entertainment.