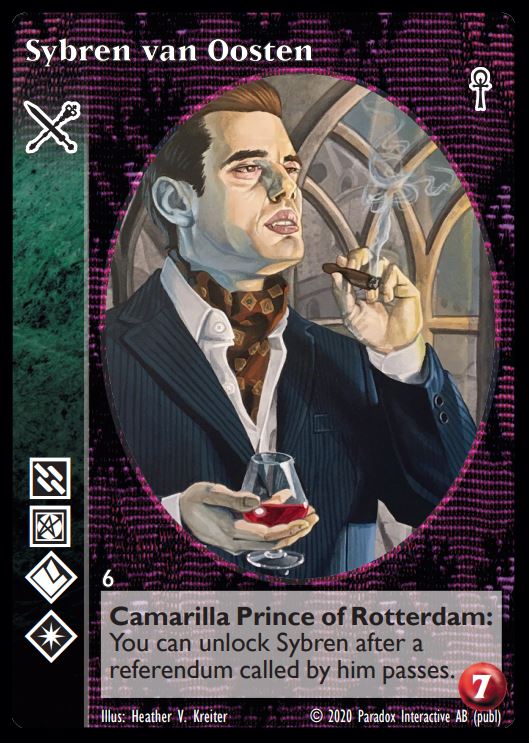 The VEKN recently announced five cards being banned from tournament play as of August 1, 2020. This caused some commotion in social media and elsewhere, and some clarifications are needed. Henrik Klippström, Marketing Ghoul of Black Chantry Productions, answers some frequently asked questions:

Why were the cards banned?
- The five cards contain words or images that are associated with real world racist caricatures.

Why was this important to do right now?
- We are currently preparing a large batch of older VTES cards for print-on-demand at Drivethrucards.com, so we needed to make this cut now. The card Terrorists was already cut from the batch published in December 2019.

Was this decision in haste?
- No. These cards have been discussed for a long time, and more so since Black Chantry got the license to produce VTES in 2018. One example is the VEKN forum thread "Card name change suggestion" with posts by Black Chantry Product Director Ben Peal. The VEKN National Coordinators were informed.

Are the banned cards being replaced?
- Yes, eventually. Two of them have already designed replacements – these will be handed over for playtesting in the first round of the upcoming preconstructed decks (Banu Haqim, Brujah, Gangrel and Ministry). New artwork has been commissioned.

Why didn´t you replace these cards when the bans were announced?
- When we decide something is wrong we want to fix it as quickly as possible. In this case it means removing cards that detract from the game whilst taking a little longer to consider what cards we want fulfilling a similar function. Card design, playtesting and production of new artwork takes time.

How will the replacement cards be distributed?
- Most likely they will be promo cards handed out at tournaments and other events, but they might also eventually appear in new products and on print-on-demand.

This month we talk to Neil Muller, NC of South Africa, about his background and current activities.

Hi Neil! When did you start playing VTES?
- I first played the game sometime late in 2002. A couple of my boardgaming friends had played the game previously, and we decided to give it a try. The first game we played was not the smoothest experience, since none of us was that familiar with the rules or the cards, but the predator-prey dynamic really resonated with me, and I was hooked.
Fortunately, one of the local comic & games stores had some starter decks and boosters available fairly cheaply at the time. The first decks I bought were the Camarilla Edition Toreador deck and the Black Hand !Nosferatu deck, which made it quite easy to get into the game. The shop also put us in contact with some of the other local Cape Town players, and so I started getting more serious about the game and actually learnt the proper rules.

What do you like most about the game?
- The predator-prey mechanic is obviously one of my favourite aspects – it creates interesting table dynamics and complicated decisions about how the table will fold.
I also really like that VTES has a large card pool. It allows for tremendous variety in decks, and variation in play. I love trying to come up with interesting combinations and card interactions – these often aren't very effective, but it's very satisfying to pull off a complicated combo play.

What is your all-time favorite deck?
- While I like a variety of decks, ultimately my favorite remains the !Nosferatu Potence combat build around Beast. My first version of it was based on the Black Hand starter, and it was the first deck I constructed that was reasonably successful in local games. It is by no means the best deck I've built, but it has remained a deck concept I continually return to and try to tweak.

What other decks do you currently like playing?
- I have a collection of decks, like the Beast deck, that I return to on a regular basis, but I'm a keen deck builder. I mostly build combat and political decks, as those are archetypes I enjoy playing, and lend themselves to interesting challenges between balancing the number of the different types of cards. I also put together the odd somewhat silly trick deck, like grafting Serpentis onto the Samedi, so you can combine burning the Edge for Enticement with Off Kilter to get it back. Of late, I've being trying to build decks with various Assamite crypts, with mixed degrees of success.

Do you think you have a special “style” of playing?
- I don't think so. I'm often guilty of slow and over-analytical play, especially if games get tense, but I don't think anyone would consider that particularly special.

You are the National Coordinator for South Africa. How is the situation for VTES there?
- The South African scene used to be fairly active, but a number of players drifted out of the game when it went out of print after Heirs to the Blood. Unfortunately, it's been hard to attract new players to the game since it came back into print. Shipping costs to South Africa are unfortunately rather high, which makes it a relatively expensive hobby. Fortunately, we do now have a local supplier in Pandemonium Games, which has helped make cards more easily available.
Currently, myself and the South African Princes are trying to spread the game by running demo games at the local gaming conventions and hosting social games at some of the local game stores. I'm hopeful that the Fifth Edition release will help as a nice single purchase that can get gaming groups into the game.

Thanks for the interview Neil! Good luck with coordinating!

• The “unlimited edition” of the 25th Anniversary set is now in stores, in English, French and Spanish.

• The whole Black Chantry crew has been busy with the last touches on the Fifth Edition box, mostly the new, illustrated rulebook. It will be 50+ pages in a A5-ish format, complete with glossaries and a Q & A section on especially tricky things about the cards and mechanics present in the five Fifth Edition decks. The box will also contain five “help sheets” (one for each of the five decks) and all counters you need to play.

• The Fifth Edition spoiler season has been gruesomely long due to the pandemic and because some cards were saved to be previewed by stores and media. But soon everything will be revealed, and so far, most seem to appreciate both art and cards. It is a starter friendly set, so veteran players might be missing some new, more advanced cards, but that is being worked on …

• … because the next four preconstructed decks are ready for testing: Banu Haqim, Brujah, Gangrel and Ministry. All these will include both new crypt cards and new library cards. The first drafts will be sent to playtesters within shortly! 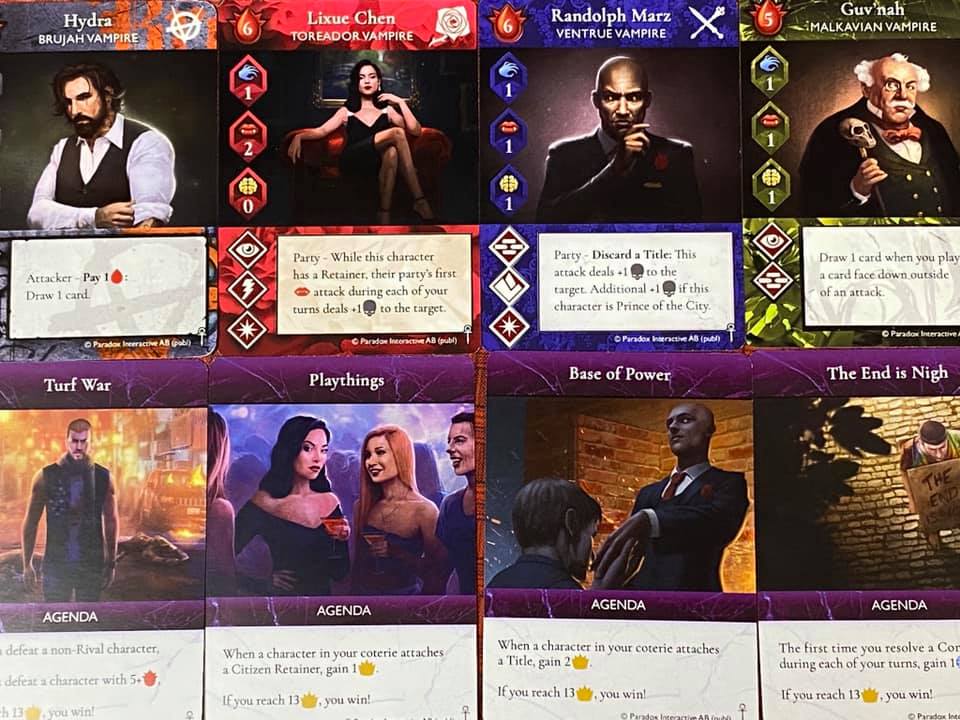 • The official World of Darkness Discord server has opened! This is a place for fans and creators to discuss and maybe find a playgroup. Join at discord.gg/W2edCnU

• Some card images of the upcoming Vampire: The Masquerade Rivals Expandable Card Game from Renegade Game Studios have been made public by Man vs Meeple (see above). It seems quite different from VTES, being a game for 2-4 players. It will be interesting to see how fun it is!

"Some are wise and some are otherwise."