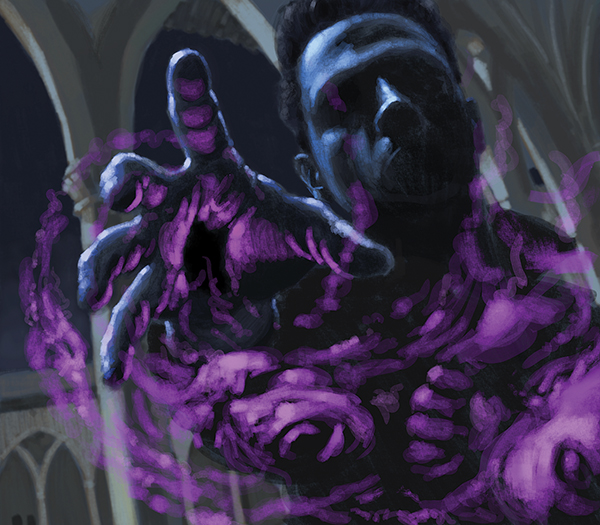 We apologize for this delayed newsletter. The physical tournament activity is low, but some things are happening! 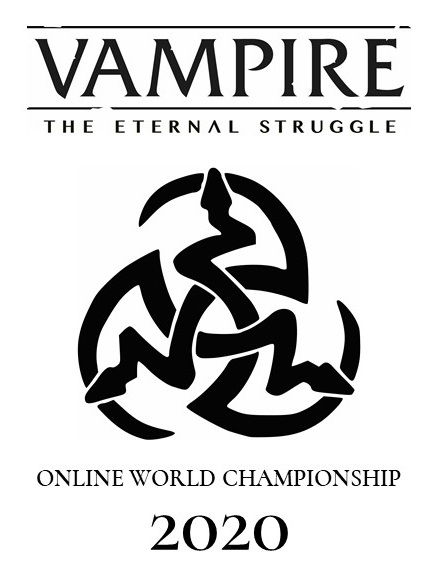 Igor Beslin and Rudolf Scholz will organize this 6 week event, played using LackeyCCG and Discord. It begins on Sunday 18th of October and runs each Sunday ending on the 22th of November. Black Chantry supports with prizes! For details, check out the related VEKN.net forum thread.

In the absence of physical events, quite a lot of the community turn to online VTES, especially on LackeyCCG. With the help of Igor Beslin and Rudolf Scholz we have compiled this summary of online events this year:

In 2020, so far 24 online competitions, tournaments or leagues, have been played. Igor Beslin has organized four of these events:

• The first competition of the year was a league testing a new crypt contest rule, that was later officially announced and tested again by Black Chantry Productions. It started on the 13th of January and ended on the 23rd of February. Igor caught this idea from a Brazilian player, who had posted it on VEKN.net in 2019 and wanted to see how it would work. 31 players in total attended; 18 from Europe, 9 from North America, 2 from New Zealand, and 1 each from Mexico and Brazil. The winner was Marcin Krom from Poland, playing a Black Hand toolbox versus Malkavian´94 bleed, Massassi combat, Dom-Obf bleed and a Imbued toolbox.

• The next league was “Camarilla Revolution”, which started on the 13th of March and ended on the 27th of April. It was played with regular Standard Constructed VEKN rules. 37 players attended; 28 from Europe, 3 from North America, 3 from Brazil, 2 from Mexico and 1 from New Zealand. The winner was Igor Beslin from Serbia, playing The Unnamed bleed in the final, against Montano Baltimore Purge, Black Hand toolbox, Toreador AAA vote and Emerald Legionnaires wall.

• The third league was “Not Unique Vampires”, running from the 10th of May to the 22nd of June. This league used a special crypt contest rule, where all contested vampires remain in play but still requiring Methuselahs to pay for contesting. It was officially supported by Black Chantry with prizes for every participant and additional prizes for all finalists and the winner. Even though there was a lot of discussion in forums about the contest rule test, a record of 53 players in total participated, among them EC 2019 champion Otso Saariluoma and 2019 Online World champion Milutin Melka. 43 players were from Europe, 3 from North America, 6 from Brazil and 1 from Saudi Arabia (who now lives in Germany again). The winner was Marius Iscru from France, playing Emerald Legionnaires toolbox in the final against True Brujah toolbox, Fanchon & Malgorzata toolbox, Shambling Hordes rush and Jost & Rebekka bleed.

• The fourth event was “4 Eternal Nights”, a Standard Constructed 2 rounds + final multi-deck tournament that started on the 11th of September and ended with the finals played on the 20th of September. 14 players attended; 8 from Europe, 2 from North America, 1 each from Chile, Mexico, Brazil and Saudi Arabia. The winner this time was Jay Kristoff from USA, playing a Gangrel toolbox facing Malgorzata & Tzimisce toolbox, Blood Brother Chicago rush, Ventrue antitribu grinder and The Unnamed toolbox.

• The fifth event was the Storyline League “Mad World”, with a prologue written by Jan Erik Söderman. It was played from the 10th of July up to the 28th of August, with the usual Storyline crypt rule (75% from one single clan) and the special rule that the first vampire or Imbued put into play by every player started with a Vampiric Disease counter. 12 rounds were played, 31 players attended in total. The winner in a final described as a “5 player chess game” was the German player Jens Niemann, with Toreador AAA wall against Guillaume Real Estate toolbox, Emerald Legionnaires wall, Emerald Legionnares bleed and Malgorzata & Tzimisce toolbox.

On the 13th of June, UK National Coordinator Paul Jones organized the “Bleedfest”, a VEKN Standard 2 rounds + final tournament with 18 players attending. The final was won by Rudolf Scholz from Germany, piloting a Giovanni bleed deck against Kiasyd bleed, Dementation bleed, weenie Computer Hacking bleed and yet another Dementation bleed.

In addition to all these events, an additional 7 tournaments (that we know of) have been organized in Brazil, 4 in Spain, 1 in North America and 2 leagues in Mexico.

We thank Igor and Rudolf for this summary, and of course hope for many more online events in the future. Thanks to all of you who organize events – remember that you can have an online tournament sanctioned by adding them to the VEKN calendar, just tag it with "online"! 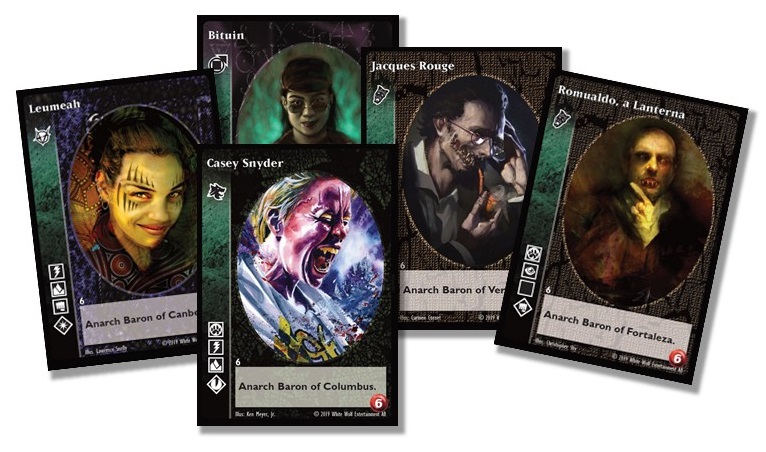 AN UPDATE ABOUT PRIZE SUPPORT

• Black Chantry will continue helping with promo cards and products as prizes. This is normally at a “raw cost”, but sometimes for free, mainly to large events like continental and national championships, Grand Prix events, etc.

• There are many queries around custom prizes. If you want to make custom prizes (edges, counters, deckboxes, playmats, t-shirts, etc.), ask . These are the requirements:
- In the mail, be specific about what you want to make, for what event/events and (if any) what art you want to use.
- Never sell the item. Entry fee for an event is fine!
- After the event, mail in photos of the product for the company records.


The Catalan league has been running since last year, with a total of nine events gathering about 70 players. On October 3rd, the top 25 players were invited to the final tournament in Reus, Spain.

Congratulations to Aldo Fernández D'Ambrosio, 4 vp winner in the final! This is his master heavy tournament winning deck:

The other finalists were José Luis Manuel, Ricard Díaz Vicario, Sergio Bolsico Silverio and Marius Peña Beltri - check out their decklists at the official event page.

Thanks to organizer Miquel Jorge Tortajada, sponsors and others that helped! 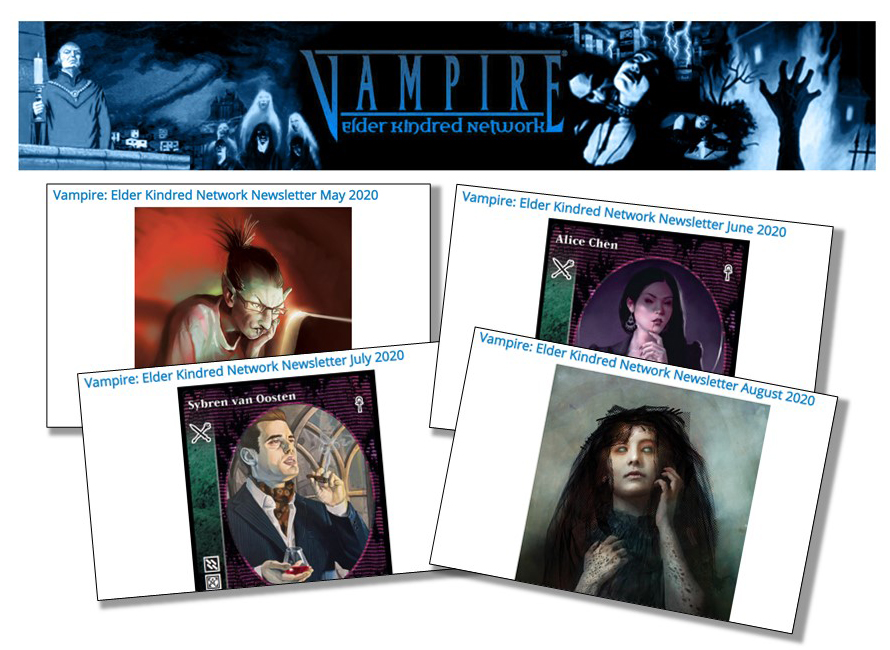 Do you want to create content for the VEKN newsletter? Things that might be interesting to publish are:
- tournament reports
- strategic articles on a deck or deck archetype
- player interviews
- just about anything else that relates to VTES that is reasonably well written and not too long (2,000-6,000 characters including blanks seems about right)

Help with images, graphics, editing and proofing will be provided, but note that VEKN is a volunteer organization – contributions are paidd for only in kind words and eternal gratitude! Send your ideas to . The same adress works if you have ideas for content someone else could write, or just general feedback on the newsletter. Hope to hear from you!

• As many of you probably noticed, Fifth Edition has run into more printing problems and is delayed. A new, hopefully final, release date will be communicated in mid October.

• The very meaty round 1 report from playtest coordinator Darby Keeney just landed in Black Chantry mailboxes. The four preconstructed decks (Banu Haqim, Brujah, Gangrel and Ministry) received mixed reviews, and the design team led by Ben Peal will now adapt them and prepare for round two of playtesting.

• In the beginning of September, the Library card section of the Drivethrucards VTES Card Creator was officially launched. Try it out if you haven´t already!

• The preview art by Ginés Quiñonero at the top of this newsletter is for one of the circa 400 cards that soon will be added to VTES Legacy Card Singles at Drivethrucards. Stay tuned for more news about this! 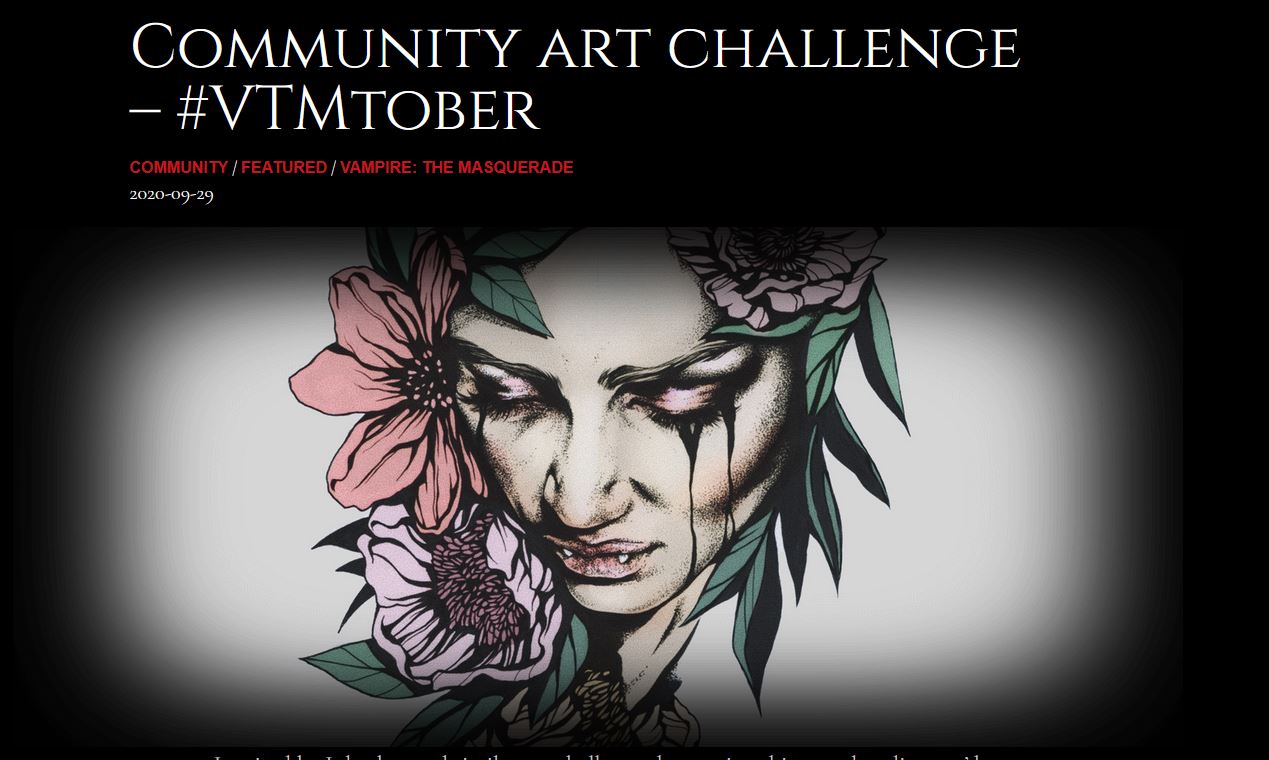 • #VTMtober is community art challenge for anyone who want to draw something Vampire-related.

• The second issue of the Vampire: The Masquerade comic is in stores.

• "Vampire: The Masquerade – Shadows of New York" is out now for PC, PS4, Xbox One and Nintendo Switch!

• The main themes of the World of Darkness News show in the recent weeks have been Wraith: The Oblivion - Afterlife! (September 3), VTM novella writer Caitlin Starling (September 17), Vampire: The Masquerade - Night Road (September 25), Werewolf: The Apocalypse - Heart of the Forest (October 1) and artist Amy Wilkins (October 8).