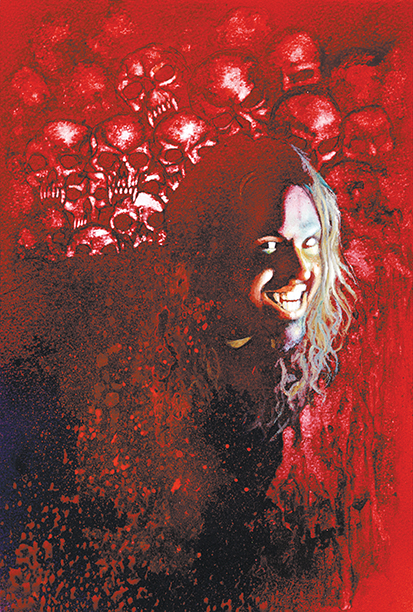 John Boltons art for the 1996 classic The Sabbat card
Mitchell, the Headhunter, now in print again.

Since earlier, cards for Assamites, Giovanni, Lasombra, Followers of Set and Ravnos are up on VTES Legacy Singles at Drivethrucards, and now also cards for Panders, Salubri and Tzimisce are available. Totally it´s 159 cards in this April update, including many player favourites such as War Ghoul, Legacy of Pander and Neutral Guard.

Hugh Angseesing, CEO of Black Chantry Productions, why did you prioritise these clans for print-on-demand now?
- We have put clans and disciplines on Drivethrucards as they have rejoined Vampire: the Masquerade Fifth Edition and we can see which cards won’t be being reused in a future retail set – for example Vicissitude cards will instead be represented with an amalgam power for the new Tzimisce.

Are there any plans to put more “staples” on print-on-demand, so one can order a whole custom-built deck?
- More cards will be added, and this will include more staples. However, our focus is getting cards which are not available in retail up first.

A lot of VTES players live in Europe – is there any hope for a print-on-demand service on other continents than America soon?
- We continue to work with Drivethrucards to locate a print-on-demand printer in Europe, which is about 60 percent of the VTES community. Covid and rapid changes to costs have slowed that process down along with printers not being totally comfortable with the “on demand” bit, i.e. please, don’t print 1,000 Eyes of the Dead just in case…
However, note that UK and EU buyers now should have value added taxes calculated at checkout to reduce much of the risk of ordering overseas, though I understand postage is still more than we would like.

What comes next for print-on-demand?
- Our rules director AND layout guy Vincent Ripoll are working on the next cards to go up on Drivethrucards, and that is more bloodlines cards. The process involves us looking at the card set we have chosen and checking that we have the artwork or deciding if the artwork can be refreshed. Sometimes brand new art is needed, but a card needs to sell about 1,500 copies to breakeven, so some cards might not be worth creating new art for! Then we review the card for simple changes, for example, cost reduction or perhaps added stealth, and then modernising the card text to fit current wording templates.
About that last bit, we’d love to hear from YOU if you have simple recommendations for cards going up to be fixed. But our focus with design and playtesters is on new cards rather than updating everything that has come before!

To make it easier to navigate the offer, a complete list with all Vampire: The Eternal Struggle Legacy Singles is available separately.

Note also that all nine Fifth Edition preconstructed decks are now available on Drivethrucards, in English, Spanish, French and Latin!

EUROPEAN CHAMPIONSHIP 2022 IN HELSINKI IS _ON_!

Finally, Finland gets to welcome you to a EC. The official website is updated with information about Helsinki, Ropecon and the tournaments, and the pre-registration will begin soon. Stay tuned for that in May! 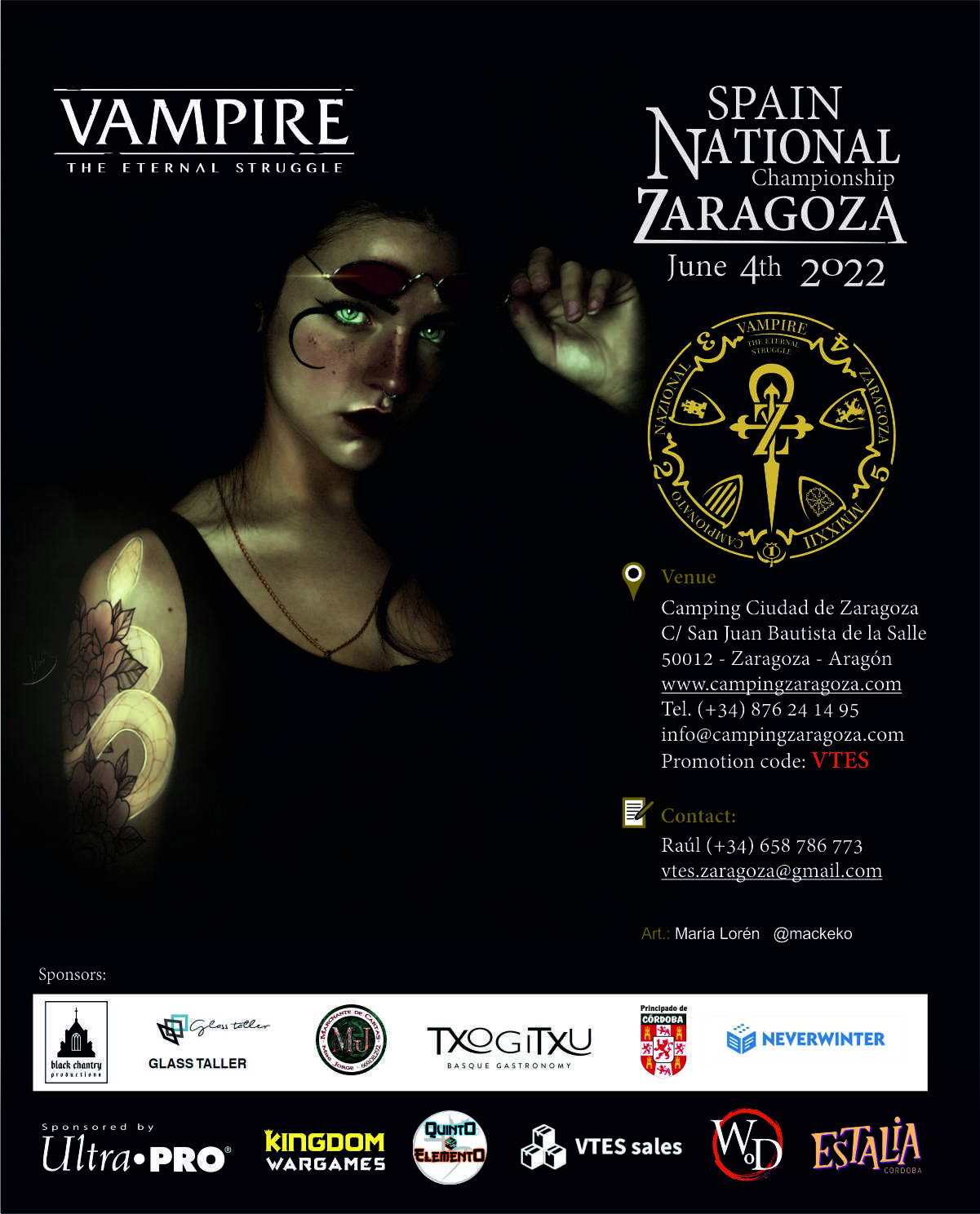 Also, of course, keep an eye on the VEKN Event Calendar - VEKN sanctioned events are always registered there! 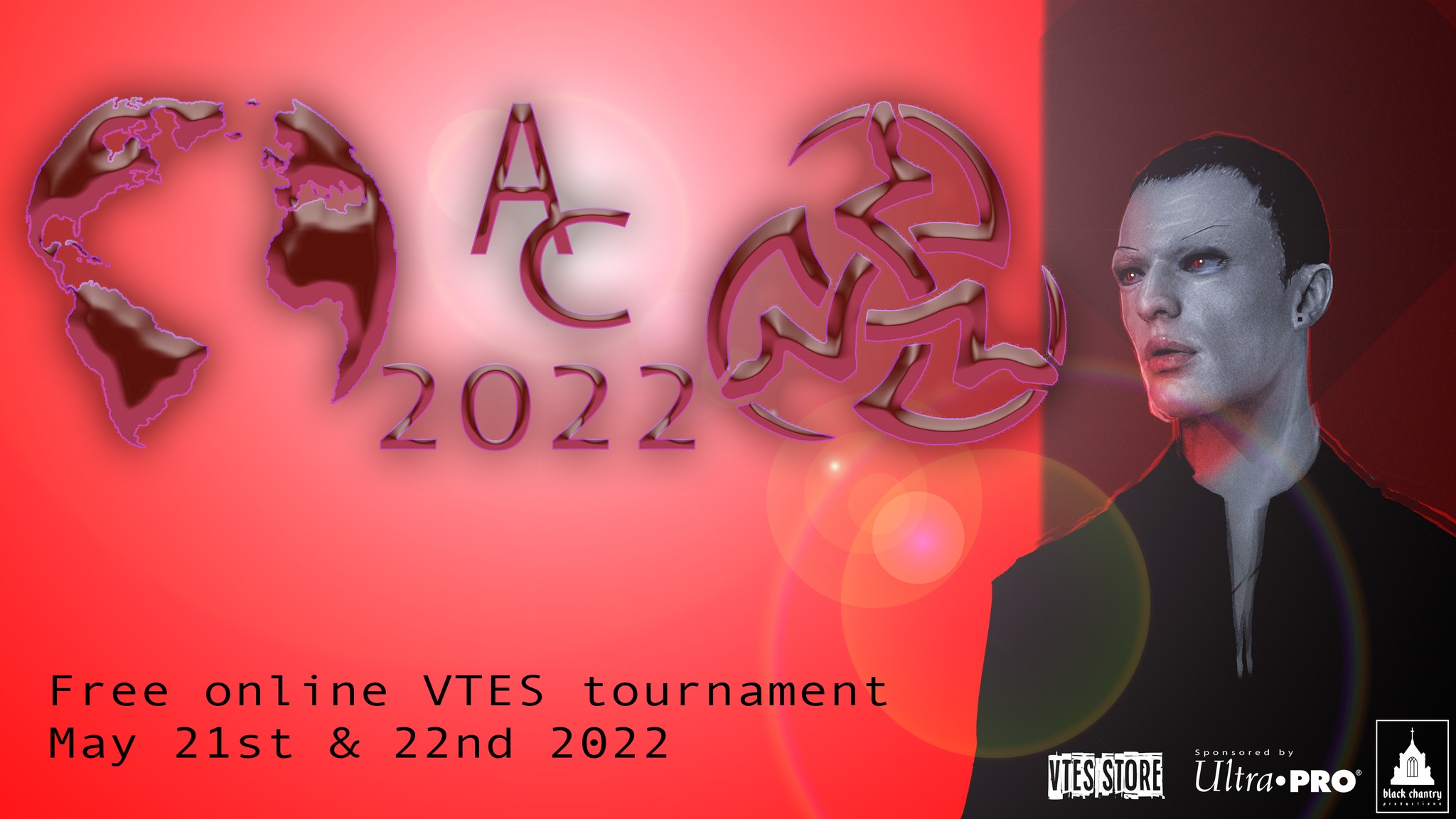 This will likely be one of the largest online VTES tournaments this year, played on Lackey May 21-22. Learn more on VEKN Forum: Atlantic Cup 2022 and register on discord.gg/QD3GbBuKS2.

• Know anyone going to big games fair Modena Play in Modena, Italy on May 20-22? There will be VTES demo games hosted by Camarilla Italy (large Vampire LARP community) and Italian National Coordinatior Simone Zanni. Welcome to that booth, and please send curious people there!

• Karl Schaefer of KGS Cards is doing wonders for VTES. Not only does he distribute the game, but he also writes nice articles, most recently a “Evaluating”-series about the New Blood packs. Check them out!

• We have mentioned the AWESOME French-language Carnet d´un Diableriste in this space before, but we have to do it again. Last month it had unboxing-videos of the New Blood packs. Totally great – what wouldn´t we do for this content in English?!

• VDB is one of the best online card utility tools, maybe the very best. You probably know that already. But now it has changed URL, so update your booksmarks, etc – now it´s at https://vdb.im

• The Antediluvians are awakening! VTES blog Gaming with Brett S is posting again! Recently new posts are “Quick-Start Guide Update!”, “What we leave behind: A farewell to Serpentis” and “Our powers renewed: A welcome to Protean”. Great to see more original content like this again – VEKN approves, and will share!

• To finish this section: How cool is the below VTES trophy?! Found on Reddit, we really don´t know more. If you made it, or painted it, or adore it - comment everywhere :) 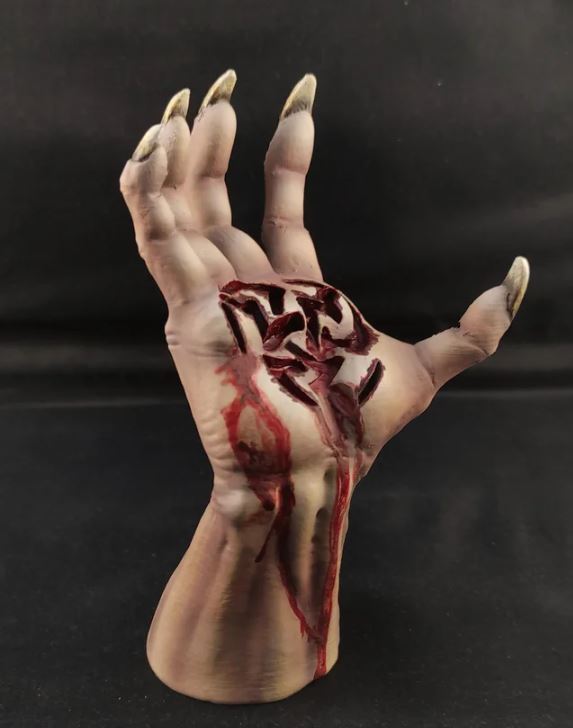 On the 2nd and 3rd of April 2022, Ficzone, the most important international film, comic book and game festival in southern Spain, took place in Granada, with around 30,000 people in attendance from different cities throughout the country.

In the morning, we had no clue of how many people would be interested in learning the game. In fact, we had brought our decks to play some games while waiting for possible Embraces to show up... We were greatly surprised when, shortly after starting our first game, the first interested group of people dropped by, followed by more and more people. By the end of the day, we had already taught 41 people to play VTES!

For these demos we used the First Blood decks, which are ideal in this type of event. We gave one of them to each participant, as well as some of this year's promo cards. We tried to spend no more than 35-40 minutes for each group of participants, getting them started with a general introduction to the game (story, background, etc.) and then playing no more than 2-3 effective turns (with vampires in play) per player, focusing mainly on the phases of the game, vampire stats (fundamentally disciplines), and having played some bleed, politics and combat.

At the end of the day, we raffled a Pact with Nephandi deck, some Nefertiti advanced promos, and a few First Blood decks. 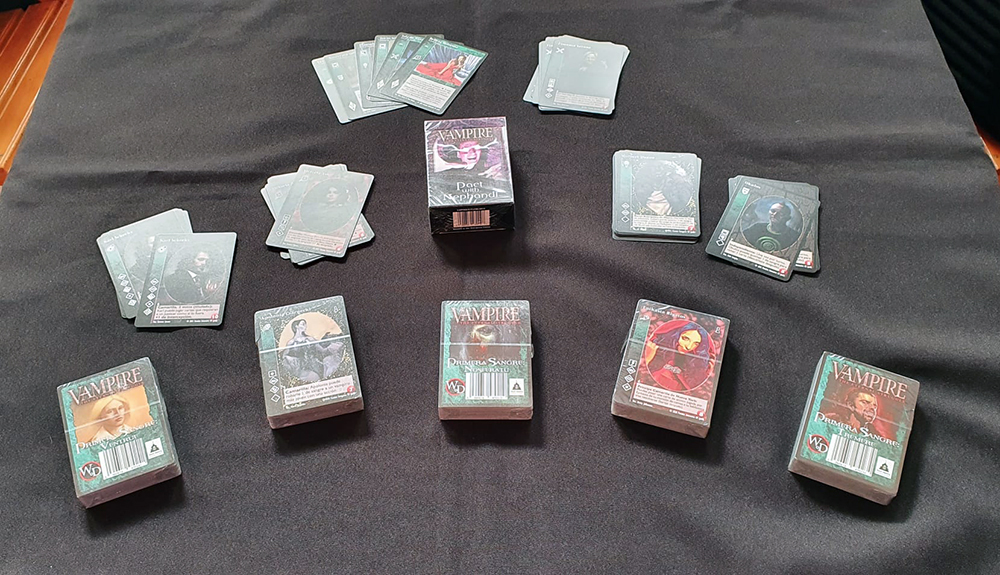 We have to say that VTES was spectacularly well-received, exceeding our expectations by far. The participants were delighted with it, being aware of the complexity of its rules, and super happy at the end of the demo games.

So, although we were half hoarse and exhausted by the end of the event, and we will not know how many of these players will end up playing regularly with each other (time will tell), we left the festival proud and extremely satisfied with the great reception and acceptance of VTES and, of course, for having shared that day with some great people who have made us spend a memorable event that, without a doubt, we would definitely repeat.

Oh, of course we have to thank Ginés, Hugh and Arnau for having provided us with all the promotional material used (cards, decks, etc.). Without you this would not have been possible, thank you very much!

Are you also interested in demoing VTES but need some help? Have a talk with your local game store or gaming event, and with your local Prince or National Coordinator, or with Black Chantry directly!

• The Pander, Salubri and Tzimisce cards are now up on VTES Legacy Singles at Drivethrucards - see the top of this newsletter. Next up are more bloodlines cards.

• The five New Blood introductory decks were officially released on April 17, and so they will be tournament legal on May 17. They are now available in stores all over the world.

• CEO Hugh guested long interview in Vtes México Youtube channel - practically everything anyone ever wondered about anything was answered there. Must-see-TV!

• Fall of London is not ready for print yet, but release is still mid 2022. 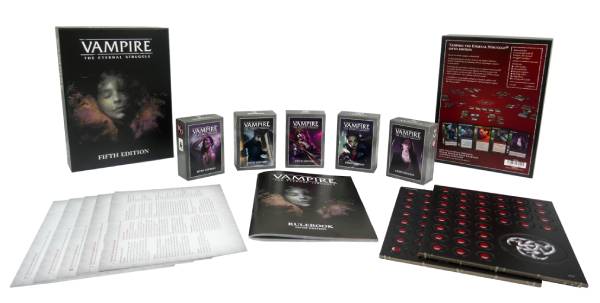 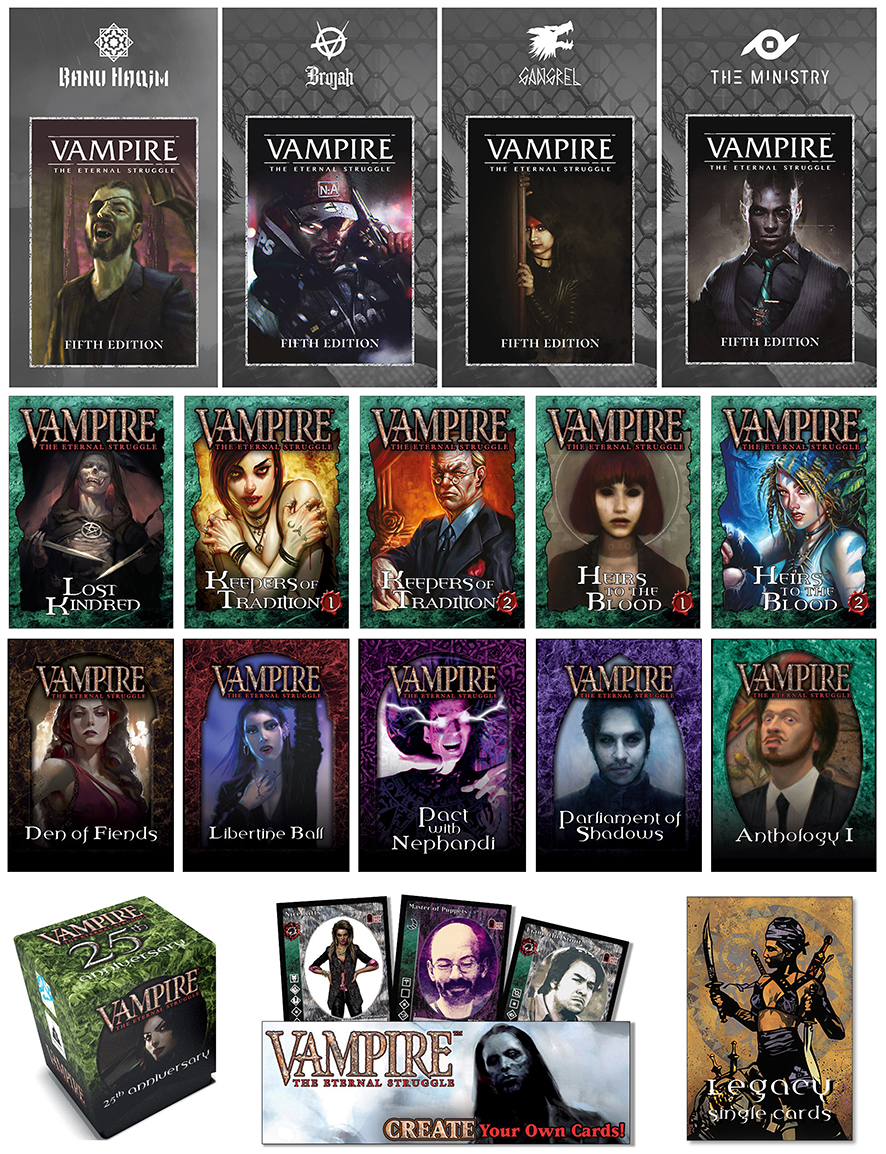 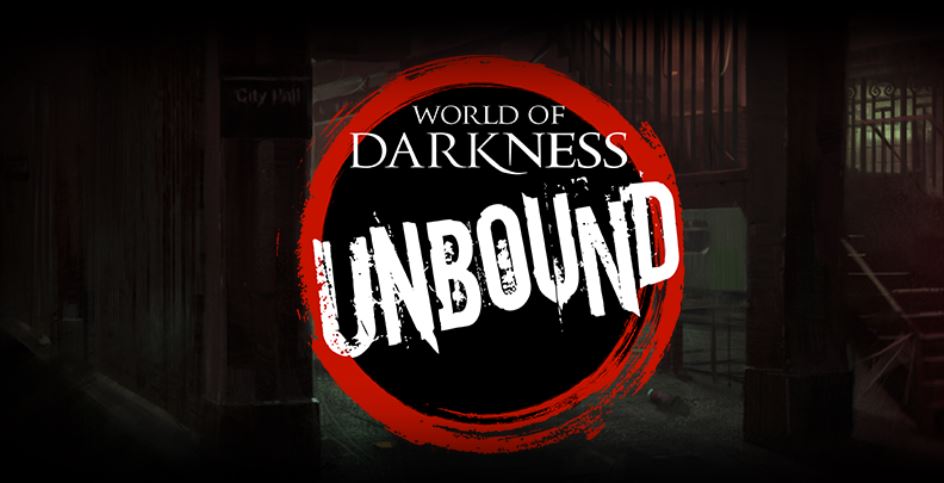 Three highlights from the past month:

• Paradox Interactive are taking the Vampire Jam one step further with World of Darkness Unbound! This allows you to create your own digital game based on the Vampire: The Masquerade IP and even monetize it, as long as you follow a licensing agreement and the rules of itch.io.

• The Second Inquisition sourcebook for Vampire: The Masquerade is now available at Renegade Game Studios.

• Vampire: The Masquerade Bloodhunt from Sharkmob was released in April, so why not go crawl some rooftops in Prague?

Upcoming tournaments for the coming month (booked so far) are in:


No one cares what you do. They care what you can do for them.