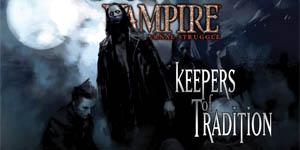 The firm hand rules all.

The Camarilla is the universal organization of vampires that speaks for and legislates every vampire in the world (at least, in theory). Bound by a number of Traditions detailing the creation, behavior and destruction of Kindred, the sect also strives to hide to existence of all vampire activity from mortal eyes. This deception, called the Masquerade, is at the core of the Camarilla's existence; the struggle to universally uphold the Masquerade is what drives much of the sect's policy and direction.

White Wolf's fifteenth expansion for Vampire: The Eternal Struggle is a stand-alone base set entitled Keepers of Tradition, and it revisits the primary sect of the World of Darkness, the Camarilla.

Each booster pack contains 11 cards randomly selected from a set of 398 cards consisting of 100 rares, 100 all-new vampries, 98 uncommons, and 100 commons.

Due to an error, two of cards show up on both the uncommon and rare sheet. Each should have appeared only on the rare sheet (and each bumped an card off of the uncommon sheet). One of the bumped cards was a reprint (Society Hunting Ground). The other was a new card.

The set also features 4 non-random preconstructed decks, Brujah, Malkavian, Toreador and Ventrue, which contain even more cards and are designed to get beginning players started right away. Each preconstructed deck contains six new vampires that aren't found in the boosters.

The printed rulebook found in the starters is the same, except for the cover, as the one found in Lords of the Night starters. The updated rulebook is online at http://www.vekn.net/index.php/rulebook.

Changes to rules and cards

Crypt cards marked with an asterisk are found only in the preconstructed decks.