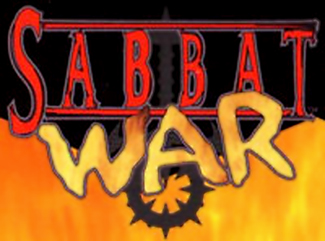 The war between the Camarilla and Sabbat rages across the American East Coast, and battle lines are drawn for the fate of the World of Darkness. Ancient elders pit their servants against one another in gruesome swathes of blood and terror.

Who will be the victor?

Vampire: The Eternal Struggle, the collectible card game inspired by Vampire: The Masquerade and designed by the creator of Magic: The Gathering, has returned. Now, you are an elder vampire, manipulating pawns to destroy your enemies in the age-old Jyhad.

Whether you are a V:TES expert or a new player, you can sink your teeth into Sabbat War. This heavily-revised version of the popular Sabbat set will be released in booster packs and pre-constructed starter decks. There are four different starter decks, each containing a fixed selection of cards. The booster packs contain a random assortment of 11 cards from a pool of 300 cards. The preconstructed starters are built from this mix plus other cards to bring the total number of cards to 437.

If you've been playing with the older sets, find out what's changed.