The final table was seated:

First Juha ousted Katja which was followed by Jyri ousting Antti. After which, the table was locked for a while until Juho was able to bleed and vote Juha out. Because the tournament had the extra rule that an oust added 10 minutes to the game clock, 30 minutes in total was added for all the three ousts. When the main time ran out, Jyri would have won the heads up between him and Juho, because he was the top seed and both him and Juho had a VP. But because 30 minutes of extra time was on the clock, Juho was able to make Jyri to spend enough resources allowing him to get an oust when 16 or so minutes of the extra time was left on the clock. Thus, Juho won the tournament.

So to summarize, based on this tournament the additional time granted from ousts can make a difference in deciding who eventually wins the tournament.

Congrats to Juho for winning the tournament and thank you again to Antti for being the main organizer.
Prince of Tikkurila, known as Teryn in Lackey CCG

Congrats for the winner and nice to see that the time change actually made a difference.
NC, Finland

I was first seat and had what others described as "lightning start" regardless. Five minions and 31 pool on turn 3. This signaled me as the table threat early on, something I am known to do. I don't like playing slow. 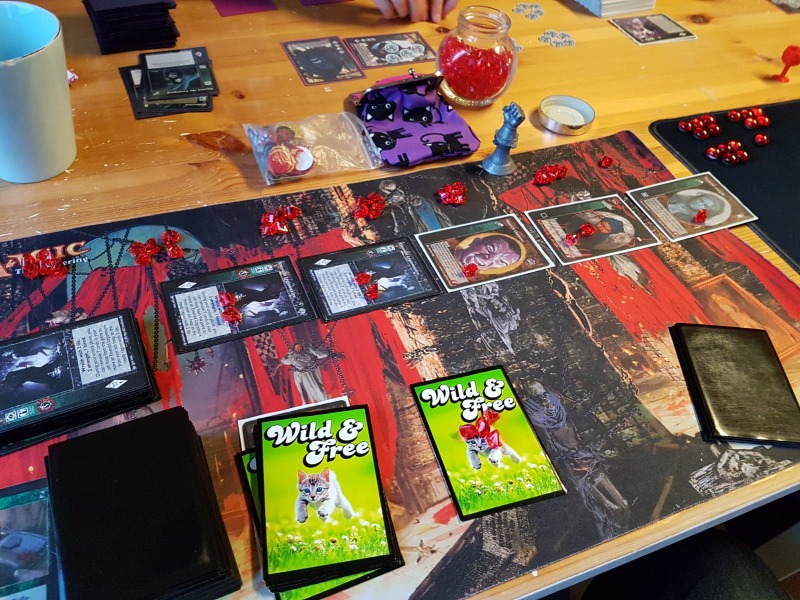 In front of me was Katja playing Lasombra SB who had very little defense against my armada. She was going forward pretty much as fast as she could and subsequently bounced to the bleed sink of the table: Antti. Antti had a rough game and didn't seem to get much going on at any point. If he had drawn any bleed bounces of his own, it might have been different. Since Antti was playing "Sha-Ennu bleeds for a million" deck, I am sure he was conscious of the IC's in front of him who would have bounced his bleeds for sure.

I think everyone knew Katja was doomed, and I got the oust without much contention. After that though, there was a shift in table balance. I had been hoping to snowball Jyri before the table could deal with me, but Carna vacuum-cleaned 3 legionnaires, Juho's Rafael de Corazon did 15 pool damage with two actions (bleed for 6 and anarchist uprising for 9) and then Juho banished Anu; which was pretty much the last nail in my coffin as I no longer had the ousting power to punch through nephandi. I was practically out of the game since I no longer had the pool to bring Anu back. Antti had had no game all game long, and our respective ousts were merely a matter of time.

After Jyri and Juho were in heads-up though, the game turned into a grind (Jyri's words). I was playing in a casual game during the end, but from what I could gather, Jyri's more grindy deck did not have the +bleed cards to finish the game, and Juho had a ton of pool. Juho on the other hand said that the unmasking was making his life hard, despite having two IC's with obfuscate. Eventually Juho accumulated enough advantage to close the game. Lets not forget that the IC deck had had practically no predator all game long.

Even though Jyri had the game pretty much in control when only two players were left, the time rule added so much time to the game that Juho could grind his way back and eventually get the win. Without the extra time rule, time would've been called and Jyri would've won the tournament with the top seed.
A heretic is a man who sees with his own eyes.
—Gotthold Ephraim Lessing

Bloodartist wrote:
I was first seat and had what others described as "lightning start" regardless. Five minions and 31 pool on turn 3. This signaled me as the table threat early on, something I am known to do. I don't like playing slow.


I'm puzzled - with no HoS, how did you get the first Emerald Legion into play?
--
National Coordinator
South Africa

"Oh, to the Hades with the manners! He's a complete bastard, and calling him that insults bastards everywhere!"
-Nalia De-Arnise