How I would relaunch V:TES (card reprint)

Lönkka wrote:
Govern might trump Scouting and Enchant, but with two Freak Drives, say, Arika could use all three of them at superior on the same turn which mean very cheap vampire coming up...


Huh?
You mean for ones that do not have Superior Presence (like Arika, whom I gave as example, does)?

But yeah, Thing would work for, say, Stanislava,


It's a good place to propose removal of all vampires bigger than 9 cap from the new VtES.

elotar wrote:
It's a good place to propose removal of all vampires bigger than 9 cap from the new VtES.

I actually think removing vamps bigger than 8 from the game might be a good idea, because of the current Zillahs+Villein-shenanigans. Maybe replace them with cards like this (Well, maybe not EXACTLY like this, but you get the idea): 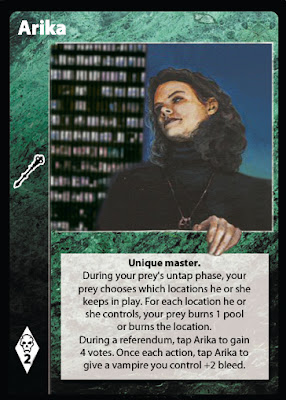 "My strategy? Luck is my strategy, of course."

Ashur wrote:
Maybe replace them with cards like this (Well, maybe not EXACTLY like this, but you get the idea)


I like the way you think outside the box even if I'm not really sure if that would help to alleviate the problem.
NC, Finland

(And no, Lost in Translation doesn't cut it — a lost opportunity to very conservative design. At least one of its 3 big cost/restrictions gotta go: age, 2 blood, only one per action. Now that I have used it more, I agree with ICL's logic and favor removing "one per action." Removing counters from the table speeds up the game, and opening up bounce makes more surprise responses to bleeding interesting. Simple errata solution in my view.)

I also believe more bounce is healthy because it helps deck construction and covers clans that really need something more useful to do with their Reaction time. (Which Reactions is the biggest part of one's play time by default, and interaction is the name of the game...) The big "chuck 5 down the pipe and see where it lands" needs a robust, affordable response — so as to save slots for other blocks, combats, and forward pressure — and bounce is it.

Now first thing, Deflection cannot be king of the hill anymore. Any design here has to at least equal or best basic dom Deflection, or don't bother. It's been over twenty years, enough already, time to take a fair appraisal and stop wasting time. However, achieving parity does not preclude lateral design development; discipline cards usually do come with two levels of play, basic & superior.

At one point I thought Obfuscate and Fortitude were a hot space to cover several clans. But on retrospect Obfuscate is a strong discipline with lots of fun things to do. Fortitude is the Freak Drive discipline, but i can see it getting more fun toys, possibly more bleed reduce. Nowadays I think Celerity and Potence covers a wider range of clans that could really use bounce help while diversifying these way too focused disciplines. There will be some redundancy, but such is the nature of so many clans and discipline overlap.

So my big priorities would be Celerity and Potence bounce first and then Obfuscate and Fortitude bounce/reduce later. Reaction cards is a design space that should be diverse and lush; it's the majority of playtime and player interaction. Pushing bleed defense further into Masters, Actions, and Act Mods is just stressing diversity while ignoring a card pool vacuum that's been in the game too long.

By freeing up defense from "everlasting wall of intercept" and "backrush" you let players interact more without feeling as compelled to lockdown predators/g-preds to stay in the game. That smaller defense module package, "democratized bounce," should help alleviate deck build pressure and open up several more slots for card diversity. It might even help open deck space for specialized meta responses, like poking combo decks in their lynchpin.
Last edit: 17 Aug 2016 01:22 by Azel.

Lönkka wrote:
Govern might trump Scouting and Enchant, but with two Freak Drives, say, Arika could use all three of them at superior on the same turn which mean very cheap vampire coming up...


Reminds me when I had Ugadja influence out Sobayifa. Use Ugadja's special previous round so as to not attract too much attention. Then next round Enchant Kindred down, Dusk Work tap 3 Aye, & Founders of the Ebony Kingdom. Left 3 Aye still up for a wake later. Could've done it all at once, but who wants to attract that much attention...? Besides, save a Dusk Work for later!

Yeah, Ugadja has basic fortitude, but it felt like a moral victory to get a free Sobayifa without it. Yes, it still attracted a pinch of table hate. But why, they're just Guruhi without Nana Buruku?!

Just let me keep passing along my Ghoul Messenger to my vampires in peace.