Trying to build a complete list of variant printings

The current state of what I've been able to confirm is available at www.drnlm.org/~neil/VTES/variants/index.html

Specific cards which I'd appreciate help on:


Jyhad U2/R2 cards:
Jyhad's printing layout was a bit odd, and cards printed on multiple sheets (either U2 or R2)) often differed between the sheets. I haven't been able to identify differences for the following cards, but my sample size is small enough that I can't confidently state that variants don't exist:
Voter Captivation
Al's Army Apparatus
Kindred Intelligence


VtES variants: I've found basically no information about variations in the VtES printing, so any details appreciated (and scans of variants very much appreciated):

The ones I've seen claims for are:

Conquer the Beast - Also printed with the equipment restriction according to the discussion here , but a scan would be much appreciated.

Misdirection - The vtes.pl shows the VtES Misdirection with a cost of 1 pool, but so far I've found no-one who actually has a physical copy like that. Anyone able to confirm the existence of this variant?
--
National Coordinator
South Africa
The following user(s) said Thank You: ModernAngel

Less More
02 May 2021 13:07 - 03 May 2021 15:37 #102199 by ModernAngel
Replied by ModernAngel on topic Trying to build a complete list of variant printings
Hello, sorry to resurrect this ancient thread, I didn't discover it until now. Your list is missing a variation of Waste Management Operation from Sabbat War, there are three different ones that I know of: 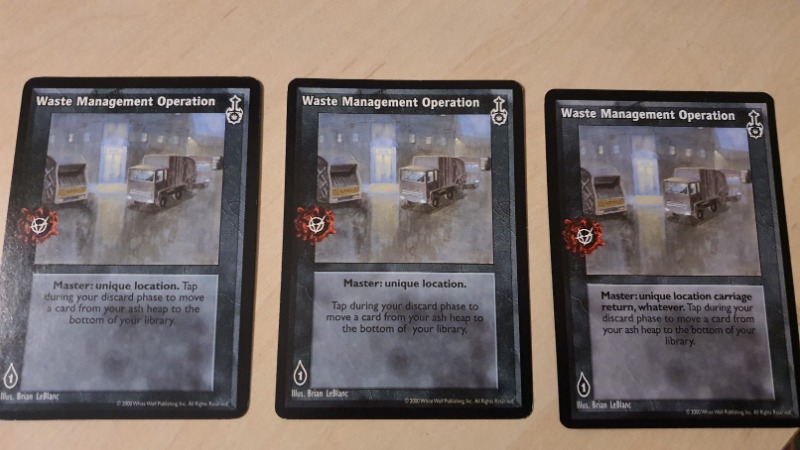 Less More
03 May 2021 13:51 #102206 by Ashur
Replied by Ashur on topic Trying to build a complete list of variant printings
I would never play anything but the "carriage return, whatever" version

"My strategy? Luck is my strategy, of course."
The following user(s) said Thank You: hardyrange, Hakuron