Just as Magic that has several formats like Modern, Legacy and Commander, I don't see why VTES has to get stuck in Constructed (and limited which is little used) format. I am sure of the frustration of the vast majority of players when they have only 2 or 3 players or when they get out quickly from a table and have to wait about 1 hour to start another. Besides it of a usual delay of a normal match where you have from 1 to 3 hours of game. With that in mind I would like to propose a new game format called Duels.

How Duels format look like?
Duels would follow exactly the same rules as the normal Constructed tournament format (which we might call Ancient or something to differentiate), with a few changes:
- Matches limited to 2 players only;
- Time limit of 40 minutes;
- Library size between 50 and 60 cards and crypt with a minimum of 8 cards;
* Optional: Once tested we could perhaps add 1 recursion per game, recursion would shuffle your ash heap if your library or crypt runs out;
- Adding extra Duels text on cards that require more than one player using the same design used on Draft cards where a different effect is added to the card.

I created some examples of cards with Duels texts: 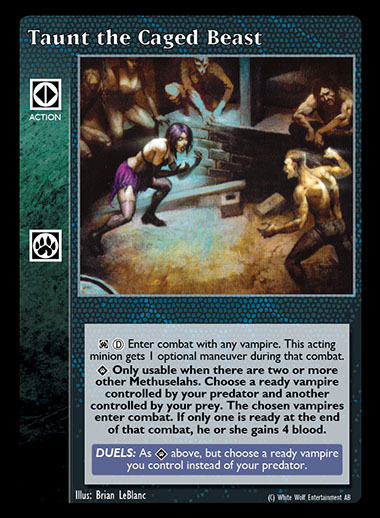 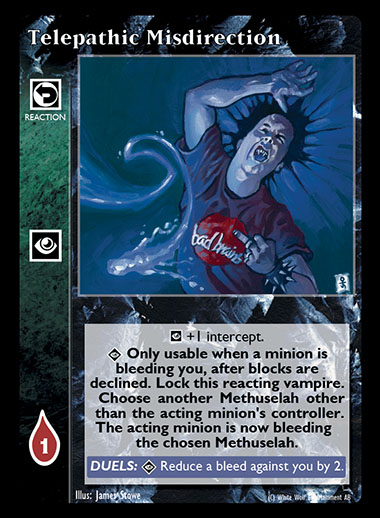 And how would it look normal Ancient / Constructed format? Just as it already exists. But it would be interesting to be able to use the extra text from Duels cards when there are only 2 players left at a standard table. This would make the game more agile, as it is common at the end of a game you get your hand with toons of useless cards like Deflection, Redirection or Reckless Agitation. 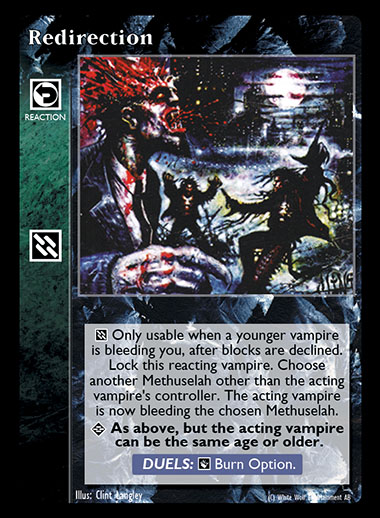 Just as Magic has several formats like Modern, Legacy and Commander, I don't see why VTES has to get stuck in Constructed (and limited which is little used) format.


I'm a strong proponent of 2-player games in VTES. That's actually all I play. I've gone as far as creating some house rules and alternate card texts to make several cards work better in a 2-player environment (in my version, cards that redirect bleeds reduce the bleed to 1, cannot be reduced further, and cost 1 blood). I also have 10 "duel deck" sets that I use when I play. I've found that a constructed format, where players build decks, is terrible in 2 player; it's better to just have 2 prebuilt decks that will interact well and go from there. If the decks are built correctly, the games tend to be very close, which believe it or not is actually very fun.

Tadori wrote:
I think that it's not a problem of lack of alternative card teksts. You can still play a deck without some cards specially made for 1v1. In my opinion the problem is that VTES is made with multiplayer in mind and if you strip it from this aspect games becomes shallow.


You are 100% correct. The version of 2-player VTES I play is very "shallow," by which I mean it is super simplified, owing mostly to there being only 2 players. There's very little in the way of surprises or politicking. Referendums in particular are very straightforward; just count up the votes and that's it. Even the cards used for both decks are known to both players, so there's no guessing what archetype is being used by one's opponent. It's very different from regular VTES. The thing is, VTES is such a complex game to begin with, that there is enough to keep things interesting. It's like VTES lite; still very good, but different. Those I've played with seem to enjoy it. I've found the shallowness to be more of an asset than a hindrance.

Less More
31 Jul 2019 14:37 #96050 by Mewcat
Replied by Mewcat on topic New game format Duels (head 2 head)
Conceptually I'm in favor of formats or anything that brings some freshness to the game. Novel experience is a goal of mine.