jblacey wrote:
I am not rare chasing. This deck needs more than 1 Smiling Jack and it is suffering from a smaller than it should be deck size.


The best Tzimisce deck for new players before now was 3rd edition. This crypt will suck less.

But it totally could have done more with 2 Jack, dropping another master and dropping 2 other cards for abbots.

I would have liked seeing 2 jack, 3 abbot, 2 war ghoul, 2 Jake, and maybe corpse balloons, making the reaction package become on Q, eyes of Argus, and bounce, relying on bowl, abbot, under siege to block and using spot intercept otherwise. That would have let this deck become more a combat toolbox, giving 4 different options to a new player buying 2 copies of this deck: war ghouls, toolbox, combat, wall.
Its playable.
We are too jaded with Anthology to remember Eyes of Argus and Deep Song are staple cards that aren't cheap enough for a new player to justify buying as singles. If a new player buys anthology, they get 4 deep song 4 eyes of argus, but not a deck. If they buy this, they can play and have birds and jack and bounce enough to start looking at other things.

This is the deck I'm most curious about the new vamps in. And theres no such thing as too many Jack or eyes of argus.

It's the least cheesy playable deck of the bunch. (I mean, we dont know what 2 Lasombra crypt cards are still, but they aren't preventing ranged ag.....)

nisu_advanced wrote:
I mean, I’m sure that the inclusion of an Enkil Cog, 3 mind rapes and 3 parity shift would have resulted in better opinions and longer cues to catch this deck, but, won’t it benefit more from these Enhanced Senses?


I kinda doubt that the inclusion of Parity Shifts in _Sabbat_ decks would've really resulted in better options (?) for any of those decks...

But (naturally) granted, when they do make Camarilla themed decks, the inclusion of it is a must!
NC, Finland

Less More
12 Jan 2019 12:19 - 12 Jan 2019 12:31 #92790 by Bloodartist
Replied by Bloodartist on topic Den of Fiends starter deck revealed
Aight, I'm going to write my own totally biased opinion about this deck. I was trying not to do it because I don't wanna blast the precons too much. We all want as many beginners to buy these decks as possible. This deck is in my opinion the weakest precon out of the 4.

The deck runs fame. While fame is one of the better if not the best wincon for combat decks, the decks only method of getting into combat with your prey's famed creature are 4 easily blocked, no stealth deep songs. The decks only stealth are the 4 changelings that were listed among wincons because they in theory add +4 total bleed (whoop-de-doo).

There is only 1 fame. Since fame goes away if you actually oust your prey, there should be at least 2 fames in the deck so you can use it on other players in an attempt to get a table win.

The deck has an inexplicable lack of eagle's sight, which would allow you to block your prey's bleeds and thus offer a more reliable way of getting into combat with the famed creature. I'm still not quite sure why eagles sights were misplaced and are found in the nephandus deck instead...
verdict: his deck does a good job of wasting fame's ousting potential.

1 living manse. Its good, but a singleton is questionable. There should be 2-3 to have a more reliable +bleed over the course of the game.

Smiling jack, dragonbound. Oh boy don't get me started on these. Those who know me know that I hate these cards with a passion due to how much they suck. Both are very likely to oust the wrong people, including yourself. Other players are likely to benefit from them just as much, if not more. Dragonbound particularly is prone to self-ousting. It is once in a blue moon a strong ousting card, IF you happen to draw it at exactly the right moment. If you don't it will take away your handsize until the end of time, regardless whether you play it or keep in your hand. And handsize is super important for a combat wall. You want as many reactions and combat cards in your hand as possible. Freely giving away handsize is stupid. This deck also doesn't have strong enough combat to actually rely on dragonbound. My recommendation on correct use of dragonbound is to always discard it from your hand, never play it.

Deep songs: well, since they are the ONLY way for this deck to get in touch with the famed vampire, these are not going to be used for bleeding, are they?

Seriously, whats the big idea... Horrid form is a cool card...if you actually got presses or trap. This deck doesn't. Well, it has 3 telepathic tracking which gives second round for 1 blood and is actually intended to counter strike:combat ends.. Without presses you are basically paying 1 blood to avoid 1 damage. Not the greatest efficiency. The idea of using inner essence to pay for horrid form makes me think of the 20 pool game demo decks. Instead, the deck should have the universal taste of vitaes, although I guess inner essence DOES work better in an ally-heavy environment.. As you cannot taste from allies (complete flavor fail btw)

Why didn't you simply include path of metamorphosis that would be only 1 card that you can protect with your wall stuff and that would make ALL horrid forms and dragon breaths cost 0, without the requirement of having the card in your hand at the exact right moment? Oh, did I mention earlier this deck screws up its own hand by playing dragonbound?

These cards could've been target vitals that would do more damage while paying less for greater effect. Or the deck could've used the decent trap+horrid form combat module which is nice. Or the stellar (but not tzimisce specific) aid from bats+carrion crows combat.

Other than the out-of-place horrid forms and inner essences, the combat is sort of ok. Aid from bats combat module would suit this deck as well, by being safer (one card has both strike and maneuver, so you can avoid melee). I still get the feeling the designer was intentionally trying to avoid making the deck TOO good....

C.) Intercept and wakes
This is the one area where the deck doesn't fall short. It has 12 wakes/unlocks which is good, and has decent amount of intercept.
EXCEPT: the inexplicable lack of eagle's sight.

Also only a singleton under siege. Tzimisce benefit from under siege the best since they have several combat-worthy bishops that can play the card. Ludmijla Rakodzy, Lady Zara Slatikov (from the older precon), Yuri Kerezensky - which can all be in the same crypt.
There should've been 2 or maybe even 3 under sieges in my opinion. Its a great card for a wall deck, even if it is unique. Admittedly you can get it from anthologies once that arrives to the stores again.

D.) Crypt
We don't know what the new vampires are like, so I reserve judgment on this. Personally I think that lady Zara Slatikov from the earlier tzimisce precon is a perfect inclusion for this kind of deck, but if these new vampires are equally good, I got no complaints. If one of the new vamps has a rush as an ability it would improve my opinion on this deck greatly.

Final verdict: reserved until we see the new vampires.
So far I think the deck does a REALLY poor job in terms of its win conditions. The combat module is suspect - it can't really even beat a single nephandus unless it draws carrion crows and the inexplicable lack of eagles sight cannot be explained.
A heretic is a man who sees with his own eyes.
—Gotthold Ephraim Lessing

Less More
12 Jan 2019 15:05 #92800 by Mewcat
Replied by Mewcat on topic Den of Fiends starter deck revealed
its still not as bad as big lasombra voters that automatically lose to one of the most common things to see, inner circle.

Less More
12 Jan 2019 17:55 #92802 by Bloodartist
Replied by Bloodartist on topic Den of Fiends starter deck revealed
The old lasombra voters got presence so its not as bad. Also wait til they villein and play this 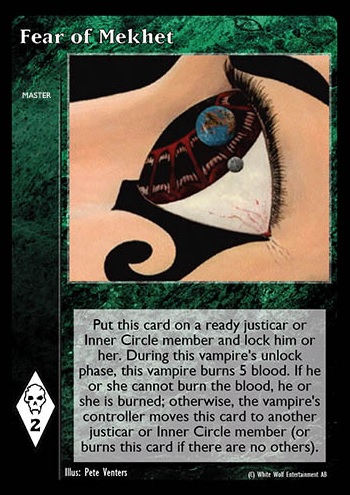 A heretic is a man who sees with his own eyes.
—Gotthold Ephraim Lessing

Bloodartist wrote:
Aight, I'm going to write my own totally biased opinion about this deck.


I agree, it is bias (mine is as well, having played Tzimisce as my primary clan for 20 years). I think you may be extra harsh. I am about 50/50 with some of your comments.


This deck is in my opinion the weakest precon out of the 4.


You hit on what I consider the greatest the mistake people do when playing Tzimisce. They don't invest in their win condition.


I agree that Fame or Dragonbound aren't reliable. Smiling Jack on the other hand always hits your prey first and forces players to get into the Tzimisce attrition game. Fame requires a consistent mechanism to enter combat, which 4 Deep Song is not nearly enough. Dragonbound can be good is a rush down style with +hand size (I use it with Nana), but this deck is not even close to fast enough.


The deck has an inexplicable lack of eagle's sight


Mix thoughts on this comment. On one hand if this deck plans on being a wall (which you should be if running Jack), then eagle sight is required. If this is supposed to be rush down, then you don't need eagle sight or Jack.


It is decent, but there are better options. How many actions do you think Tzimisce normal take?


My general ratio is you want 1 Trap per 3 Horrid Form. In my signature deck, I run 18-20 Horrid Form , ~6 Trap, ~6 Telpathic Tracking. Just depending on if I want vampires to take dirt nap or burn. That said, I also use Ashur Tablets (pool gain + recycle is just too good to pass up). It is very combat card efficient.

You know what I never use? Inner Essence.

That said, in a starter deck... I would rather see C. Marauder + Dragon's Breath + Target Vitals. That would be way more flexible and play into the Deep Song.


Intercept and wakes
This is the one area where the deck doesn't fall short.


I don't agree, but it would take more time than I want spend right now to explain. The point is there are critical cards missing.


Also only a singleton under siege.

That is one of the issues. IMHO, Abbot + Under Siege + Eternal Viligance is necessary and I play them in non wall decks. It is very card & action efficient.
Last edit: 12 Jan 2019 18:24 by jblacey.