What exactly means "use" in the different contexts?

It has been ruled, that a "use" of equipment contitutes the "use" of any optional effects that equipment provides, and is not a "requirement" to play.

Meaning any minion that fulfills any requirements, can play such an equipment, even if they can not use it.

Most notable example for that is probably "Seal of Veddartha", wich has been ruled in [LSJ 20030607] and confirmed in [ANK 20180801] to be playable by any minion, and the disciplines are even given to a vampire that can not "use" it and "use" only constitutes the "usage" of the provided action.

I have now several questions:

1)
Stolen Police Cruiser is "only usable by an anarch" and provides an action so " Any vampire can burn this card as a Ⓓ action that costs 1 pool."
According to the above ruling, this would be a usage of the Equipment. This would be in line with the NRA rules of VTES (Any action provided by a card can only be attempted ocen per turn) But that would mean it can only be taken by an anarch, by the card text of the police cruiser, wich seems agaisnt the intent of the action.

2)
All true Brujah have the text "She/He cannot use cards requiring Celerity". This has never been changed and appears also in recent printings of currenct products.
What is a use in this context? The Rulebook states:
"A Discipline symbol within a diamond signifies that the vampire has the superior level, and therefore may opt to use either the basic (plain text) or the superior (bold) effect listed on the card (but not both)."
This seems to imply that playing a card is not "using" the card, but actualyl resolving the effect is a "use" of the card.
Can True Brujah play Celerity cards, but their effect is not resolved, because they can not "use" it, or is the playing illegal alltogether, because it would generate an "unusable" effect?

3)
"Shadowed Eyes" prohibits the "use" of ranged strikes. Basically the same question as above: Is the play of a card providing a ranged strike prohibited, or would the ranged strike fizzle? can a minion under the effect of "shadowed eyes" play "aid from bats", since it also provides a maneuver, or would it be illegal, because it locks in an unsable strike? 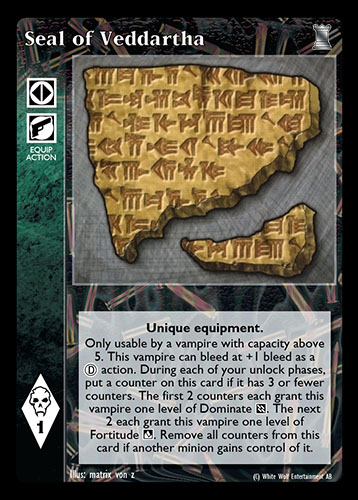 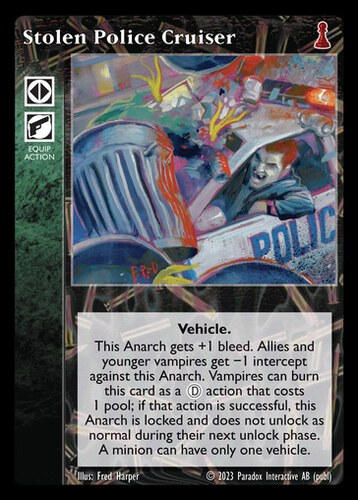 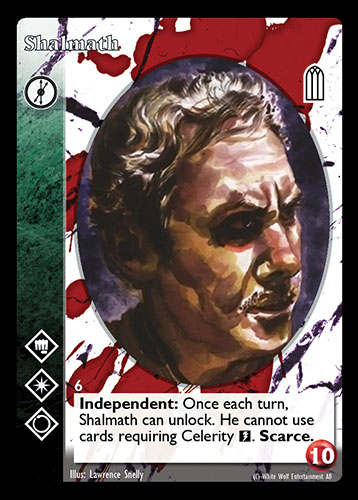 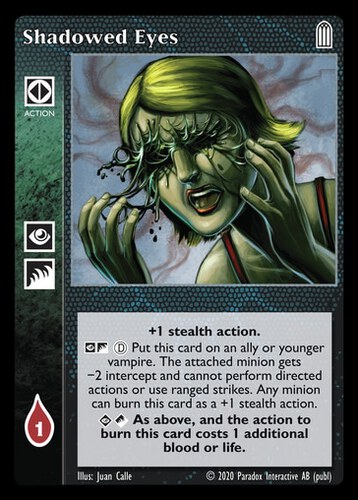 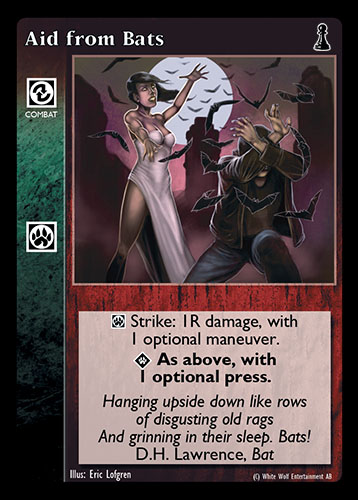 2.1) Can an anarch True Brujah play Line Brawl for the

Steal 1 pool from another Methuselah.

Enter combat with a minion.

Found the answer to this question after some digging;
Yes, a True Brujah can play multi-discipline cards that have a

effect as long as it is not the effect played i.e. Line Brawl played at

Bleed with +1 bleed is a legal play.