Beginning this November, Vampire: The Eternal Struggle (V:TES) players around the globe will participate in the latest V:TES storyline event. V:TES storyline tournaments are player favorites and attract veterans and new playe 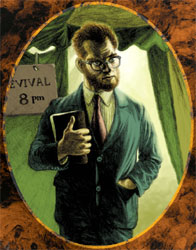 rs alike. Players are required to build and play decks with crypts composed mainly of a single clan of vampires. Results from events around the world are then tallied and the clan that wins the most events is typically rewarded with a card in a future V:TES expansion.

Compared to previous storyline events, the Millennium Cultist events will allow greater participation for each of the tournament's players. Storyline Director, Robert Goudie said, "In the past, much of the fun of storyline events was experienced only by the finalists. This time we wanted to extend the experience to all players."
As with last year's successful Infernal Plague storyline event a custom deck, legal only for this storyline tournament, will be provided to players. However, this time a special deck will be used at each table throughout the event. "Putting a custom storyline deck in each 5-player support kit seemed like a great way to let everybody share in the experience," said Goudie.

The story revolves around the unauthorized Embrace of a small-town Kentucky pastor, Reverend Daniel Adams. After his rebirth as a vampire, Reverend Adams tries to reconcile his religious beliefs and the hideous acts he performs under the control of the Beast. His professional life also takes a turn. The further Reverend Adams' sanity slips, the more popular he becomes. His charismatic sermons and end of the world prophecies result in a compound full of followers and a growing armed militia, none of which has escaped the notice of the Camarilla and Sabbat.

The special storyline format will revolve around a Daniel Adams, Millennium Cultist crypt card that will begin play in the center of the table. Players will take actions to take control of Reverend Adams. While controlling Reverend Adams, players may use cards from the special Millennium Cultist deck. The deck contains cards that represent the strength of the cult's financial resources and the militia's growing weapons cache.

In addition to the custom storyline legal decks, the support kit also contains 5 copies of a legal-for-play version of Revered Adams.

The following is the Prologue for the Cultist Storyline Event

Among the many small churches of Clay, Kentucky is also found the fastest growing church in the Eastern U.S. Over the course of just a few months, the Millennium Church of the Coming Kingdom has grown from a small, mostly elderly, congregation to a community bursting at its seams.

Led by its young, enigmatic pastor, Rev. Daniel Adams, the Millennium Church has outgrown the 100 year old church building in which it formerly resided. In response to the growth, the congregation has temporarily moved outdoors and acres of land are now peppered with tents used for church activities and for housing many of the church's members.

It is this recent move to a communal living style that has some outsiders worried. One woman, who asked that we not identify her by name, said that the Reverend's followers were selling all of their possessions and giving the proceeds to the church. She continued, "The church created an armed militia to get ready for the end of the world." Many local residents have also blamed the church for a recent spate of livestock killings. Local police said that the animals were killed in an "unusual manner", but refused to elaborate. Officials were quick to say that they have not established any connection between the killings and the Millennium Church.

The most startling aspect of the church's growth is the speed with which it has come about. By all accounts, Rev. Adams was, at best, a mediocre preacher and a man nearly devoid of charm. His installation at the Millennium Church was his first stop after ordination and his struggling ministry consisted mainly of ministering to Clay's elderly and sick. Yet Rev. Adams is certainly at the root of this tremendous growth and his personal transformation is mirrored in his congregation.

In June of 2006, Rev. Adams attended a denominational conference in New York City. After attending a show, Rev. Adams fell prey to a mugger and was badly injured. When he didn't return from New York on-time, many of the congregants assumed he'd chosen not to continue as their pastor. Church members noted that a previous pastor had abandoned them in a similar fashion and this contributed to their outlook. Reverend Adams did return, however, and the changes were apparent almost immediately.

"Rev. Adams' disappearance a few months ago was a frightening time for all of us," said Michael Dean, one of the church's eldest deacons. "I was headin' home in my pickup from a friend's place in Fredonia when I saw the Reverend walkin' on the side of the highway. I picked him up and brought him home. He said he'd been mugged; maybe even poisoned. He sure didn't look good."

The first signs of Rev. Adams' transformation occurred during his convalescence. "It took him quite a while before he felt up to going back to preachin' at the church, but some of us elders would go to his house in the evenin' and he'd teach us," said Deacon Michael.

It was at these impromptu services where the deacons first noticed the renewed spirit of Rev. Adams. It was also during these first nights that they reportedly witnessed Rev. Adams perform miracles and heard him speak his prophetic visions of the end of the world. Since that time, many of the church's members claim to have personally witnessed Rev. Adams work miracles.

In recent weeks the church has begun to build walls around their compound. "We're in the last days, and Rev. Adams says we're gonna be ready," said Deacon Michael.

However, the church's next battles are more likely to be legal, than spiritual. Some Clay residents have promised a lawsuit to try and stop the church's expansion. The Millennium Church had no comments on the threatened lawsuit.

Horatio Ballard tired as he neared the end of his nightly web search for pertinent news stories. He knew that this was one of those menial tasks that he probably should have delegated to some underling, but Horatio found comfort in the routine. In earlier nights, Horatio would have newspapers snatched from the printing presses across the Midwest and would have them hand-delivered to him. Back then, there was not enough time to review the papers and react before they were distributed. The internet, however, changed all of this.

Local news from Kentucky was rarely relevant and Horatio only followed the link by accident. He had already closed the browser window when his mind recalled a few words that he'd just seen on the screen. Horatio re-opened his web browser and retrieved the news article. He re-read the section about the dead animals and knew something was awry.

Horatio would need to find out more, certainly, but he felt that he'd stumbled upon a situation with the makings of a major Masquerade breech. He was also aware of the value of a nice cache of arms--something a growing militia was sure to have.

Jacob Votaux reached Clay in August and had already begun to carry out his orders--get close to Reverend Adams. He carefully catalogued every detail about the militia; the weapons storehouses, when additional arms shipments would arrive, and who was delivering them. Jacob also perfectly recorded every utterance Rev. Adams made when he'd preach. After a time, Jacob's superiors stopped asking him about weapons and told to focus on the prophecies. Each time Jacob reported-in to his Sabbat superiors, he could sense that the information he provided was important and useful--and frightening.