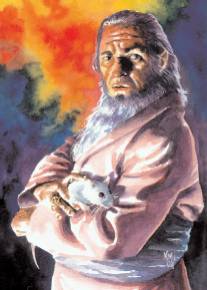 Barbaro hadn't officially been welcome at the Vatican for centuries but made it a point to be owed favors by no fewer than two stewards of the church's archives at any given time. His scandalous behavior and subsequent excommunication from the church were ancient events, and it was unlikely that anyone there today would recognize the name Barbaro Lucchese.

A young priest named Anthony gave Barbaro full access to the archives whenever Barbaro visited. Barbaro was a knowledgeable historian and scholar, and he taught Anthony many things in exchange for his hospitality and unfettered access to the church's ancient texts. Tonight, however, Barbaro neglected the lesson and quickly sought the solitude of the dusty ledgers and worn leather volumes.

Barbaro pecked at the keyboard with his index fingers, duplicating and simultaneously translating the venerable manuscripts. He tore the printed sheet off the printer and penned several diagrams on the page before locking up and leaving the sleeping Anthony a pint low but otherwise intact.

Archbishop of Rome was certainly not a respected position, and Sela's claim on that title amounted to little more than squatter's rights. Rome was essentially abandoned, as it had long been inhospitable to Kindred due chiefly to the activities of the Society of Leopold. In addition, any kind of a successful operation in Rome would require a subtlety that most Sabbat were unable or unwilling to pursue. Sela, however, saw Rome as a shortcut to power and worked feverishly to make the best of the situation.

Sela's first taste of fortune came when she enlisted the help of Barbaro Lucchese, a Tremere antitribu and former priest who knew much about Rome's inner workings. In less than a decade, Sela created an infrastructure that would allow the Sabbat to thrive in relative safety within the Society's backyard. With the aid of sewer-dwelling Nosferatu antitribu, Sela created a niche for herself as an information broker, her Rome listening posts helping Kindred around the world stay beyond the Society of Leopold's lengthening reach.

"Let us not sit idle then. The Society of Leopold's noose tightens with each passing night," replied Sela.

Barbaro sensed rightly that there was no longer any need for pretense and freed a leer that had been fermenting since the day he first met the power-hungry Sela. He offered Sela his arm, saying, "Walk with me this night my Lady, and you will receive power from the god of both this world and the world below."

Alan Sovereign produced yet another stack of bank statements for Quentin King, saying, "Lorance had knowledge of these accounts as well and withdrew all of the funds with wire transfers to numbered accounts overseas."

"Have you stopped the bleeding?" asked Quentin.

"Yes, I believe so. All of the remaining accounts were closed and the balances redistributed," Sovereign responded.

"Are we sure that Lorance is the culprit?"

Sovereign explained, "Lorance's main haven was torched two nights ago. He probably did it himself to cover his tracks, but the fire department extinguished the flames fairly quickly. Based on some of the notes we found there, it seems Lorance is part of a cabal of infernalists that has spent centuries infiltrating the Camarilla and the Sabbat."

"Have the primogen account for every one of their clan in the city," ordered Quentin.

"I will do so immediately." Sovereign added, "I've also arranged that meeting for you with Prince Vargoss in St. Louis. He has been victimized by the demons more than most -- his sheriff and two of the city's primogen were found to be in with the infernalists."

Quentin looked away and muttered, "How deep is this wound?"

Between October 15 and November 30, 2004, results of special Vampire: The Eternal Struggle tournaments from around the world will create the next chapter of this story.

Except as noted in these instructions, the tournament will follow the Standard Constructed Tournament format and current V:EKN rules.

* Recalled to the Founder is banned (due to the clan-focus rule above).

After players select their decks and before play begins, the event organizer will attempt to split the players into two factions, infernalists and non-infernalists. It is the event organizer's goal to have one-half (rounded down) of the tournament participants voluntarily choose to play for the infernalists. Players who are playing Baali clan decks must choose to play for the infernalist faction. Every vampire in the crypts of the players who join with the infernalists (including all vampires in the crypts of the Baali players) gains the infernal attribute (see section 4 of the rules). If the vampire's card text already identifies him as infernal, the infernal pool penalty is increased by one pool (the controller must burn 2 pool or tap that vampire).

John's event has 17 players, so it is his goal to bribe 8 players (one-half of the field, rounded down) to join the ranks of the infernalists. One player is playing a Baali clan deck and is automatically counted among the infernalists. John now needs 7 volunteers to choose infernalism. Two players volunteer to play for the infernalists without any further inducements, leaving John the task of finding 5 additional players who are willing to "sell their souls."

John begins the auction by offering 2 additional pool to each player who joins the ranks of the infernalists. He gets no volunteers at this level. John sees that he has a tough crowd on his hands and raises the offer to 8 pool. John gets one more volunteer. 4 more to go! John tries 10, 12 and then 14 pool, at which time 5 players raise their hands to volunteer. Since John only needs 4 additional volunteers and he has 5, John has each player roll a die to randomly determine which 4 of the 5 volunteers will get to play for the infernalists.

Now, John has his 8 volunteers. Each of the infernal-faction players will now receive an extra 14 pool at the beginning of each round (the amount is determined by the bid amount of the last player who accepted the infernalism offer).

For the purposes of our tally of the winning clans, players who play for the infernalists will be considered separate clans. For example, a player who wins an event with a Ventrue clan deck will achieve a win for the Ventrue. If, however, that player played for the infernalists, "Ventrue (Infernal)" will be given credit for the win.

The winning clan for each faction will each receive a special reward in the next available expansion.

Finding an event near you

Check out the event calendar to search for Infernal Plague events near you. Many tournaments will not be listed on the calendar until early October, so be sure to check back often.

Also, feel free to contact the V:EKN Prince or tournament organizer in your area to help him or her organize your local event.