Infernal Plague: The Return of Nergal 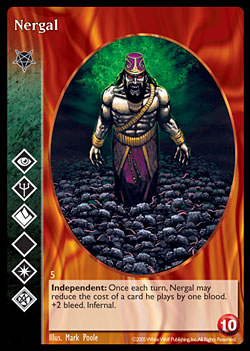 Alan Sovereign's desk burst through the oak door as if it were launched from a cannon. A startled Stephen sprang to his feet and escaped down the stairwell even before the door's splinters sprayed onto the floor. Stephen was young but he knew to put some distance between himself and Alan's fury. Inside the office, Alan paced while trying to grasp what he could have done differently to turn the tide in his favor.

While Alan had predicted the Camarilla would find it difficult to cooperate in the midst of the present atmosphere of distrust, he was still stunned by their shortsightedness in the face of such a dire threat. Alan's calls for assistance were not entirely ignored, but the commitments were little more than token. Alan knew the war was lost as soon as he had scanned the list of names of those who had been sent to help eradicate the infernal plague. Sure, there was the occasional competent Lick thrown in with the rabble, but it was clearly not enough to succeed.

Moreover, each prince seemed to have perfectly measured the minimum amount of support that could be offered without looking as though they were being intentionally unhelpful. He couldn't help but envy their skill in this regard. In the end, most princes were determined to stay out of the conflict as long as it didn't immediately affect them. Of course, Alan knew that no domain would be isolated enough to avoid the aftermath of the Infernalists' new reign.

Alan gathered his papers from the floor and placed them in a briefcase. His plane and Hardestadt the Elder were waiting. As he exited, Alan resisted the temptation to savor a final look at his office. Alan hoped that Hardestadt would be merciful.

Barbaro wandered the empty vault in the Vatican archives. The ancient volumes he had grown so accustomed to were no longer here. The sacrifice of his cherished retreat was a steep cost toward his efforts to release Nergal, but Barbaro had no regrets. His plundered soul was too empty to feel any remorse for a room full of dusty old books or a few mortal vessels.

Helena's angry rants had been grating on his ears for days and as he walked he heard her complaints echoing from the other room. Barbaro did his best to tune her out and silently navigated the perimeter of the room. As he walked, Barbaro brushed his withered hand along the empty bookshelves and felt the aged wood for imperfections.

Helena fumed over Nergal's refusal to help her destroy Menele, but Barbaro's unshakable calm made her even more furious. She had happily relinquished her soul to her demonic master in exchange for a fatal blow to Menele. Now, however, the equation was upside-down and she'd received little for her eternal sacrifice.

Despite Helena's protestations of a betrayal by Nergal, Barbaro insisted that she'd received all she was promised. Not that Barbaro was above reneging on an agreement, it just happened to be that fulfilling this one fit well into his Master's plans. Though Nergal didn't seek out and destroy Menele himself, his heightened perception was enough to help locate Menele's haven. That vital information and Helena's newfound power should be sufficient for her to plan her own assault on Menele. Considering that their third co-conspirator, Sela, was used as a teacher and then discarded, Barbaro was surprised Helena thought she would receive more for her participation.

As Helena paced and continued her rant, Barbaro's hand brushed a knot in the bookshelf's cedar frame. Glancing back to be certain Helena was out of sight, Barbaro opened a hidden panel in the wall and quietly stepped through the small opening and into an anteroom. With the Infernalists' reign now firmly established, Barbaro had plans to implement. His Master allowed no time for rest.

Barbaro quietly closed the panel and slipped away.

The results of the Infernal Plague: The Return of Nergal storyline are tallied. The Camarilla could not overcome the chaos caused by the demonic infiltrators and failed to stop Nergal's return or his formation of a powerbase in the Middle East.

Return of Nergal tournaments around the world pitted four tournament finalists against a single player with a special storyline-only Nergal, Prince of Hell deck. The Nergal deck won a whopping one-third of all events that took place (36 wins). Its closest competitors were the Followers of Set and the Tremere which hauled in 10 and 9 wins, respectively.

Continuing with their recent history of treachery, the Toreador were the clan most surrendered by finalists to play the Nergal deck. Look for a card in a future expansion to represent the Infernalists' victory.