Greed and distrust drive the in-fighting and factionalizing that threaten to destroy the Sabbat's fragile hold on Baltimore. The Camarilla and other clans watch with great interest, waiting for a weak moment and a grand opportunity. The internal and external pressures are mounting and the arrival in the New World of the mysterious Kindred Semsith signals an inevitable tugging on the strings of power.

Read more about the events leading up to the struggle for Baltimore in the prelude. 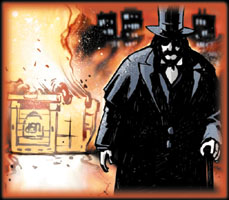 It took nearly twenty days for the great fires to be reduced to thin passionless wisps of smoke hovering over warm ash. Not surprisingly, the city shrugged-off the loss of the abandoned buildings, eager to believe their only purpose was to shelter the drug-addicted and the insane. The arson investigator's examination failed to note the bright white flames and the fire's violent reaction to the dousing it received. The uninspired inquiry raised no eyebrows and the matter was quickly forgotten by the few who even noticed the perfunctory motions being carried out.

The Ravnos who betrayed the location of Isaac Goldwin's haven naively believed the fire would not be set until after he left. His ashes now mingle with burnt timbers and blackened red brick.

Under the chaos of smoke and flame, and the panic it instilled in the Cainite population, hard facts were slow in coming. The majority of the reports that circulated, however, shared a theme: that there were Ravnos in the city reducing even the most carefully hidden havens to cinders.

Malachi, Lladislas, and Victorine Lafourcade each longed to move to safer areas of the city but feared leaving each other's company even more. A shredded corpse and yet another disappearance, the suspicion and distrust canceling at conception any thought that the source of these horrors might be from outside their ranks.

Before the last hot spot had been extinguished, Pier 13 received her precious cargo. From the shadow of a nearby warehouse Semsith emerged, seemingly followed by a darkness that was reluctant to leave his side. He greeted the elder Gratiano, confident that, with the controlled chaos securing the Lasombra grip on Baltimore, he would be more than satisfied.