A popular ‘unofficial’ event format is Create-A-Clan. Originally devised by Ben Peal and nicely summarised by Jussi Hattara here it is a fun format that lets you come up with your own vampire ideas.

A slight spin on the format is to have a go at bringing to life some of the other ‘canon’ vampire bloodlines from the Vampire: The Masquerade universe. I thought I’d take the time to describe some of them here. (More to follow next month.)

The Noiad are an ancient Gangrel bloodline that have in modern times faded to obscurity. They claim to be the first Cainites to enter Europe thousands of years ago. Legend has it they followed a mortal tribe known as the Samí northwards into the lands now known as Norway, Sweden and Finland. They consider themselves the servants of the pagan gods worshipped by the Samí, and consider it their duty to guide and protect the tribe from their enemies.

The extreme conditions of their native lands mean that every year they must endure several months of constant daylight. During this time most Noiad fall into shallow form of torpor and rely on faithful members of the tribe to periodically wake them and feed them. This arrangement requires a great deal of trust and understanding between the bloodline and the Samí people.

Also called Wanderers, the Noiad are actually fiercely territorial and refuse to travel far from their domains. They practice the Disciplines of Animalism, Auspex and Protean, and they use their supernatural powers of perception to interpret the signs of the northern lights, which they believe to be messages from their pagan gods.

The Tlacique are another venerable bloodline that flourished in South America many years before the continent was conquered by Europeans. Although Kindred scholars posited that their origin must have been from the Gangrel or Setite clams, the Tlacique themselves claimed descent from Tezcatlipoca, the Aztec god of night and black magic.

In fact, many credited the growth of the mortal Aztec Empire to the prevalence of the Tlacique, with each city ruled by a different elder of the clan and his brood. The coming of the Europeans and the spread of smallpox did much to undo the Empire, but even worse to the Tlacique was the coming of the Sabbat. Foolishly considering them as allies against their common enemy, the Camarilla, the Sabbat quickly turned on the Tlacique, stealing their relics, aping their sacred rituals and diablerizing their most esteemed elders.

In modern nights the remaining Tlacique are a scattered and dispirited lot. They practice the Disciplines of Obfuscate, Presence and Protean. Some also learn a special form of Thaumaturgy called Nahuallotl, the knowledge of which also grants special status within the bloodline.

The Old Clan - also called the Oradea League, after the region of Europe where they are based - are a small group of powerful Tzimisce elders that refused to participate in or support the formation of the Sabbat. Following their survival of the Anarch Revolt they have remained staunch allies even in the Final Nights, adhering to strict rules which compel them to protect each other, and which forbid them to sire any progeny.
This Old Clan, have also shunned the practice of Vicissitude their entire unlives, favouring instead the Disciplines of Animalism, Auspex and Dominate. Many of them are also powerful magicians, versed in their own special form of Thaumaturgy known as Koldunic Sorcery.

It is said that the Azaneali – also called Angellis Ater (literally ‘Black Angels’) – are the descendants of the great Baali Azaneal. Devoted to the worship of the great darkness of the Abyss, in ancient times they were rumoured to have discovered great secrets in the ruins of the fabled city of Chorazin.

Although they are rare in modern nights, they are rumoured to still exist, and are quite powerful. They most commonly practice the Disciplines of Daimoinion, Obtenebration, and Obfuscate, although some may also possess Dominate and Presence.

Also known as Gorgons, the Lamia are an offshoot of the Cappadocian clan devoted to the worship of Lilith, said to have been created by Lazarus himself. Predominantly female – male Kindred of the bloodline exist but are never given positions of power – they were prevalent in the Middle Ages, serving as bodyguards to their parent clan until it – and they too - were decimated by the Giovanni.

In modern nights the Lamia are widely thought to be extinct, but may still persist in places where the Giovanni have not thought to look for them. The worship of Lilith, the Dark Mother however has definitely survived, and can now be found as a Path of Enlightenment practiced by some Sabbat.

The Gorgons practice the Disciplines of Fortitude, Potence and Necromancy. They are keen scholars and also ferocious warriors.

The Capuchin is one of the most mysterious figures from Cainite myth and legend. Rumoured to be Lazarus, the faithless childe and sole surviving progeny of the late Cappadocius, the Capuchin has cropped up numerous times in Kindred history as an enigmatic and powerful figure.

After Augustus Giovanni destroyed his clan’s founder the Capuchin approached him with a deal – in return for his knowledge of Necromancy the latter would offer him the secrets of the Vatican. 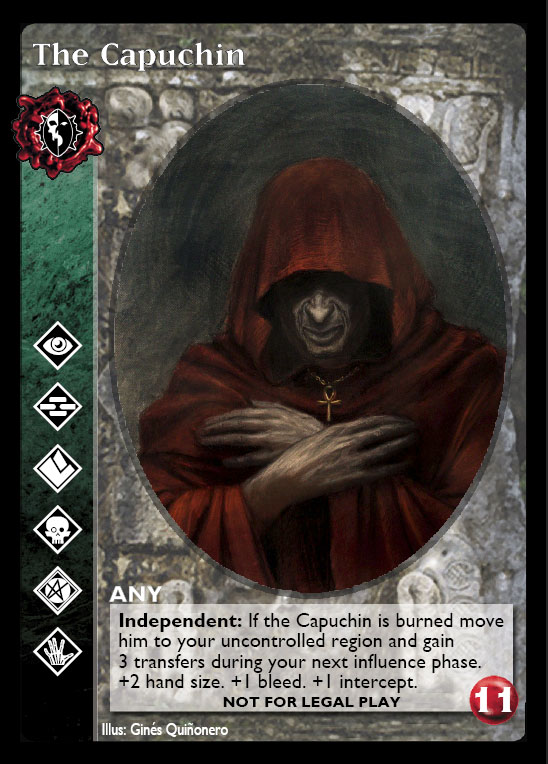