My musings on the Create-a-Clan game format last month led me to think about other Bloodlines, and their unique Disciplines which have not yet received the V:TES treatment.

The Lhiannan are one such example. A pagan offshoot of the Gangrel clan, they are first mentioned in the Dark Ages Companion, and it is implied that they were made extinct long before the modern era. Their unique Discipline of Ogham was a form of Celtic magic linked to the wielder’s environment and home territory.

The Lamia (mentioned last month) were also originally described as having their own Discipline of Deimos (which focused on conjuring nightmares, poisons and doom) before they were re-written in Dark Ages Vampire to possess Fortitude instead.

An ever more obscure reference is that of Bardo, a Discipline formulated by the Children of Osiris who are not a Bloodline as such, but a tiny coalition of Independent Kindred who reject the notion of vampirism and seek to retain their Humanity. First mentioned in the original A World of Darkness: Mummy book, the Children of Osiris were founded by Khetamon, apparently the only surviving progeny of Osiris.

Legend has it that Osiris was made undead in ancient times before his brother Set, and used the dark power of his blood to rule the land of Egypt and to wage horrible war upon his enemies. Set was cast out from his home but after becoming a vampire himself he returned to contest the dominion of his brother. Osiris’s mortal family were caught in the terrible conflict. Isis, his sister and his wife was a great sorceress and when Osiris was torn into many pieces by Set she used her power to reconstitute his body and resurrect him. She perfected her Spell of Life and used it again when their mortal son Horus was slain – he was the first of the living Mummies created by the Cult of Isis.

Osiris was eventually utterly destroyed by Set and it was left to Horus to continue the battle. Horus and his fellow Mummies proved to be formidable adversaries and so Set schemed to learn the Spell of Life to create his own Immortal army. To this end, he turned a priestess named Kementiri against her sisters, and using the incomplete fragments of knowledge she stole from the Cult of Isis he created the twisted Bane Mummies.

The Discipline of Bardo developed by Khetamon is detailed in the book The Hunter’s Hunted, which paints the Children of Osiris as potential enemies of any Kindred coterie. Although primarily interested in the destruction of the Followers of Set, they will align themselves against any vampires that flaunt cruelty and forsake their Humanity.

Here I have enclosed a small set of cards to represent the Children of Osiris and the Discipline of Bardo in VTES. These cards can be used print-and-play style in any game where all players agree to their use beforehand – this includes other Storyline events and game formats (including your Returned league).

Montano is reputed to be the first progeny of the Lasombra Antediluvian, and was allegedly always his favourite childe. As a mortal Montano grew up a tribal warrior of the Massai in Africa. He was Embraced long before the time of Christ and travelled far and wide for centuries before settling with his sire in Italy.

At the outset of the Anarch Revolt Montano was sympathetic to the cause of the rebellion but as soon as it became threatening to the Clan and to Lasombra himself out of pragmatism he sided with the conservatives to crush the Anarchs. It was only after Gratiano’s betrayal and their sire’s destruction that he came to hate them.

Montano retreated from public affairs not long after the formation of the Camarilla. As a master of the energies of the Abyss he has surfaced from time to time to try and teach a select few the same dark arts. Most recently he emerged from hiding to assist Lucita of Aragon in quashing a group of rogue Lasombra who tried to summon the shadow of the clan’s founder from the Abyss. 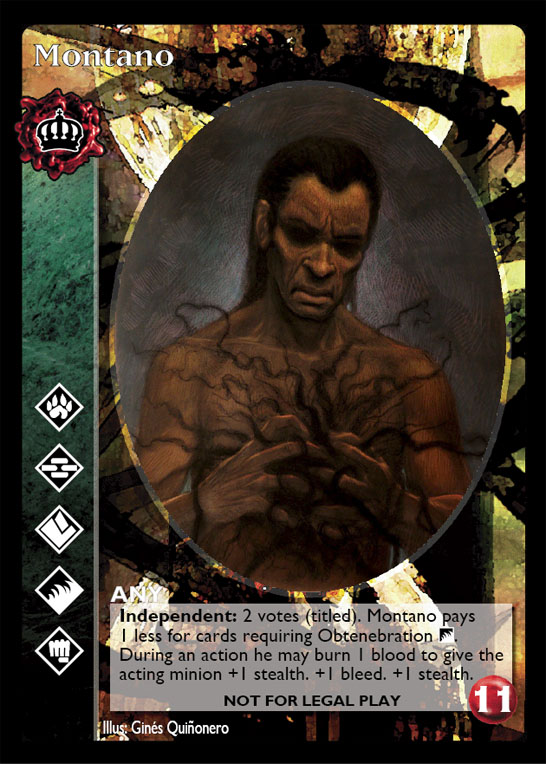