As I type this I am sitting in the Hotel Luxa in Mannheim, looking forward to playing VTES at this year’s European Championship, which also marks the 20th anniversary of our favourite card game. I don’t have any new rules or cards for you this month, but I thought I would take the opportunity to reminisce a little bit.

When Vampire: The Masquerade was first published in 1991 it really rocked my world. I’d already been roleplaying for a few years and had tried many ‘classics’ including Dungeons & Dragons, Paranoia and Call of Cthulhu. However I hadn’t yet found a game that I could claim as a games master but as soon as I saw VTM I knew that was it.

It wasn’t just that that game was new and was cool but it really changed the way people looked at the hobby – it really made you think about background, motivation and your character’s place in the world. Actually, what actually stood out the most, was not the VTM rulebook itself, but the first official scenario book Ashes to Ashes, which laid out very neatly how to tell a non-linear story with emphasis on the drama and conflict that might be present in every scene. As a teenage, fledgling Storyteller this information was invaluable and left quite an impression.

A couple of years later I discovered Magic: The Gathering. My first taste was at the convention GenCon UK where Wizards of the Coast were demoing the newly released Revised base edition. I was quickly hooked and so were my friends when I showed them the game after I got home. As a fan of both the Vampire RPG and the Magic CCG it was only natural to take up V:TES (or Jyhad as it was originally called) as soon as it was released. I have many fond memories of taking over tables in the common room of our sixth form college with our V:TES games, and sometimes even missing lessons to allow the games to finish.

Collectible card games were something of a phenomenon and V:TES was not the only one that I invested in. I also collected quite a bit of the Babylon 5 and Doomtown CCGs too – the thing in common with all three games was that they were primarily multi-player games and encouraged socialising and a high degree of player interaction. V:TES of course is the standout in this respect in the way it encourages you to bluff and manipulate the other players at your table.

Because of this social element, V:TES has attracted probably the most interesting fan base of any game I have ever seen. I attend official tournaments not just to play V:TES but to catch up with many people that I regard as my friends, and international events have given me an opportunity to meet great people from all over the world. I am proud to be a fan of the game, and a member of the VEKN.

V:TES has also achieved something very rare and very special within the games industry – it has come back from the dead due to the loyalty and support of the fans. Although the game is currently out of print again, I remain hopeful that this could happen again, and that I will still be playing at big events like the EC for many years to come.

Thanks to all of you for participating in the Returned Storyline event. In way of thanks I offer a bonus, seventh vampire to allow you to continue the Returned League for another month (see below).

Remember that those of you attending the EC are welcome to use all of the Returned vampires in friendly games (regardless of League results).

Although you do not need to send me your Returned League results, I would be interested in any feedback you might have about the event format or the crypt cards that were offered.

I also intend to continue this Storyline Diary in a similar spirit, and would welcome any suggestions for new cards or new game formats that I would include here in future posts for the benefit of the V:TES community.

In the world of Vampire: The Masquerade, Vlad Tepes is a master schemer and manipulator that has always approached the world on his own terms. Schooled in the Ottoman court from a young age to be a political puppet, as an adult he turned upon hjs former masters and fought fiercely for the independence of his homeland Wallachia. He developed a reputation for cruelty and ruthlessness even before he become a creature of the night.

He encountered vampires as a mortal and was fascinated, but refused to be influenced by them. The circumstances of his Embrace were scandalous – he kidnapped the Tzsimice elder Lambach Ruthven and took his blood by force to complete his transformation. In the centuries since he has become an enigmatic and legendary figure. He is rumoured to have been in many places, fought in many battles, and to have been responsible for the demise of many Kindred. Over the years he has spent time with the Camarilla, the Sabbat and the Inconnu but few are sure where his true allegiances lie. 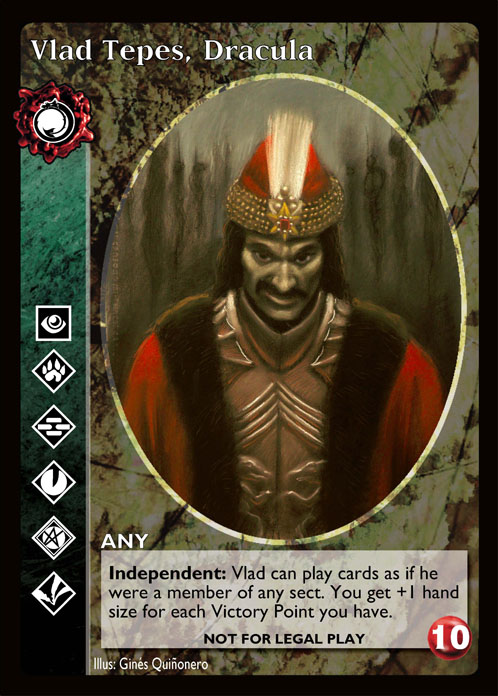