This month I offer a new game format called ‘Rise of the Nictuku’ which uses a special deck inspired by the Nergal deck offered in Infernal Plague storyline from 2004.

The Nictuku are dreadful creatures and the childer of the Nosferatu clan founder Absimiliard. Legend has it that he Embraced these monsters specifically to hunt and destroy all of the other vampires descended from his blood. Many modern Nosferatu consider the Nictuku a myth, and a story used to scare fledgeling neonates. However, they are all too real, and are terrible to behold.

This VTES game format presents a special constructed Nictuku Deck, which should be used just like a regular VTES deck, except that it contains a number of special crypt and library cards which are unique to this format (and which are illegal outside of this format).

The Nictuku Deck contains 70 library cards and 4 crypt cards - whoever plays with the Nictuku deck will always start with the same 4 vampires, and these are the only vampires they will have for the whole game.

Before play begins there will be a blind bid for control of the Nictuku deck. Each player will take a number of tokens in secret into his or her hand, and then all players will simultaneously reveal their bids. The winning bid takes the Nictuku deck, and the number of counters bid by the winner will be subtracted from his or her pool before play begins. I.e. if someone bids 4 counters for the Nictuku then they will begin play with 26 pool (instead of the normal 30). If there is tie for the highest bid, then break the tie randomly (e.g. with a coin or a die).

There will then be a second blind bid for the seating of the rest of the table. The Nictuku player will always sit first, followed by whoever bids the least, followed by the next player and so on. Hence, whoever bids the most will choose their seat last (similar to the manner in which tournament final seating is determined). In this bid, all counters bid by each player will be deducted from his or her starting pool. Again, if there is a tie for any bid then break the tie randomly.

During both bidding processes it is possible to discuss your desire to play Nictuku (or not), the contents of your constructed deck, and/or your preferred seating position in advance. However, it is not necessary to be truthful, and no agreements made during this game setup process are binding.

In addition to the above and the normal rules for VTES, for any game where the Nictuku Deck is used the library cards Recalled to the Founder, Nosferatu Putrescence, The Portrait, Whispers of the Nictuku and Petra Resonance are banned and cannot be played. The normal predator-prey relationships should be observed, with victory points and game wins scored as normal.

There is one further special rule for this game format in that once during the game the Nictuku player may shuffle his or her ash heap back into his or her library.

Mithras is a truly legendary vampire of the Ventrue clan whose birth pre-dates the Roman Empire of antiquity and who for many years literally walked as a god among men. From the Middle Ages to the 20th Century Mithras claimed the great city of London, England as his domain - although for much of this time he delegated the running of the territory to subordinates. Widely acknowledged as one of the most powerful Kindred of the Camarilla, his peers were keen not to anger him, and were eager to seek his counsel.

During the Second World War Mithras’s haven was bombed and the powerful Kindred sunk into torpor, allowing the world to believe he was destroyed. He surfaced again decades later but before he could announce himself he was attacked in succession by werewolves and then by the Sabbat.

The Assamite antitribu Monty Coven came away from the fight believing himself to be victorious, and to have devoured the hearts blood of the mighty Methuselah in the act of diablerie. However, ever since Monty Coven has not been himself, struggling with the will of Mithras that now co-exists within his mind and his veins.

This crypt card of Mithras could be considered to represent the mighty Ventrue at the height of his power. Alternatively, with his extreme levels of Dominate, he may simply have altered the memories of those that attacked him to suit his own ends. Or, more chillingly, the card may represent the complete subjugation and transformation of Monty Coven’s body into a new incarnation of this very powerful Methuselah. 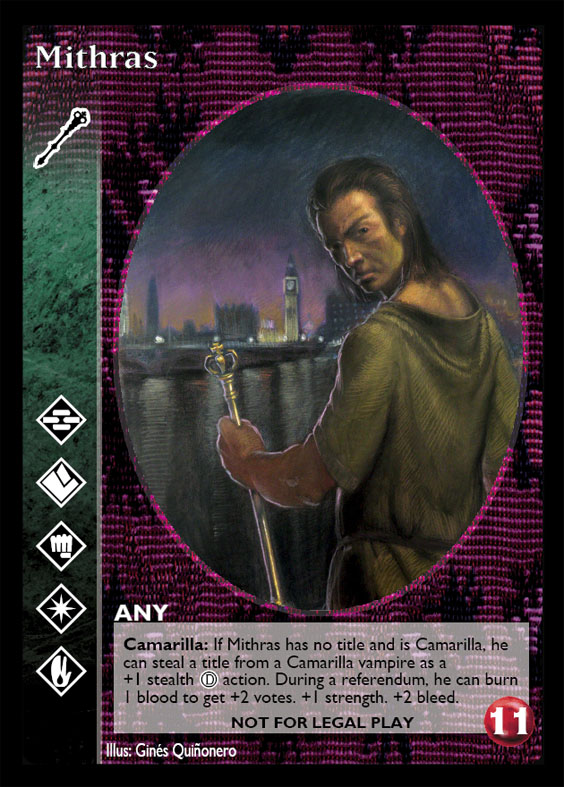