Greetings fellow Methuselah
A new year, with new battles! While the future of V:TES still remains wrapped in riddles and secrets, we old bloodsuckers do love our nostalgia, don´t we? This month the newsletter offers a double-dip into the nostalgia sauce bowl, with both a look at an ancient document of Noddism and a hardcore peek into the turbid but useful rearview mirror that is the beloved TWDA. Enjoy!

REMINDER: GRAND PRIX BELGIUM 24-25 FEBRUARY
Welcome to a weekend of V:TES at the European Grand Prix tournament in Mechelen, Belgium, the last weekend of February 2018. A three day event is promised, with Friday night socializing, Saturday draft tournament and Sunday the constructed Grand Prix event. For more details check out the VEG site, the official forum announcement or the event Facebook page. 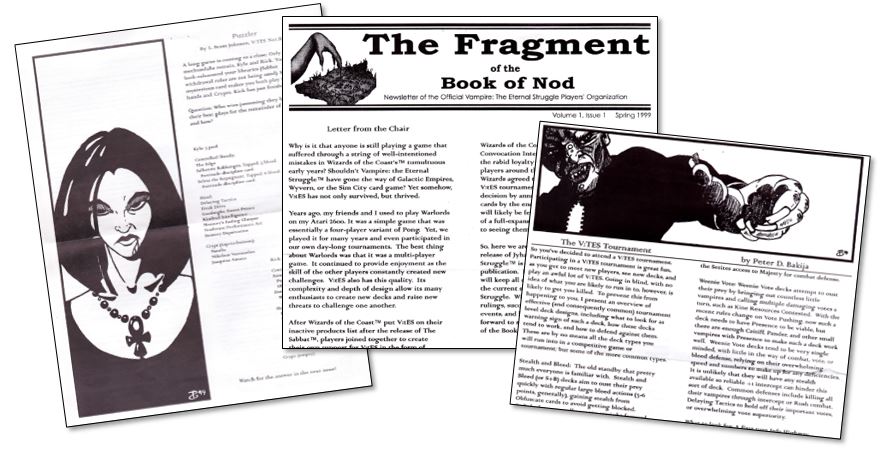 V:EKN Chairman Emeritus Robert Goudie remembers: “The idea of the newsletter was the brainchild of Mike Bohlman. He wrote one of the articles as well, but he was really the one responsible for the project. I recall him getting money for subscriptions and then eventually refunding them before too long. Peter Bakija, if I am remembering correctly, did the art. I don't recall of there were any other issues ever printed.”

But there were more! And the V:EKN intend to republish any we can get our hands on. The whole first letter can be downloaded at www.vekn.net/images//stories/downloads

ANTHOLOGY STILL FOR SALE
Yes, until we hear something else, there are still packs of the Berlin Anthology left at the PDA web shop. Including Ashur Tablets, Enkil Cog, Monastery of Shadows as well as many never before printed cards. These packs are indeed worth 30 euro – don´t hesitate!

In honour of 20 years anniversary of the Tournament Winning Deck Archive (TWDA), we will publish a series of articles about classic deck archetypes. This month we have summoned the assistance of two veteran tournament winning players, Darby Keeney (Denver, USA) and Tiago Brum (Lisbon, Portugal), to ask them about their views of the Ventrue Lawfirm archetype, named after the lawyer-ish appearance of its original signature vampires Emerson Bridges, Sir Walter Nash and Timothy Crowley. As a starting point for this discussion, lets take a look at the oldest Lawfirm-like deck in the TWDA:

Henrik: Gentlemen, would you consider taking this deck archetype to a tournament in 2018?

Tiago: Yes. It has always been strong, with adaptations and updates due to cardpool increase and meta evolution. It is also the type of deck that got me into V:tES, so I have a soft spot for it in my heart.

Darby: In a broader context, I think Lawfirm decks are a subset of multi-action bleed/vote designs. When the phrase was coined, the Ventrue monopolized that niche – but do no longer. I believe that the entire class remains highly competitive, with a slight edge to the stealth-enabled variants.
I suspect the reliance on political actions requires a more deft touch these days. The trend towards large vampires makes spurious titles common and pure vote dominance is harder to achieve.
As for the deck you referenced, errata have made it unplayable.

Henrik: Yes, of course; Hostile Takeover, Fifth Tradition: Hospitality and Majesty were all subjects to tough errata after this deck was created. But considering the archetype itself, what do you think is its greatest strengths?

Darby: I believe there are two components that make this archetype potent: Most importantly, the opportunistic nature of a Lawfirm's offense capitalizes on moments of others' relative weakness. Even as midgame pool totals trend higher than historical totals (blame Villein), one good turn of multi-action offense can create a enough offense to create ousts. Sustained pressure is possible, but it's really the large surges that create victory points.
Also, the Lawfirm's ability to survive long enough to be opportunistic. Reasonable bloat, plentiful bleed redirection, a significant defensive vote presence and abundant combat defense provide enough staying power to reach those ousting opportunities – with bleed redirection directly feeding into the deck's own significant offensive potential.
I'll also mention that a subtle part of well-conceived, well-driven Lawfirm is having the means to shape favorable endgame match-ups. In particular, seeing dedicated intercept, combat decks or dedicated voters ousted early is important for endgame success.

Tiago: It is a deck that can interact with the whole table. It has two solid kill plans in politics and bleed. It doesn't look as threatening as other archetypes until it is too late and it can survive very well (if you keep cycling cards!). It is surprisingly resilient. Preferable opponents are those who struggle to get constant +1 intercept blocks. Another marginal advantage is that these days, this deck has a crypt that is very similar to the Ventrue Grinder, so it has the tactical advantage of surprise.

Henrik: And what do you think is this deck archetype's worst weaknesses?

Tiago: +1 intercept stops Ventrues. That's what I always say. You need to act in bursts of multi-action with Majesties and Freak Drives, because you need your actions to go through in order to build up, or impact the table. That is why in modern day V:tES we see other decks that rely much more in Master-based engines to build table states of dominance.
Also, these days, people are using a lot of Delaying Tactics. In the right moment, it can stop you dead.
Most other decks either use stealth to make sure they are not blocked, or punish possible blockers. This deck cannot afford to do that ...

Darby: Firstly; clearly, the greatest weakness is a generalized limit of +1 stealth for any action taken. That weakness is compounded by a combat module that completely fails to discourage blocks. The design intent offsets that with overwhelming action density, but until blockers become forced to choose between opportunities, even casual blocks present a real challenge to gathering momentum.
An early magaji with No Secrets is an almost insurmountable obstacle. With Eyes of Argus, Second Tradition, Sense the Savage Way and The Unmasking becoming so prevalent, there are more casual blocks in today's environment. It is exactly this issue that makes stealth-enabled variants more successful in contemporary play.
Secondary: A pure combat deck nearby is also a serious problem – especially when the rushes target the Lawfirm's initial minion. The combat-multi-action module can often be re-purposed for defense, but assistance is almost always required to withstand any well-designed pure combat deck.
Beyond that those two serious early threats to the growth curve, the early table is defined by the archetypes of the Lawfirm's grandpredator and grandprey – specifically their vote presence and how terms must be set to gain their cooperation.

Henrik: So, if we look at Conor Key´s TWD again – what are the most obvious changes you would do to this classic version?

Tiago: I would switch the crypt – G4/5 is by far superior. For Ventrue in V:tES, there is a before and after the Keepers of Tradition set. Join the G5 Ventrue with Victor Pelletier, Mustafa the Heir and other G4 like-minded individuals. In broad strokes, I would reduce the deck to 75 to 82 cards tops and would focus a bit more on ”European stealth” (Editors note: Anarch Troublemaker, Misdirection and Pentex Subversion) and a few Daring the Dawns.

Darby: Oh my, there are so many necessary changes, even for the pure-mass Ventrue-only version of the deck. It starts with a decision for 1/2, 2/3 or 4/5 grouping – which I believe is metagame influenced but probably defaults to the G4/5 version.
The Master module needs tweaking; eliminating or nearly eliminating Hostile Takeover, swapping the Villeins for Minion Taps, removing the near useless Elysium and Tomb, then adding influence acceleration suitable for the crypt grouping. Maybe stealth locations slip in – Monastery of Shadows and Creepshow Casino.
The omission of Freak Drive, Parity Shift, bleed modifiers and Pentex Subversion is unforgivable. I believe that The Uncoiling is almost mandatory to address the rampant use of The Unmasking. I can't imagine playing a deck like this without several Perfect Paragons, 1 or 2 Approximation of Loyalty and 1 or 2 Daring the Dawn. Space can be made for these cards by removing Fifth Tradition, Political Ally and restructuring the political action package. I´d also swap 2 Murmur of the False Will for 2 Deflections.
Then, as I made these changes, I would trim the deck size by 10-15 percent before testing it – adjusting further downwards if testing showed that I seldom expended my library.

Henrik: Do you have any other comments about this deck archetype?

Tiago: There's a variant with Tomb of Rameses III and Parity Shifts that is very fast and aggressive with First Traditions and Kine Resources Contested to quickly remove pool from the table.
The difference to the similar Nosferatu Royalties archetype is Voter Captivations and the reactions coupled with Majesties that allow you to survive well even when you're not playing during First Traditions. Although it is very high in variance, it can be very fun.

Darby: To me, it seems like the real potential in the broader archetype lie in the stealth-enabled variants, either featuring Armin Brenner, Dmitra Ilyanova and Undele, or Arika, Queen Anne, Marcus Vitel, Muktar Bey, Jaroslav Pascek and Lucinde Alastor. I think the former is a more versatile choice, though it's not pure Lawfirm because it omits bleed redirection. It leverages three outstanding minion specials and the highly versatile Iron Glare, and it gains flexible stealth from Forced March and Resist Earth's Grasp. Dave Litwin's June 12, 2013 TWDA entry is one of the better examples with it's prototypes showing up in two previous wins.

Henrik: Many thanks to Tiago and Darby for these great comments! Personally I want to mention a Swedish aggressive high stakes variant we call ”The Bleedfirm”, created by Ivan Marin-Rivas (TWD) and Jens Johansson (TWD). If you want to learn more about this deck archetype and others, we recommend the Deck section at VTES One, a most excellent resource. Also, consider www.secretlibrary.info to easy find all TWDA decks. Hopefully we'll return with another Classic deck article really soon, possibly even next month. Until then, feel free to comment this content on the V:EKN forum or in social media.

"I take what is mine. I pay the iron price."