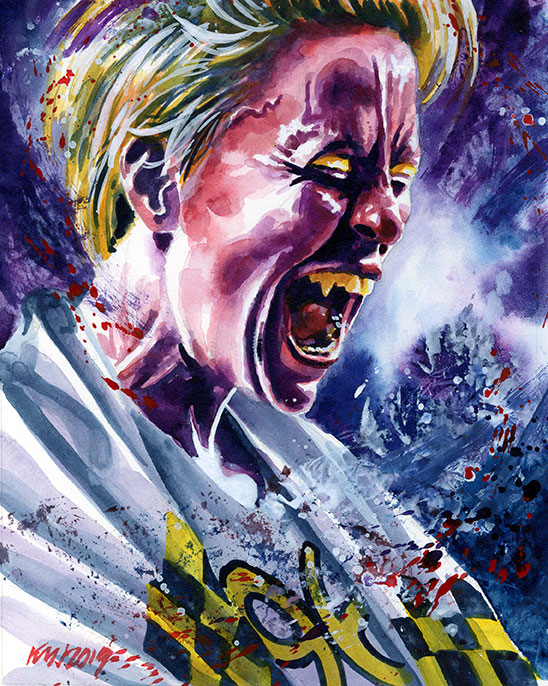 Greetings fellow Methuselahs
My first advice to youngling players of the Eternal Struggle is always: Trust no one! After you grasp the basic mechanics of the game, you really must stop listening to suggestions from the other Methuselahs. Remember that they are all ancient, bloodthirsty power-mad monsters! The only exception to this is when you play with me. I am very kind and will help you achieve great success. Together we will rule the world …

HAPPY 25TH BIRTHDAY VTES!
August 16 1994 is the release date of Jyhad, the game that one year later changed name to Vampire: The Eternal Struggle. Not only is this celebrated by the European Championships being held at that exact weekend this summer, but Black Chantry Productions is releasing an official celebration product. It features:

Details about the content will appear at the Black Chantry product page soon. Congratulations VTES and all VTES players!

VTES SOON IN BOTH PORTUGUESE AND RUSSIAN
For the first time in the history of the game, cards in other languages than English will be produced. We asked Hugh Angseesing, CEO of Black Chantry Productions, a few questions about this:

Hugh, why are Black Chantry translating VTES to other languages?
- Because for some geographies this will be the only way we can build up a new VTES player base there.

Why are Brazilian Portuguese and Russian the first two languages?
- About Russian: VTES currently has limited penetration in Russia and Russian speaking countries. This is a way to build a relationship with a local partner and see if we can develop something more. About Brazilian Portuguese: There's already a large playerbase there but we have difficultly getting cards into Brazil. It makes more sense to print locally and, if we're going to do that, we should print in the local language.

What other languages are up for translation after this?
- We first want to see how these ventures work out and see what we can learn. We have talked to some of our distributors about localised versions.  We have a small market game, so it's about where a local translation makes sense economically.

Will card names be translated? And keywords?
- We're working on this with our partners now, but that is our intent.

Do you see any drawbacks with translation?
- Two main things come to mind: One is the additional cost and expense of translating. The other is confusion for players looking at a card in multiple languages. We're looking at how best to resolve this e.g. rules and card rulings are in English, do we have an identifier on cards to enable mapping back etc.

Both Portuguese and Russian products are planned for a summer of 2019 release.

Read the official announcements: Portuguese (May 18) and Russian (May 25). 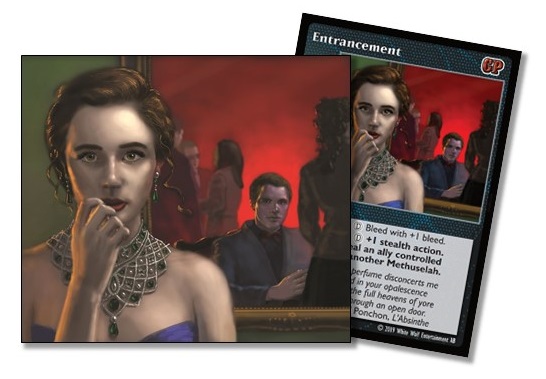 NEW ALTERNATE ART PROMO: ENTRANCEMENT
Black Chantry Productions has produced an alternate art version of Entrancement with artwork by Ginés Quiñonero. It will be awarded to all participants in European Grand Prix tournaments (in Helsinki or distributed retroactivly at the EC or by National Coordinatiors) and to all European Grand Prix tournament organizers. Thanks for attending and volunteering! 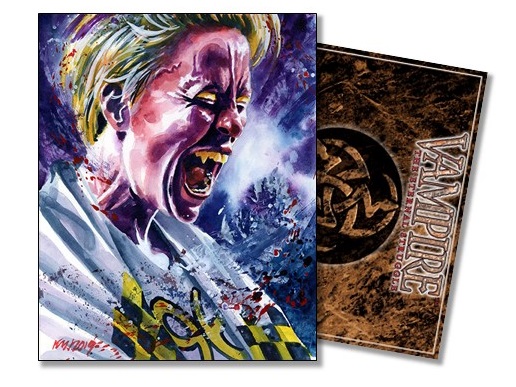 IN JUNE: NORTH AMERICAN CHAMPIONSHIP 2019
No less than 13 tournaments are held in Columbus, Ohio on June 9-16.

All participants of the NAC will receive a special promo card (art by Ken Meyer Jr. depicted above). Note: This card is brand new, but will be included in a future Black Chantry product.

Sunday, June 16
10:00am 2-round constructed tournament

NAC Day 1 and Day 2: no proxies
Every other tournament: proxies allowed

We will be in the main event hall of the Greater Columbus Convention Center: Hall C, C 105.

Here is the Origins Club Discount Code information:
Coupon Code: EYsYTpJX
1. Go to the Origins website (www.originsgamefair.com) and click on registration in the black menu bar toward the top of the page.
2. Click on the “Register Here” button below the black menu bar.
3. Select the “Full Show Badge” role when filling out the first page.
4. Continue through the registration process until the final/checkout page at the end.
5. Input the code below in the coupon code field and click “Apply”
6. Finish paying for your remaining balance.

As always, the Week of Nightmares will be happening at Fabian's Pizza on 691 N. High St Columbus, Ohio.  It starts on Saturday, June 9 at 2pm, with events running through Wednesday, June 12.  You can find the schedule on the VEKN website here: http://www.vekn.net/event-calendar?date=2019-6

RADEK WRÓBLEWSKI WINS GP POLAND 2019
May 25 and Warsaw was the time and place of this years Grand Prix Poland. 46 players from eight (!) different countries showed up for battle. The final table looked like this: 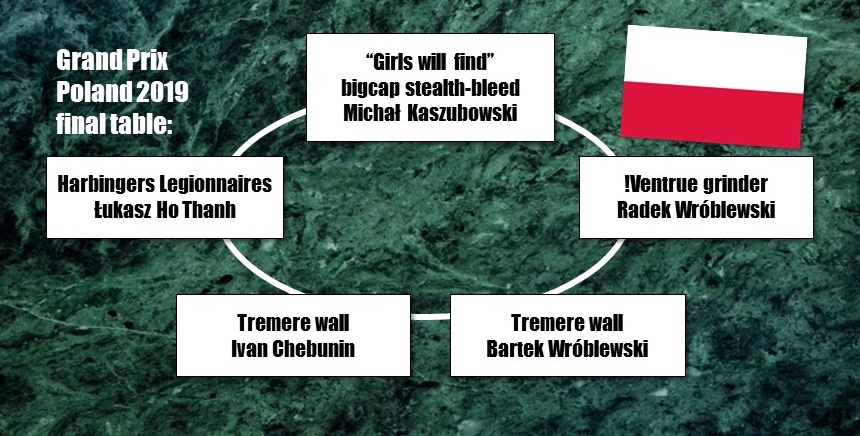 Congratulations Radek Wróblewski, GP Poland champion! He got 1,5 victory points in the final. For a tournament report, check out the VTES.store blog. 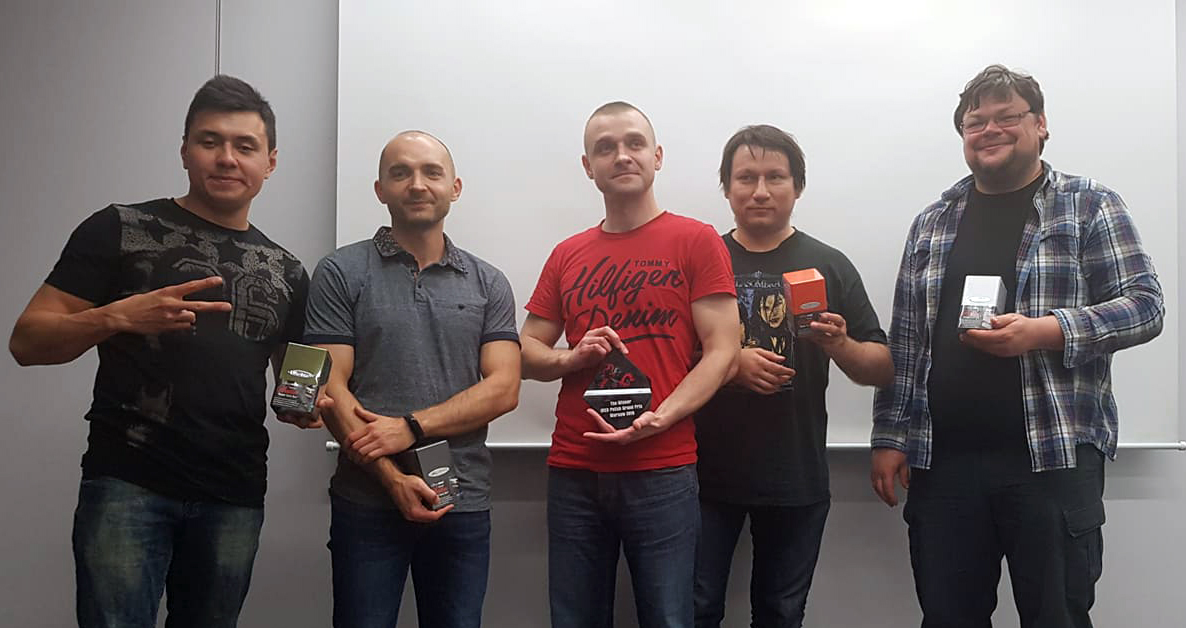 Finalists with champion Radek in the middle.

Thanks to organizer Radoslaw Staszewski, our sponsor Ultra Pro and all players!

JORGE DELGADO IS THE 2019 CHAMPION OF FRANCE
The French National Championship was held in Lyon on May 12. 32 players attended and the final table was this, with François Greiner as top seed: 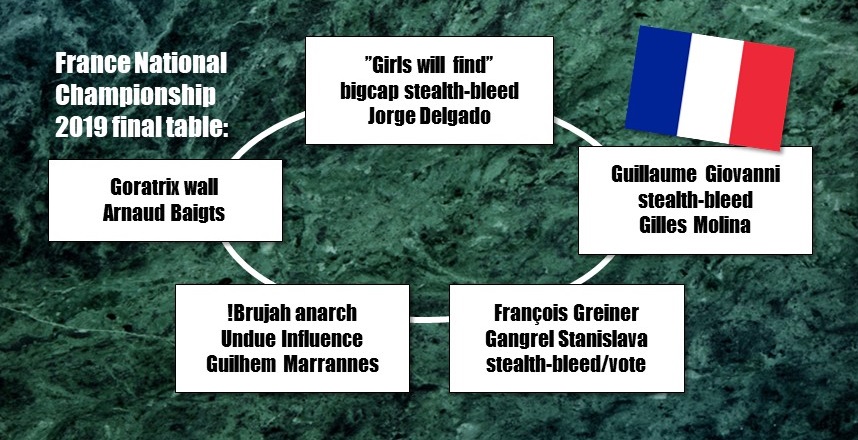 Congratulations Jorge Delgado, 2019 French champion! He scored 3 vps in the final, while Francois and Gilles got 1 each.

Event (1)
1x Scourge of the Enochians

Combo (2)
2x Swallowed by the Night 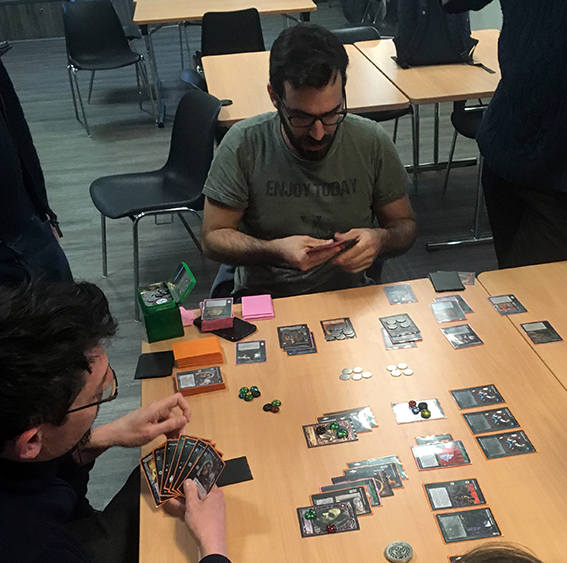 Thanks to organizer Mikael Lavallee, all attendants and our sponsor Ultra Pro!

SPANISH CHAMPION 2019: GABRIEL RON
The Spanish National Championship gathered 55 players to Barcelona on May 25. After the preliminary rounds the standings was Carles - Andreau - Ginés - Miki - Gabriel, and the final table looked like this: 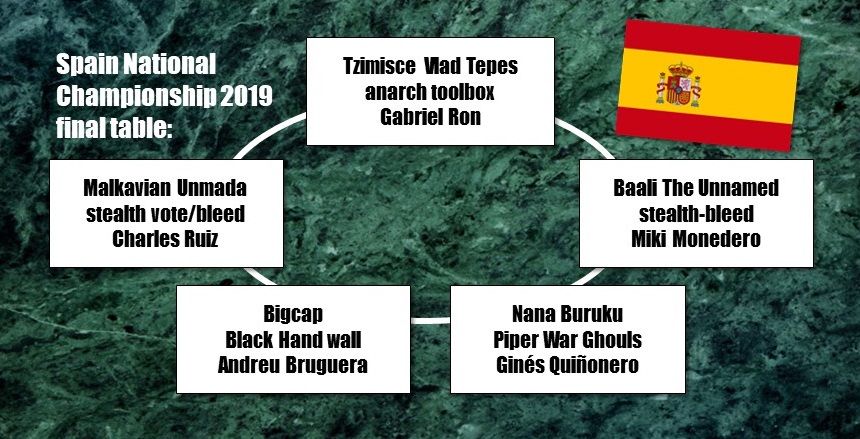 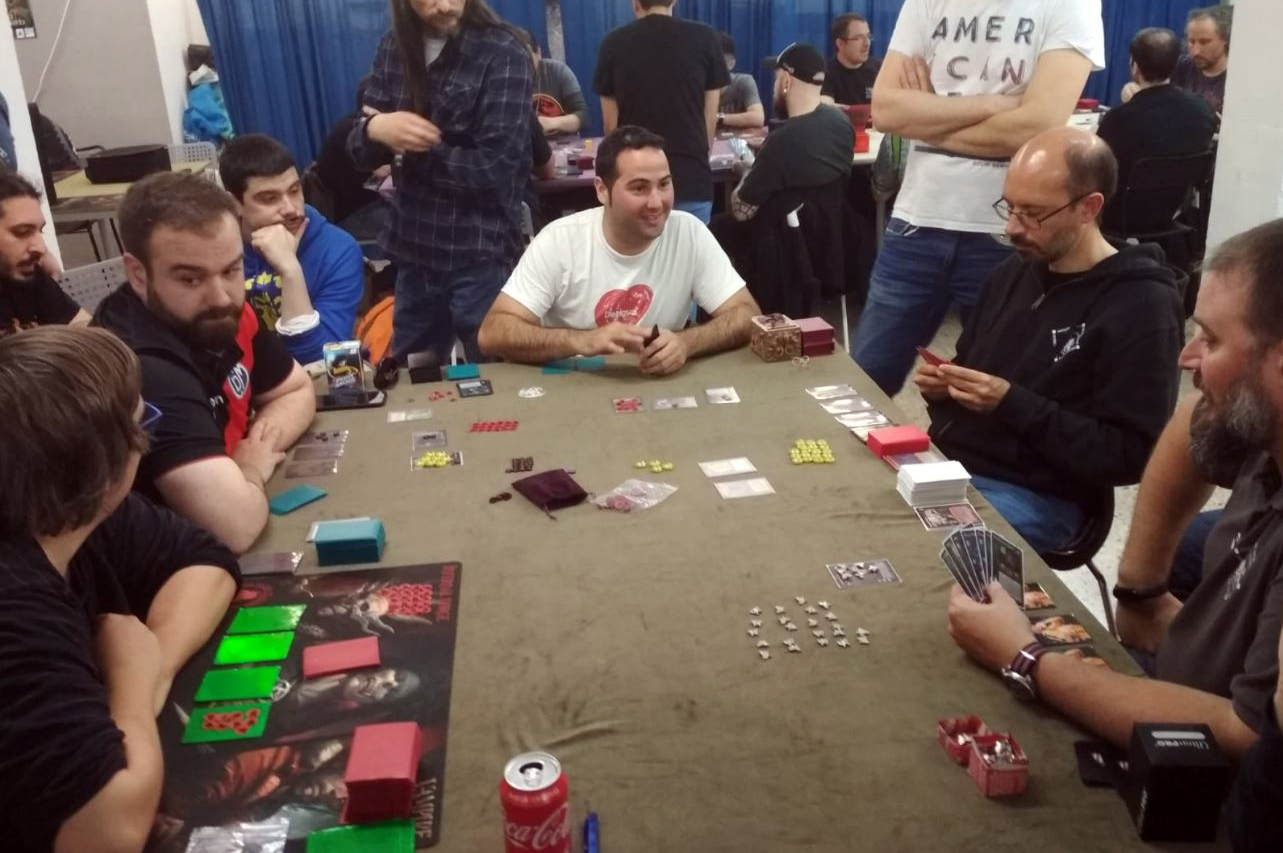 The final table with Gabriel Ron in top left corner. 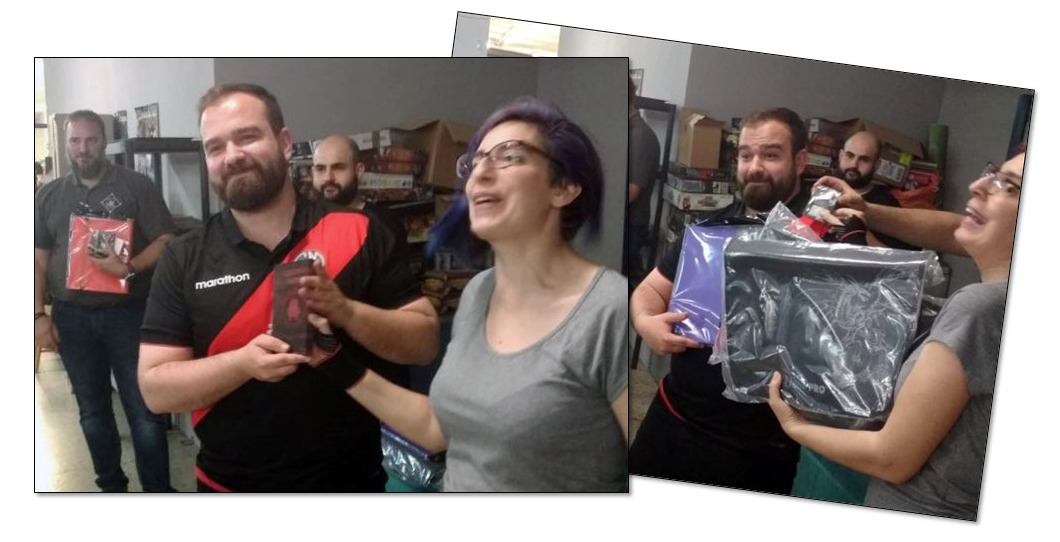 Thanks to the organizer Ion Pérez, the players and our sponsor Ultra Pro!

RALF “EXTRALA” LAMMERT 2019 GERMAN CHAMPION
The German National Championship was played in Bad Nauheim on May 25. 18 players turned up with teeth sharpened. Standings after three preliminary rounds were Ralf – Marius – Sascha – Joscha – Marius, and the final table was this: 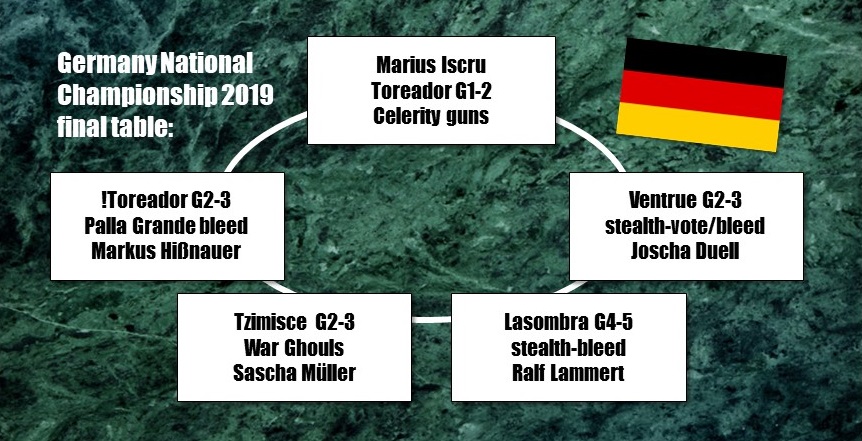 The new champion of Germany is Ralf Lammert (host of the website VTES One!) who got 2 victory points after full time, and won by being top seed as Marius also scored 2. (Joscha got 1 vp. Congrats Ralf!

More details and discussion can be found on the associated VEKN.net thread. 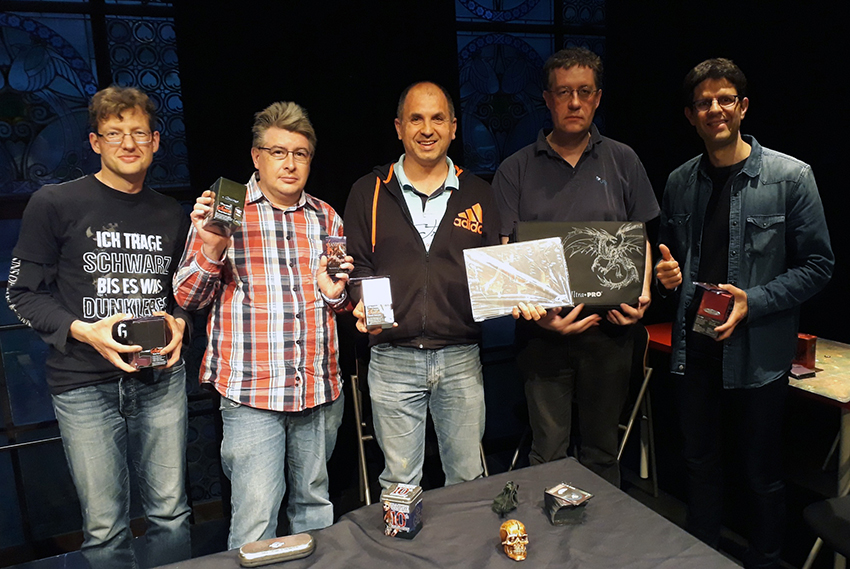 Finalists with prizes, Ralf fourth from the right - the least happy one!

VEKN would like to thank organizer Rudolf Scholz, all attendants and our sponsor Ultra Pro.

• Deals for translation of VTES to Brazilian Portuguese and Russian have been signed with partners Conclave (Brazil) and Studio 101 (Russia). If everything works out these products will be out this summer.

• The first round of playtesting of Camarilla-themed preconstructed decks has concluded. Testers reported to playtest coordinator Darby Keeney, who in turn compiled an excellent report to Black Chantry. Now adjustments will be made and a new round of playtesting begin within shortly.

• The finishing touches are put on the 25th Anniversary product that was announced May 26. It needs to be sent to the printer really soon in order to be ready for mid-August release. Details about the product will be disclosed soon.

• Black Chantry´s Chief Marketing Ghoul Henrik attended Stockholm Tabletop Game Expo May 11-12 to demo games and host a tournament. Black Chantry recognizes similar demo events are wanted all over the world, so plans for this are brewing. Help from volounteers are needed, but it's important they get rewards and appropriate tools.

• As stated above (about GP's and NAC) special promo cards will be produced to attract players to large events. In the case of newly designed cards, Black Chantry assures you that they will appear in future products too, so all players will eventually be able to get them – but without the event icon! 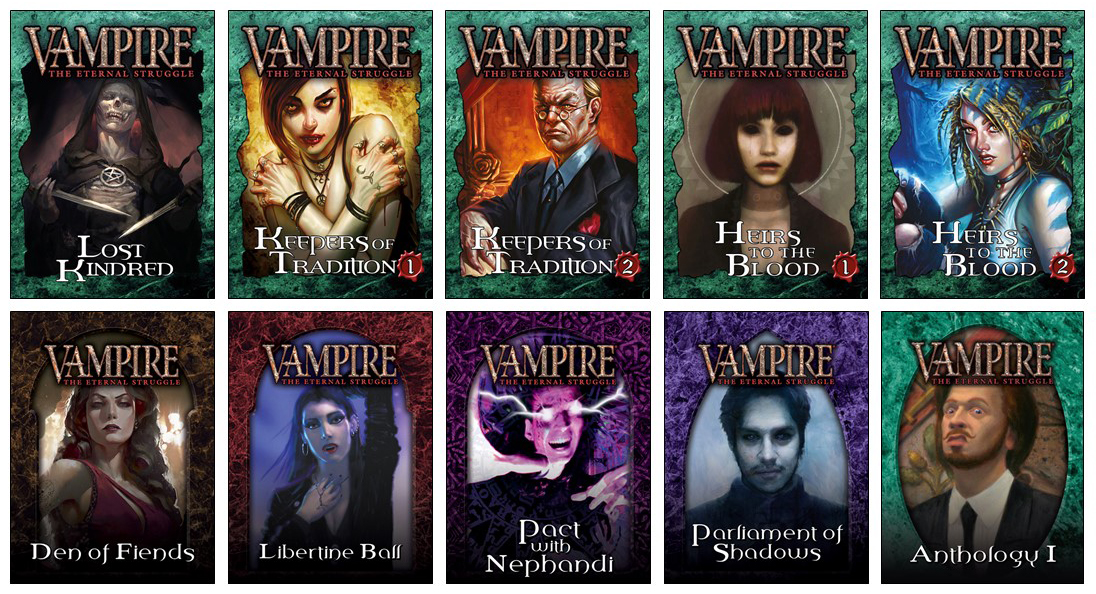 • The first opportunity for you to play “Bloodlines 2” will be at PDXCon in Berlin October 18-20. VEKN and Black Chantry will also make some kind of appearance at this 8,000 square meters event, for demoing or some kind of tournament – more information about that a bit later!

• Last week White Wolf made known that besides “Bloodlines 2” yet another Vampire: The Masquerade-themed computer game is coming your way. It will be a “narrative RPG” developed by Big Bad Wolf. Details will be revealed at the trade fair Gamescom in August.

• We really recommend the clan-themed videos Paradox Interactive has published about “Bloodlines 2”, hosted by Anders Carlsson and Florian Schwarzer. They videos are great for introducing new players to the clans! So far videos for Brujah, Malkavian, Toreador, Tremere, Ventrue and Thinbloods are out at the Paradox XL channel.