“Exciting news! Today we are opening Black Chantry's Official V:TES Discord server! The plan is to make one big, centralized place where we all can get games going on our time zone easily and to unite the community in a single diverse environment where we all can learn and have fun playing V:TES. There are dedicated language channels, so you'll always be able to play games and discuss V:TES in your preferred language. We hope to see you there!”

The upcoming online World Championship will be held on this new server:

Some thoughts from Mexico again – this time about a beloved game mechanic:

In Vampire: The Eternal Struggle, in addition to defeating your opponents through bleeding, there are other strategies to weaken the power and influence other Methuselahs weild in the game environment. One of the most effective strategies is undoubtedly the political one. In addition to being one of the aspects that is most closely linked to the roleplaying game that VTES is based on (Vampire: The Masquerade), in order to play politics, it is necessary to develop or perfect a series of skills that have to do with the social dynamics between players.

Playing politics in VTES represents actions that your minions carry out in the world by mobilizing vampire society as a whole, and for this you need vampires who represent that power in the game, which is achieved in various ways: holding a title within the sect to which they belong, using their disciplines, or through the support of powerful and influential allies who can tip the balance of power to one side or the other depending on your interests as a Methuselah. Politics is the essence of the Eternal Struggle among vampires.

The threads of politics can be subtly moved by making alliances with other players to gradually achieve your goals by offering deals or benefits for their help, controlling strategic places of power, or being the obvious power if controlling many titled vampires on the table. Things can be done either by deciding with an iron fist or by using your best negotiating skills to achieve your goals in each game.

Recommendations to play politics and not die trying:

1) Be patient. Building an empire takes time, so take small but firm steps to position yourself properly throughout the game.

2) Be blunt. When you carry out an action, have the resources necessary for your political actions to be effective, because otherwise you may be in for a nasty surprise.

3) Keep an eye on the development of the table. It is never necessary that, due to an oversight, an important action goes to waste. Check the votes on the table, who is also playing politics, who has the Edge, etc.

4) Keep a cool mind. When playing politics, you come to moments when your decisions affect the entire table (and those affected may not like the result). The outcome of your moves must lead you to victory.

And remember: VTES is a game. Sometimes playing politics leads you to situations in which emotions are overflowing, and your opponents may dislike the consequences of your actions very much. Stay focused on the game and wisely dispense favors and perks to win the support of the table, and when you're ready, play your political control stratagems decisively to emerge victorious in the Eternal Struggle!

Do you also want to contribute to this newsletter? Please contact . Hope to hear from you!

This was a busy month! Some highlights:

• The next four preconstructed decks (Banu Haqim, Brujah, Gangrel and The Ministry) are at the printer. All cards and deck lists have been spoiled. The shipping date is the release date: November 1. So these new cards will be tournament legal on December 1!

• A new batch of Legacy Card Singles was made available at Drivethrucards, this time Ravnos and Chimerstry, some with errata. More are being prepared.

• All the cards in the 2021 Promo Pack have been spoiled and should have reached at least some organizers and stores.

• The Unleashed Kickstarter is still under delivery, but hopefully the last on the list will have their packages when they read this. 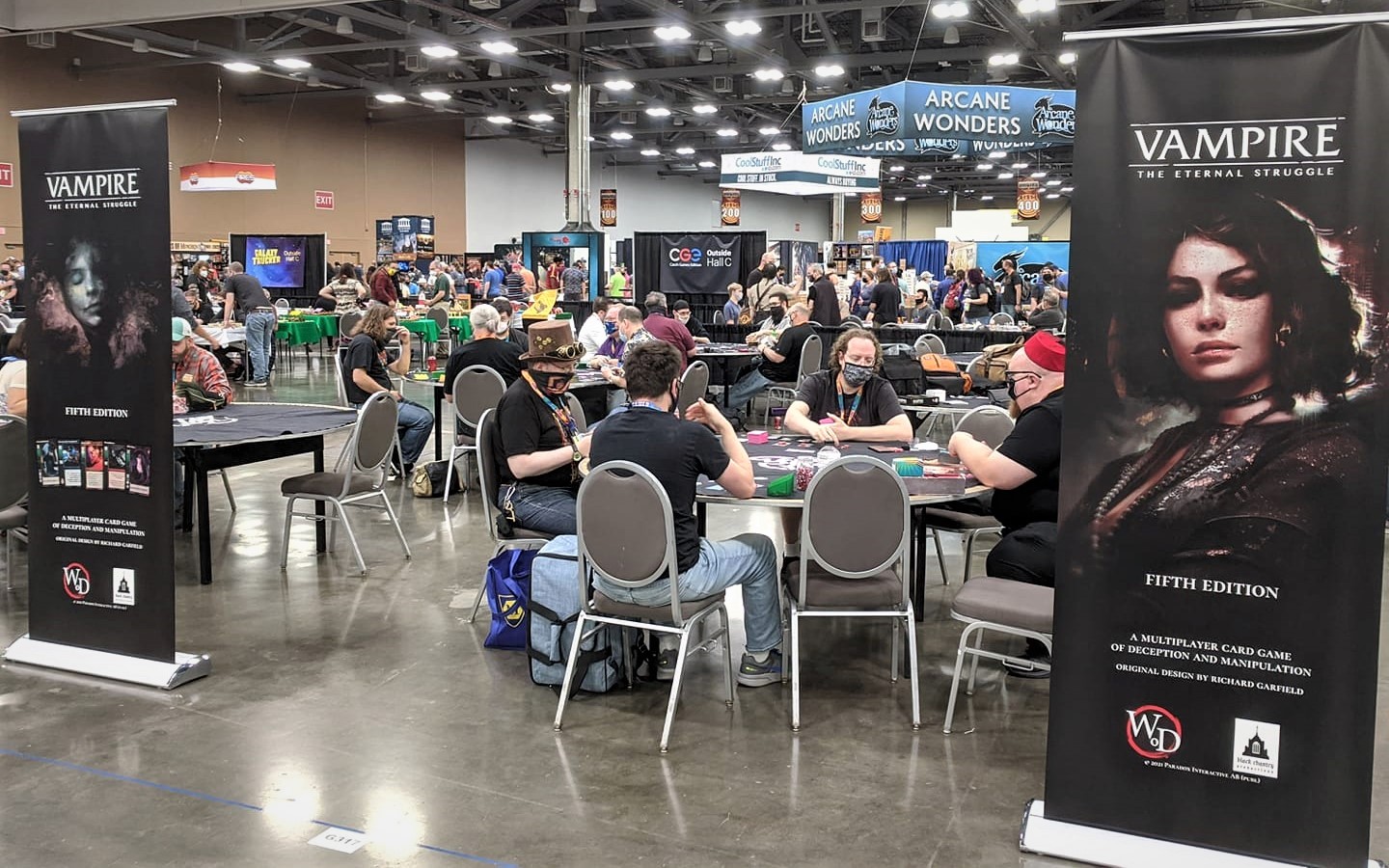 • Black Chantry´s Ben Peal was the head organizer at the North American Championship and the Week of Nightmares at the Origins Game Fair in Columbus, Ohio. The attenance was low because of the pandemic, but 13 tournaments were played, so still a lot of VTES. Karl Schafer wrote a report about these events at KSG-cards.com.

• Soon all artwork for the Fall of London-themed mini expansion is in, so cards can be templated and proofed. Release: Early 2022.

• A new version of the First Blood packs is being prepared. Not all reprints, but with some new cards. Release: Early 2022. 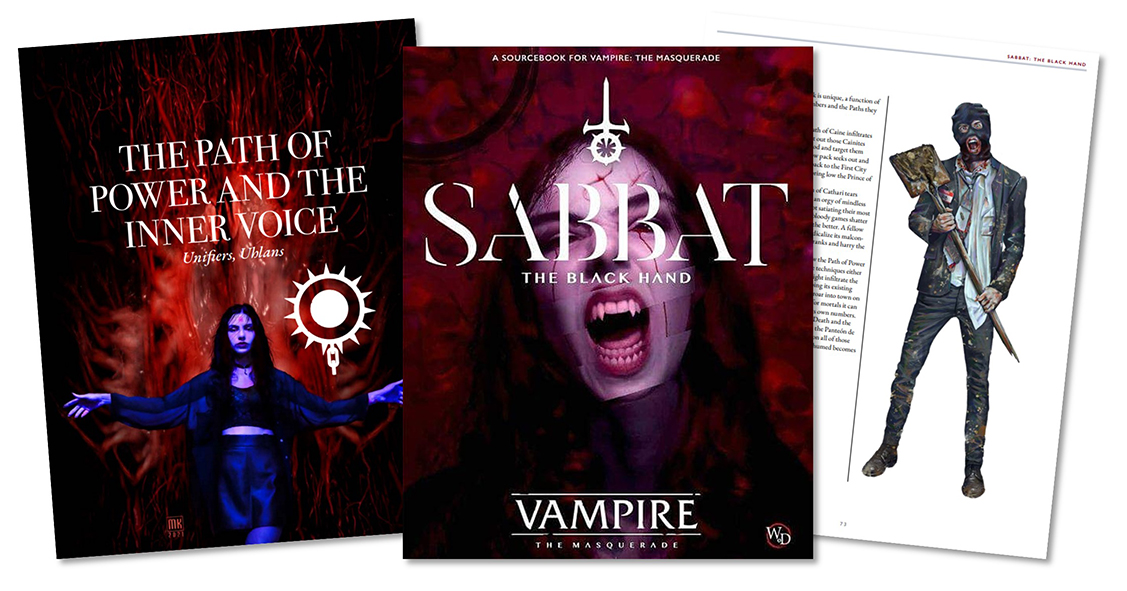 The brand new "Sabbat: The Black Hand" for Vampire: The Masquerade Fifth Edition is written by Justin Achilli, Alan Alexander, Khaldoun Khelil, and Karim Muammar. It starts like this: "Here is the most important sentence in this book: The function of the Sabbat in Vampire: The Masquerade stories is to threaten the status quo. The presentation of the Sabbat for the Fifth Edition of Vampire is as antagonists. The Sword of Caine is undeniably a monstrous evil that even the Kindred fear, a sect of vampire supremacists who set aside the perspectives of the still-living, believing themselves to be more than mortals."

This sets the tone. It will undoubtedly arouse feelings in the VTM community, but for VTES players it matters less. Methuselahs accept any minions, "monstrous" or "evil" matters little, as long as they convey power!

The 132 page, gorgeously illustrated book contains:
• Introduction (About mood and theme)
• Chapter 1: Setting Fire (General information)
• Chapter 2: Apostates of a Cruel Church (Details the Paths of Enlightenment, new discipline powers and rites)
• Chapter 3: Burn Brightly (More about behavior, objectives, titles etc.)
• Chapter 4: The Gehenna War (Origin and current events, all over the world)
• Chapter 5: Storyteller Resources (More on how to use the Sabbat in your chronicles)

We know that the Black Chantry design team has been digesting for a while now, trying to decide the future for the Sabbat sect in VTES. I know they appreciate your input. Exciting times await!

Also: Have a extra look at www.worldofdarkness.com this coming month, they are doing lots of exciting stuff in this special "Month of Darkness"!