GREAT EUROPEAN CHAMPIONSHIP ATTENDANCE
No less than 132 players have so far registered for the EC at World of Darkness Berlin! This is absolutely fantastic and we look forward to four days of great, competitive fun in Germany. Spain, France and Sweden have most registered players by now, and we also see attendants from as far away as Canada, Brazil and Chile. Tickets are still available at https://www.worldofdarkness.berlin/

ANTHOLOGY PREVIEWS ARE ONGOING
The last weeks you have been able to see previews of the brand new cards being printed for the Berlin Anthology set. So far we have presented eight crypt cards and one library card:

You have also been served a bunch of rules updates and new wordings:

Not only this, but we have shown the new exciting artwork for Field Training and Enkil Cog!

If you have missed some of all this greatness, check out this posting where all of it is collected: Anthology.

If you have any comments or input on VEKN work, be it rules stuff, design stuff, artwork or anything else, please discuss it on the VEKN.net forums or contact the appropriate VEKN board member at the contact forms page.

TWO STORYLINES REVEALED
In the March newsletter we told you some about the TWO new storylines premiering at World of Darkness Berlin event; The Ascension of Caine and The End of the Line. Recently we also published the actual rules and the associated new cards. If you missed this, check it out at Berlin Storyline events 2017.

While the V:EKN recommend that you play the storyline events either at the actual Berlin event or the same weekend at your own location anywhere in the world, you are free to do so any time during spring or summer of 2017. We await your results – check out the event rules for how to report.

If you are also interested in the LARPs and other activities during the event, check out updates on the event blog or the Facebook group WOD BERLIN: Social. 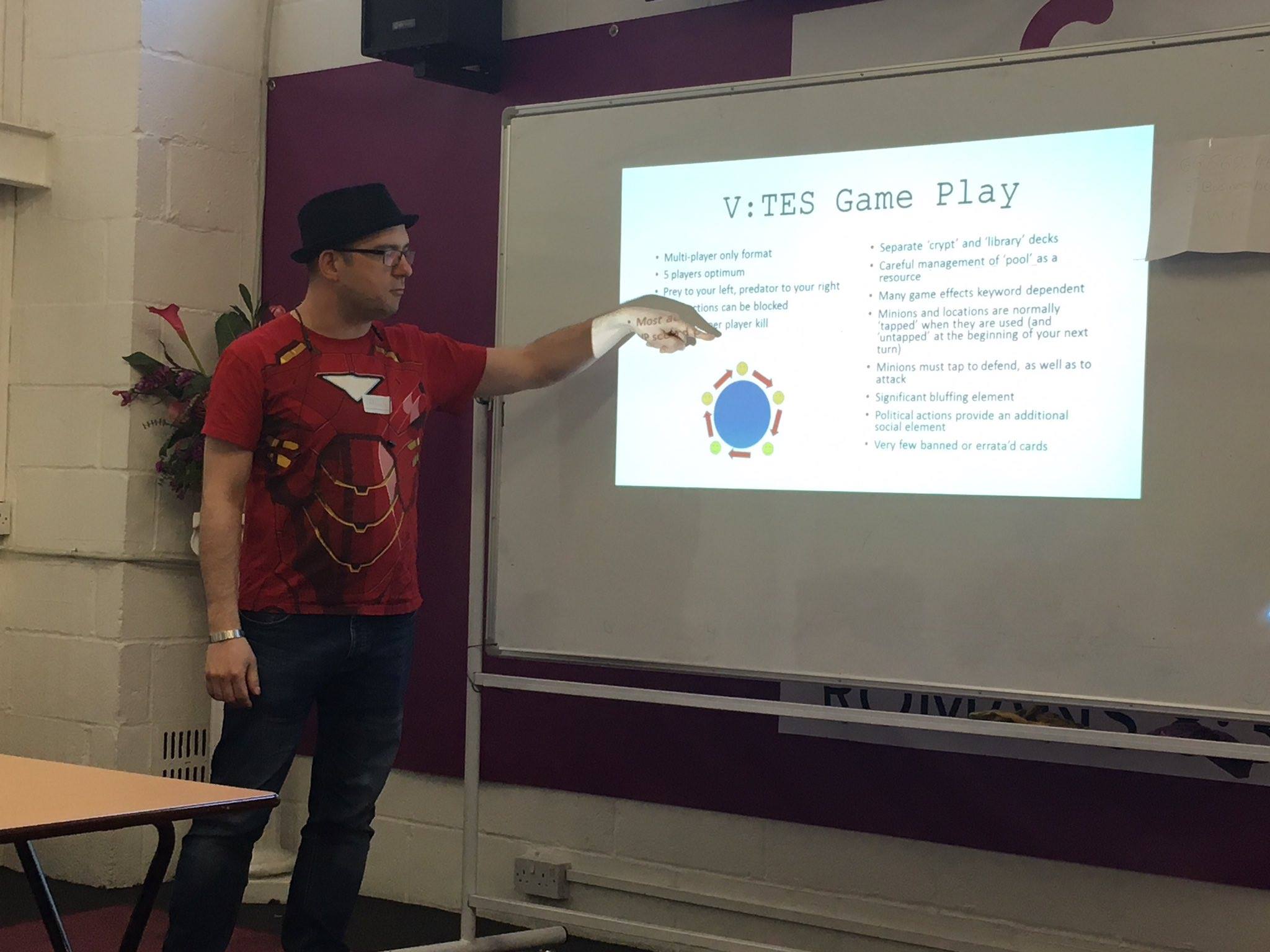 What is BGDevCon?
The Board Game Developer’s Conference (BGDevCon) is an event organised by members of the UK Playtest Meetup group, aimed at bringing independent creatives together to discuss the process – and pitfalls – tabletop game design. This year’s event was held in Enfield, north London on Saturday 15th April, with over 20 people in attendance.

Why BGDevCon?
The new method of bringing games directly from inception to market via crowdfunding platforms such a Kickstarter has seen a wave of young, talented games publishers spring up around the globe. As more people bring their projects to fruition, a lot of them face the same challenges, and make the same mistakes. Events like this allow people to share knowledge and experience for the benefit of their peers. Also, many successful new publishers having successfully delivered a single game as a labour of love, are now on the lookout for new content, to help their brand and their business to grow.

Where do you fit in?
I have been designing games since I was a teenager. After helping to playtest a number of sets for VTES I was given the opportunity by White Wolf to design the official Vampire board game Prince of the City, which was published in 2006.

In 2013 I made an agreement with Grublin Games for them to publish my game Waggle Dance via crowdfunding on Kickstarter. The campaign was a great success, and after receiving many positive reviews online, the game went on to win an award at UK Games Expo 2014 for Best New Family Game.

Designing VTES
My game design experience helps inform my work with Ben Peal on the Design Team. At the first BGDevCon in 2016 I spoke about designing my game Waggle Dance, and this year I decided to share some of the process related to designing cards for VTES.

Designing a customisable card game is in many ways a more complex proposition than a ‘standalone’ board or card game. In the latter case the design environment is small and controlled, and can be tailor-made to suit the needs of the game, which are fixed, rather than evolving. For a CCG, it is necessary to think not just about the potential interactions with every single card already published, but you must also think about how current design may impact the design of more cards in the future.

A CCG also has very particular design considerations. In terms of deck-building efficiency, a card must be worth the ‘card slot’ in your deck, which can only contain a finite and limited number of cards. Related to this is the concept of ‘opportunity cost’ where the value of a card is directly proportional to the probability of a player using the card in each game, once it is included in the deck. This leads on to a need to balance cards in terms of their effectiveness and their versatility – every card should either be strong at one thing, or be less good but applicable to more than one thing.

As VTES is also inspired by the Vampire: The Masquerade tabletop role-playing game, there are also design considerations of a thematic nature. Most crypt cards in the game – including those more recently produced by the Design Team – are based on known characters from this source material. When we design new library cards, we must ask questions such as: is this game effect appropriate for the Discipline or sect affiliation in question? Is there existing material we can use to inform the effect, or to at least name the card?

While not all VTES players know – or care much about – this original source material, it is important for us to continue to respect it, particularly with the view of us wanting to work again with White Wolf in the future. White Wolf’s new owners Paradox Interactive are planning to release a new edition of Vampire: The Masquerade in 2018 – currently being referred to a ‘V5’ and I am looking forward to seeing what opportunities that presents for the future of VTES.

May your pool stay high and your ousts be plenty!