Greetings fellow Methuselahs
It is too cold for smalltalk - here´s the newsletter: 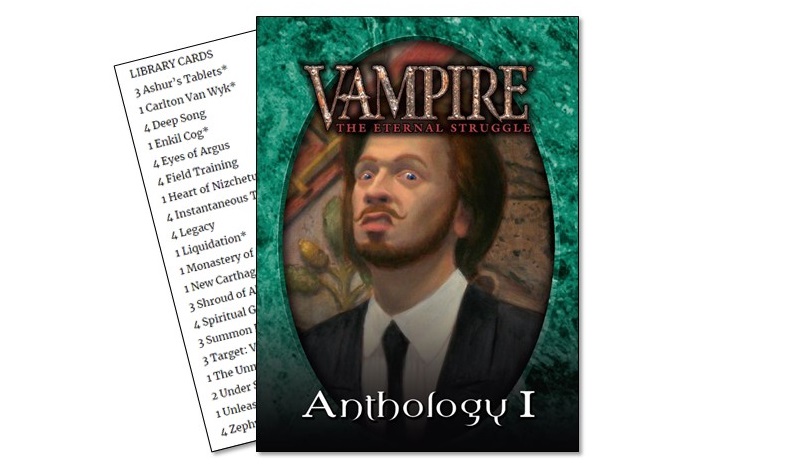 WHAT ABOUT THE ANTHOLOGY 1 ART?
Many are asking, so we better make this clear: Most art in the upcoming Anthology 1 set will be the original art, i.e. the art used for the card in the first printing, not the art produced for the Berlin Anthology printing. This has now been marked on the list at the Anthology 1 product page.

This means the lucky persons who struggled to get hold of the Berlin sets are in possession of something special – Black Chantry will not reuse that art in the forseeable future, with the exception of the ten LARP-related cards produced for World of Darkness Berlin (Styles Margs, The Line, etc.) – these will be reprinted soon.

Another question that pops up frequently for VEKN and Black Chantry officials are if the “pdf sets” produced by the VEKN 2013-2016 are legal for tournament play. The answer is: YES, they are legal until further notice. The pdf-files are found at Official Expansion sets page at VEKN.net, so go ahead, print and play!

The section in the tournament rules that covers this is:

4.1. Cards Allowed
All cards in a player's deck must be genuine Vampire: The Eternal Struggle or Jyhad cards, or official V:EKN issued cards from the only authoritative source www.vekn.net as listed here:
- Danse Macabre
- The Unaligned
- Storyline Rewards 2015
- Anarchs Unbound
When using V:EKN issued cards they must be preferably color printed on standard paper and inserted into opaque sleeves before another Vampire: The Eternal Struggle or Jyhad card, this requires opaque sleeves for the whole crypt and/or library. These cards are not considered as proxies. See http://www.vekn.net/official-expansion-sets 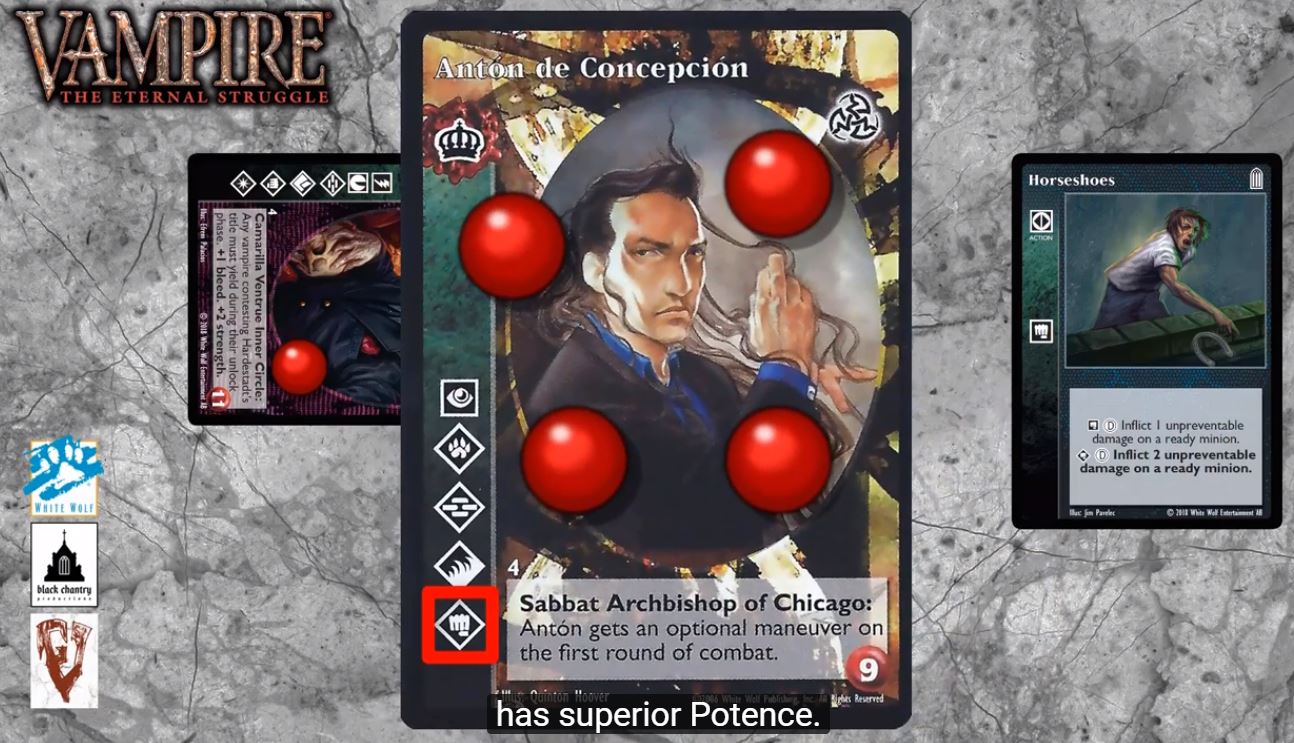 VTES CONTENT COMING ON STRONG
The VEKN are delighted that many new sources create great reading and viewing online. This month we want to give special credit to:

Information Highway: Top French players write this, and they do it very well. Recently we have seen four articles reviewing the upcoming Sabbat-themed preconstructed decks, with strategy advice and tips on how to modify them. We look forward to more! https://vtesinformationhighway.wordpress.com/

VTES One: German long-time blogger Extrala continues to update us on all VTES things. VEKN and Black Chantry frequently send beginners with questions to this site, especially to the deck list section and articles about deck archetypes. Thanks for all the work you put into this Extrala! https://vtesone.wordpress.com/

Generación V videos: The Palma players continue to deliver introductory videos about VTES – currently four clips are up. It is in Spanish, but subtitled to English. A great effort, and great result! https://www.youtube.com/channel/UCE2hQGYrXGxwsSInr2l4cWg

Do you also want to produce some VTES-related content online? You are very welcome, just remember that if you want to use White Wolf property extensively (for example card images), you have to add the Dark Pack logo and follow the Dark Pack rules: https://www.white-wolf.com/dark-pack

• The first US distributor for the European printed cards has been found: KGS Cards. Print-on-demand will continue on Drivethrucards, now also testing “European style” tuckboxes.

• January was spoiler month for the upcoming Sabbat pre-constructed decks. Now everything has been spoiled - check out each product page for all card and art previews.

• The release date for the Sabbat pre-cons AND Anthology 1 is nailed: From February 16th you will find these products in stores who made their orders on time, and on Drivethrucards.com.

• A revised pdf rulesbook – in English and Spanish – is available on Blackchantry.com/rulebook. These are the latest official rules, and the version that will be tested and used as a base for the improved, illustrated and beginner-friendly variant that will appear later this year.

• The site Blackchanty.com has received a minor face lift, but will still be kept rather simple. A more advanced site with all kinds of fantastic content is in the pipeline, but for now getting more VTES cards into the hands of players has priority. 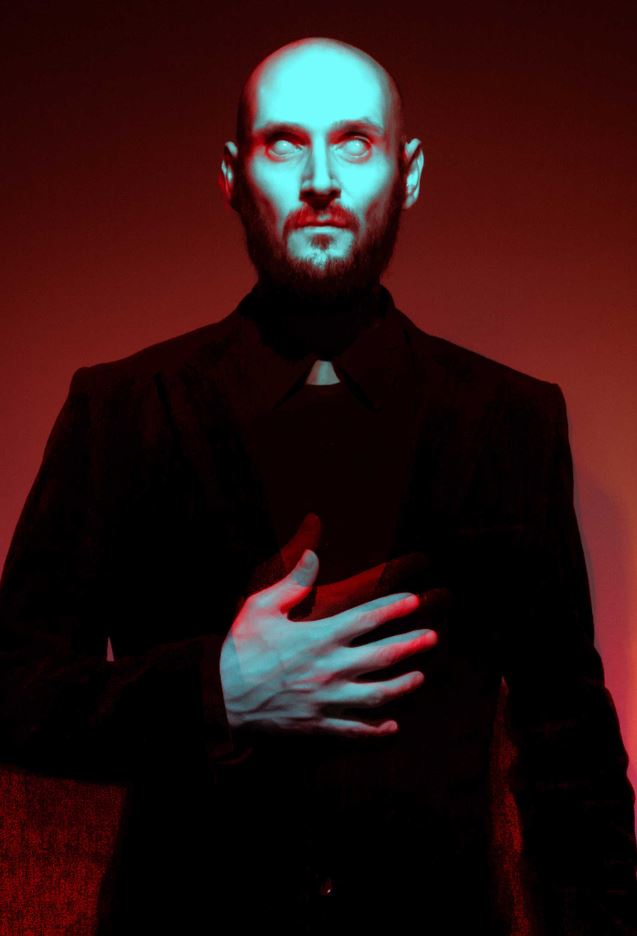 ARTIST IN FOCUS: MARK KELLY
Mark Kelly immediatelly became a fan favourite when he started illustrating VTES in 2014. His realistic but yet horrific style has proven perfect for eye-catching portraits on VTES crypt cards. We caught Mark in a blur of hardware failures, deadlines and termites (!), and he had the kindness to handle our usual arsenal of artist questions.

Are you educated or self-taught?
- In my younger years I was always being creative and it started mostly when I got a copy of the second edition of Warhammer Fantasy Battle with The Tragedy of McDeath when I was about 7 years old. I was always painting, drawing, sculpting and making things in general.
After leaving school I started on the path to becoming an architect but I dropped out after two years and left sunny Scotland for Amsterdam. The next 10 years or so are a bit of blur... I spent mostly partying and playing video games. I eventually quit that lifestyle completely and threw all my energy into creative endeavors. That's when I discovered my love for photography. Initially I was drawn to more abstract photography and landscapes but I soon moved over to portraiture, which is my true passion.
All aspects of my creative skill set are self-taught. From painting, illustration, photography, graphic design etc. I tend to jump in at the deep end and figure things out under pressure.

What kind of assignments do you prefer?
- Honestly, I'm all over the place really. I'm drawn as much to the creepy and macabre as I am to vibrant neon noir cassette futurism. What I prefer most in an assignment is being allowed the freedom to create, within the boundaries of the project of course. I am drawn more to the conceptual interpretation and less so to the generic RPG illustrative approach.

What techniques do you prefer?
- I prefer working with digital media. Mixing photographic elements, light, digital paint and textures. Anything that's going to allow me to convey the artwork as I see it in my mind's eye.

How do you work with models and photos?
- I work with a lot of models and usually cover a range of ideas during a shoot. Some will be more editorial or conceptual portraits while others will be base material for the more illustrative work. I do a lot of experimentation with lights and post processing techniques. Lots of trial and error. There is no default workflow that I follow for the most part. Some times it'll be pure digital paint others it'll be a mix. Anything goes :)

You have made lots of work for VTES and others – what are you most proud of?
- My biggest creative achievement to date was for Mark Rein Hagen's I AM ZOMBIE RPG which was released a couple of years back. A huge project where I did all the artwork, layout, design and factory production management. A 288 page full colour book with bespoke spreads chock-full of artwork, 108 double-sided character cards with a unique portrait either side and the core rule book. Up until that point I'd never used any form of layout software let alone laid out a book, so it was a mammoth challenge that not only turned out to be a great education but a great product. I was also pretty chuffed to get my work included in the new Vampire: The Masquerade Fifth Edition book. I did quite a few full pagers for that.

What other work do you do these days?
- Along with being the lead artist for Make Believe Games (MBG), I've been doing quite a bit of freelance work as both an art director and artist. I've recently started my own publishing company called Dirty Vortex where we'll be producing a range of RPGs and tabletop accessories such as dice sets and 3d terrain. One of our first projects is a collection of Art Deco inspired polyhedral dice called Deco Dice and great for any game set within the Jazz Age. It recently launched Kickstarter and funded within the first 24 hours so that was a fabulous way to start the year. Sets of 10 x D10s are available which are great for VtM and WoD.

- We also have a range of indie RPGs in development that will be releasing in 2019. First up is Solemn Vale which is a folk horror roleplaying game set within an isolated village in the South West of England. It's being developed by Matthew Dawkins and has a bunch of great writing talent assigned. That'll be followed up by Endgame '85 which set in a world devastated by a recent nuclear war and is currently being written by the fabulous Brendan Carrion and Adam Sink from the Full Metal RPG Podcast. Last, but not least, we'll have The Sigma Syndrome where players take on the role of powerful psykers. We've yet to assign dev and writing on that.
It's shaping up to be a solid year with many projects in the mix and as a huge VTES fan I hope to get a few more card illustrations done.

We thank Mark for this chat. If folks want to see more of his work, he recommends you to follow him on Instagram as he posts there more often than any other social media. You find him at @grimventures (personal work) and @dirtyvortex (Dirty Vortex work) 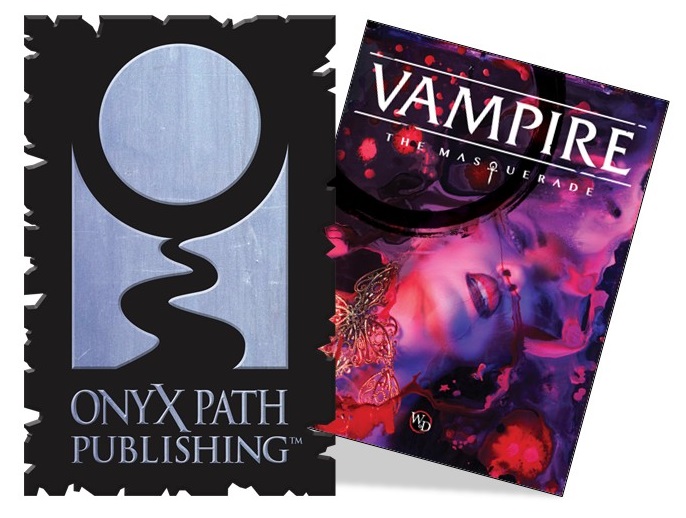 CULTS OF THE BLOOD GODS
Onyx Path Publishing (which is doing Chicago By Night and The Fall of London for Vampire: The Masquerade Fifth Edition) recently revealed yet another exciting V5 product in their pipeline: Cults of the Blood Gods. Not many details are disclosed at this point, but the book is developed by Matthew Dawkins and has been described by Onyx Path CEO (and VTES artist) Richard Thomas as "a book detailing the Hecata including Clan Giovanni, the various religions that have sprung out of vampire culture like the Church of Caine, and much more!" Hecata is the V5 catch all-name for the clans and bloodlines in the necromantic tradition; Giovanni, Harbingers of Skulls, Cappadocians and Samedi. We´ll see in the future what this means for VTES!

“We can either do politics or we can have politics done to us.”