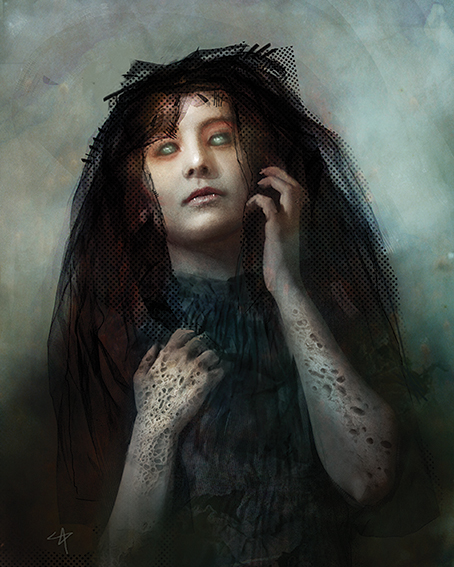 It´s not easy to create a newsletter without those big tournaments to report about, but there are some things happening … 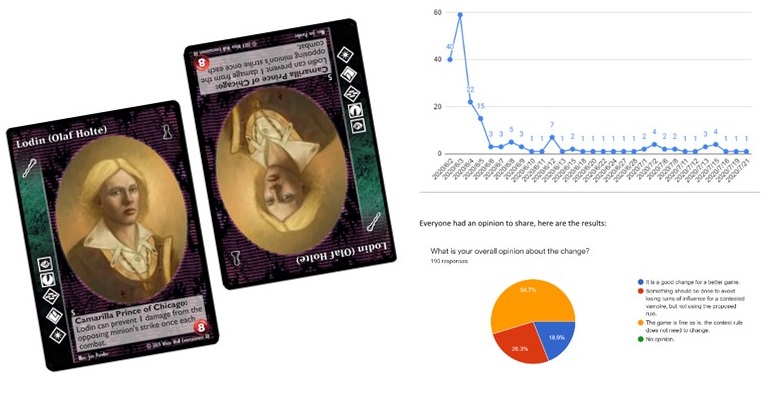 NO CHANGE OF VAMPIRE CONTEST RULE

The open playtest is over, and the rules for contesting crypt cards WILL NOT be changed. Black Chantry Rules Director Vincent Ripoll has collected and assessed the playtest reports and survey forms, and come to the conclusion that a change is not happening, at least not now.

In Vincent´s own words: “The overall opinion is that changing the rule would be detrimental to the game and that the cons overweight the pros, but with no statistical evidence. There are also some real rule issues with the proposed change. Therefore, the proposed change is discarded. There were some interesting alternative suggestions that we will consider in the future.”

Thanks to all of you who made your voices heard! 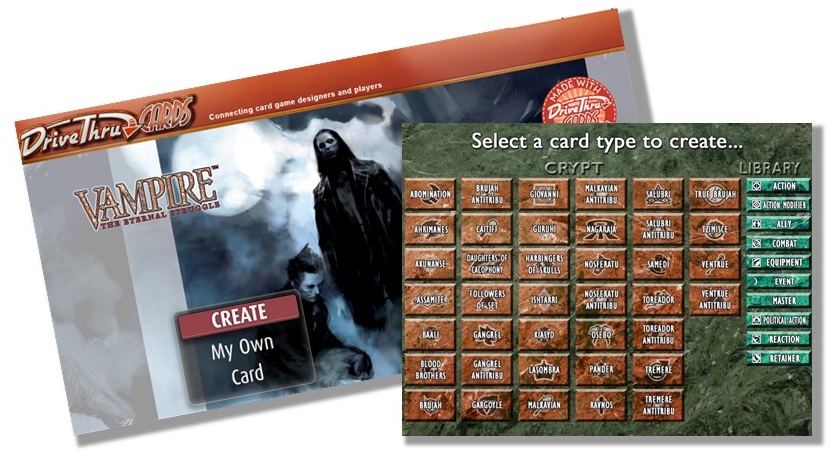 CREATE YOUR OWN LIBRARY CARDS!

Since March last year it has been possible to create your own VTES not-for-legal-play crypt cards at Drivethrucards.com - choose artwork, card names and effects, and also have the cards printed and sent to you. During this summer a test of Library cards has also been available, but because some bugs had to be chased out off the system, this hasn´t been widely marketed yet. But now it´s ready! So go to the site and try it out right now! 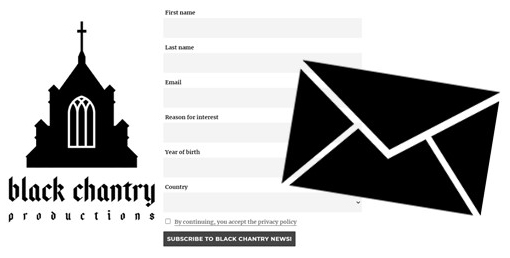 The VEKN will stop using the old VEKN e-mail sendlist due to the data protection regulation (GDPR). Instead, we will gradually switch over to using Black Chantry channels for most communications. We therefore ask all players, especially Princes and National Coordinators, to please sign up for the Black Chantry newsletter, which, of course, is also the best way to get the most recent news about Vampire: The Eternal Struggle products. Register at www.blackchantry.com/newsletter

Hello Deneš! When did you start playing VTES?
- It was around 2000, not sure the exact year, with friends who were in the same science fiction/fantasy club. We also played a lot of different pen & paper RPG's and Magic: The Gathering at the time.


What do you like most about the game?
- I like the complexity of it, the social interaction and the diversity of decks. I think I am most likely to remember the tough games when I manage to pull through and still win. I mostly play some deck with a twist and try to play to win in a certain way. But I am most happy having fun with my friends, no matter the outcome of the game played.

What is your all-time favorite deck?
- Stanislava & Co. That deck can stand on its own against the whole table. I think that its strenghts are versatility and speed. Its weaknesses? Well, against weenie decks the deck will crumble.

What other decks do you currently like playing?
- Euro-Brujah, Mini-dem bleed, weenie princes, African library, The AAA... the list goes on. But I don´t have much new tech brewing currently, too busy with real life at the moment.

Do you think you have a special style of playing?
- Not really. I don't talk a lot, that is my problem in the game. I can't talk table-hate off, and I find it hard to sell a sweet deal. I prefer to give short deals, but only if I am on the losing part ... to try and snatch a VP...

You are the National Coordinator for Croatia. How is the situation for VTES there?
- We are a small community, and the period of not printing really cut our numbers down. We have 3 cities with Princes. With the reawakening of the capital city of Zagreb, I encourage holding tournaments and reaching to our neighbours for participation. But, to be honest, we, as a whole country, have a regular base of 15-20 players. There is not much that I can do. The players got older, young players prefer online and easy games... I encourage the player base to reach out to their friends and try to engage them in some play, but I don't see many newcomers. Even the Magic society has dwindled down - that says a lot about our social and economic possibilities of engaging such hobbies. Keep up the good work and I hope that there will be more progeny in the future!

Thanks Deneš! Without generous volunteers like him VTES could not live on year after year. Hopefully without corona and with the Fifth Edition box available, new players will join the best player community in the world!

• The Fifth Edition box content in English, French and Spanish is now at the printer! It took a rush of joint efforts to get this done (in the middle of normal people´s vacation period), but finally everything was put into place, approved and sent.

• The very long art and card spoiler season for Fifth Edition is approaching its end. At the top of this newsletter you see the art for the Malkavian Gelasia Fotiou by the great Samuel Araya, who was interviewed in the February 2020 newsletter. This is the actual card: 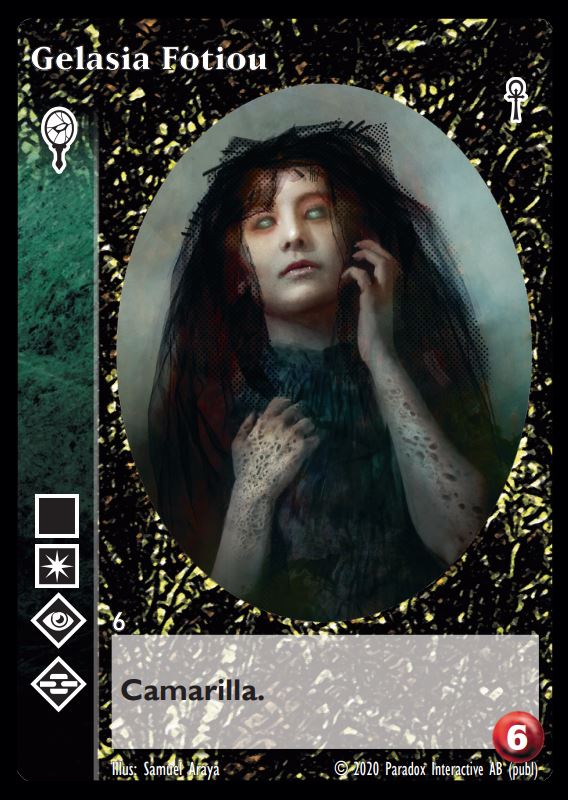 • The first round of playtesting of the next four preconstructed decks is ongoing. The Banu Haqim deck will be Camarilla, while the Brujah, Gangrel and Ministry decks will be Anarchs. The first reports from testers are rather positive, even though there are many strong opinions about some individual cards. This first round ends in mid September, after which reports will be collected, the decks revised and a new round of testing will start.

• A batch of about 400 cards are being prepared for VTES Legacy Card Singles at Drivethrucards. Again, this is a team effort where Ben and Hugh have been selecting what to add, Vincent is updating card texts for modern templating and layout, and Ginés is making sure the old art is available or commissioning new pieces. 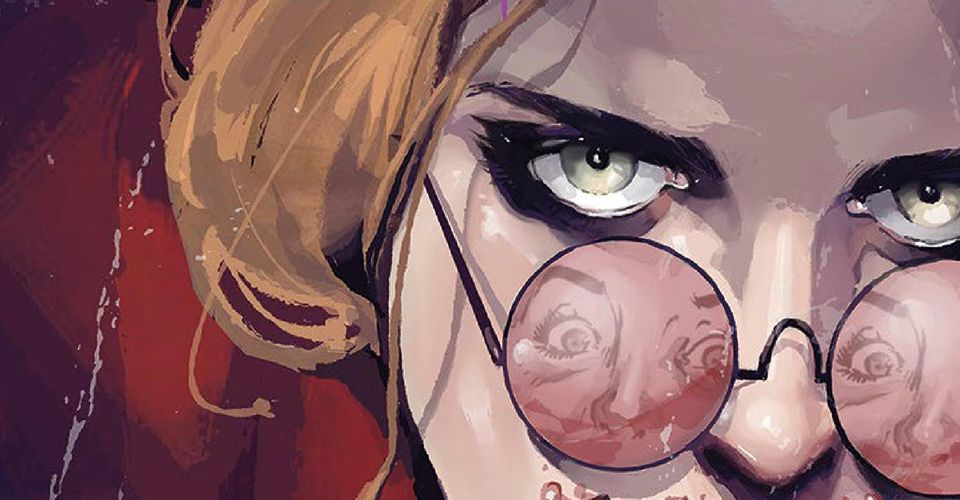 The World of Darkness team at Paradox is really picking up the pace with all kinds of projects within the brand, but in the Vampire-oriented news we especially notice:

• The first issue of Vampire: The Masquerade comic is out. It includes two connected stories, set in Minneapolis–Saint Paul in Minnesota: "Winter's Teeth", which follows the vampire enforcer Cecily Bain, who takes in the abandoned younger vampire Alejandra; and "The Anarch Tales", which follows a coterie of Anarch vampires, who are given the task to investigate a murder.

• The long awaited computer game Vampire: The Masquerade - Bloodlines 2 has been delayed until 2021, and the project had some organisational changes.

• The main themes of the World of Darkness News show in the past month have been Werewolf: the Apocalypse - Heart of the Forest (July 30), Vampire: The Masquerade Rivals (August 6), Bloodlines 2 updates (August 20) and storytelling with “MathasGames” (August 27).