13 May 2018 06:54 - 13 May 2018 06:56 #86854 by Bloodartist
Replied by Bloodartist on topic Rules Team Rulings - RTR 11/05/2018
I agree with Ankha's templating. You don't need to make the very few exceptions to the rule 'elegant'. Its much better that they are explicit and clear in what they do. There are only a handful of cards that break the limited rule. A handful of cards also don't need a keyword assigned to them. I feel that VTES card designers have fallen into this trap several times in the past.
A heretic is a man who sees with his own eyes.
—Gotthold Ephraim Lessing

Villein
The amount of blood you can move is now limited to 5.


I'm glad to see that fatties are being reined in to some extent with the change to Villein. Every deck I've played in recent tournaments has had to plan around my prey gaining massive pool due to Villein from fatty, super-strong vampires. It is good for VTES that that is less of a factor now.
Be careful when you fight the monsters, lest you become one.
-Friedrich Nietzsche

kschaefer wrote:
If the keyword unlimited were added to the rulebook, you could add that non-parenthetically to the card to make it concise and elegant at both levels.


There's still a problem with inconsistency: some cards will have parenthetical text that say "(limited)" following the main text on the card, and other cards will have "Unlimted" not in parentheses before the main text on the card. Inconsistency is an issue because it hinders comprehension. This is not just a VTES thing, it is a general rule when writing anything, whether it be a book, newspaper article, thesis, or card text in a card game. This is my viewpoint, and I'm sure it does not mesh with the viewpoint of long-time VTES players.

drnlmza wrote:
You don't expect the use of "unlimited" to to cause arguments from a player about why they can't immediately play a second "Command the Beast"?


Yes, but that's a sequencing/impulse issue. How passing the impulse works is not described anywhere in detail. I'd expect a lot of arguments to stem from that issue over a misinterpretation of what "unlimited" means, especially if "unlimited" were defined in the rulebook.


The only one action modifier by name rule already trips new players up often enough without adding text that can easily be misinterpreted to say it doesn't apply.


So by removing "you can only play 1 action modifier to increase the bleed for this action" with "(limited)", we're making things easier to understand for new players? I'd disagree. I don't think the goal was necessarily to clear things up for new players, the goal was to reduce the amount of characters on the card. And I tend to agree that having fewer characters on the card is important enough to institute keywords/reminder text that point to further description in the rulebook. How this should be implemented is proving to be tricky (in my opinion).


Also, this change unifies the presentation of Additional Strikes and bleed modifers, Your proposal means that Quickness, for example, will read

[CEL] Additonal strike (unlimited). A vampire may only play one Quickness each round.

You don't see that causing confusion?


Without looking at the rulebook, of course. But as long as there's a clear description of what "unlimited" means in the rulebook, at least there is something to point the confused player toward. Having fewer characters on the card is the bigger goal here.

Bloodartist wrote:
I agree with Ankha's templating. You don't need to make the very few exceptions to the rule 'elegant'. Its much better that they are explicit and clear in what they do.


But by replacing "you can only play 1 action modifier to increase the bleed for this action" with "(limited)," I don't think we are making things clearer necessarily. Again, i think the main idea was to reduce the amount of characters. I just see the inconsistency between parenthetical reminder text on some cards and full clauses on others as problematic, but I may be in the minority.
Last edit: 14 May 2018 13:11 by TwoRazorReign.

The anarch trait was tightly associated to the Independent sect until now: if an anarch vampire changed sect, it would lose the anarch trait, and some titles are anarch titles.

Anarch is now a sect on its own (alongside Camarilla, Sabbat, Independent and Laibon). For compatibility, all cards that were previously available to Independent (except for Rise of the Nephtali*) will now also be available to Anarch: Banner of Neutrality, Community Justice, Exclusion Principle, Free States Rant, Haqim's Law: Judgment, and Reckless Agitation. Future cards that require an Independent vampire will not be usable by an Anarch vampire (unless if it is explicitly stated that they can use it too).
*The title of liaison provided by Rise of the Nephtali is an Independent title: only Independent vampires can hold that title. 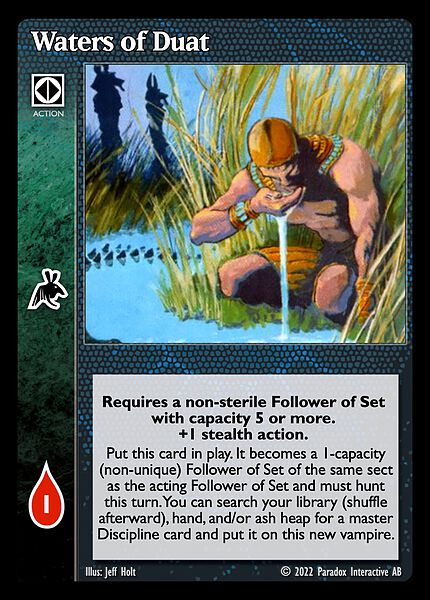 This means the waters come into play as anarchs already?
Archbishop of Itaocara
Prince ID #510