Why celerity is such a bad discipline ?

is less good in general for combat that

Superior is different, and looking at non combat is even worse.

has the effects you need, like additional without blood cost, prevent, and psyche.

lacks relevant non combat, except the standing strength increases. So extra cards can be designed knowing what any given discipline has and doesn't have.

And BC have been creating things to help weak areas, theyve just been doing so cautiously.

Anarchs got a big shot in the arm,


They are making wrong cards.
VtES is a game about dealing pool damage to your prey. There are effects which do it, which help to deliver, which defend against it. If all such effects are already taken by other disciplines there are nothing you can do to make "last on the train" ones better.

And you can't go Emerald Legion way, aka Action: "win the game with some stupid conditions", because

is quite widespread and it will be just taken by Unnamed/Stanislava.

Less More
28 Nov 2019 17:18 #98028 by self biased
Replied by self biased on topic Why celerity is such a bad discipline ?
I know I sound like a broken record sometimes, but for all of the complaints people seem to have, the most effective solution is the least popular. But then again, if we actually fixed things we wouldn't be able to complain about things. 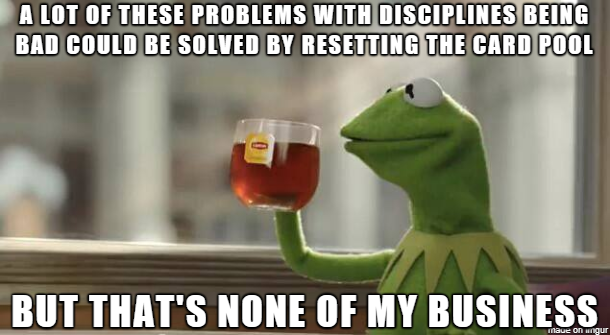 Less More
28 Nov 2019 22:02 - 28 Nov 2019 22:05 #98030 by LivesByProxy
Replied by LivesByProxy on topic Why celerity is such a bad discipline ?
As others have pointed out, Celerity has some of the poorest card efficiency in the game - partly due to being so heavily oriented toward combat. Getting a Manuever / Additional Strike at inferior/ superior, respectively, just doesn't compare to Bleed 3 / Bloat 3 for 1 blood.

But if VTES is about dealing pool damage, and all other effects are tangential, then we need more ways of dealing removing pool.

But presently, there is no difference between losing pool, being bled, and burning pool within the game. I made a thread a while back trying to get BC to pursue these differences.

For example, in Magic, "damage" is distinct from "lose life" effects, even though it counts as life loss. Effects which key off of "damage" don't key off of "lose life". This difference makes the colors Red magic and Black magic feel different, and let's WotC print effects that support both without strictly increasing the power level of the other.

Something similar could be helpful for VTES in distinguishing different disciplines and clans. Celerity

could have actions that "steal" pool for the controller, as distinct from bleeding or burning. And if bleeding didn't result in burning then more difference could be emphasized.

Also, "moving" pool as with 419 Operation, and effects which force others Meths (your prey) to "pay" you would be helpful.

Less More
29 Nov 2019 07:42 #98039 by elotar
Replied by elotar on topic Why celerity is such a bad discipline ?
Main difference between damage and lose life in mtg is not mechanical, it's that most such effects gains the same amount of life to the caster.

And this effects are already taken by kindred spirits,

So no luck for

deal 2 damage to a minion

as above and gain 2 pool