Each crypt card has a set of elements that are described below. Some advanced expansions include other types of crypt cards – to learn about those, check the Appendix.

Name: Each crypt card is unique, so only one copy of each can be in play at a time.

Blood Capacity: The number in the red circle in the lower right corner of the card is the vampire’s capacity. 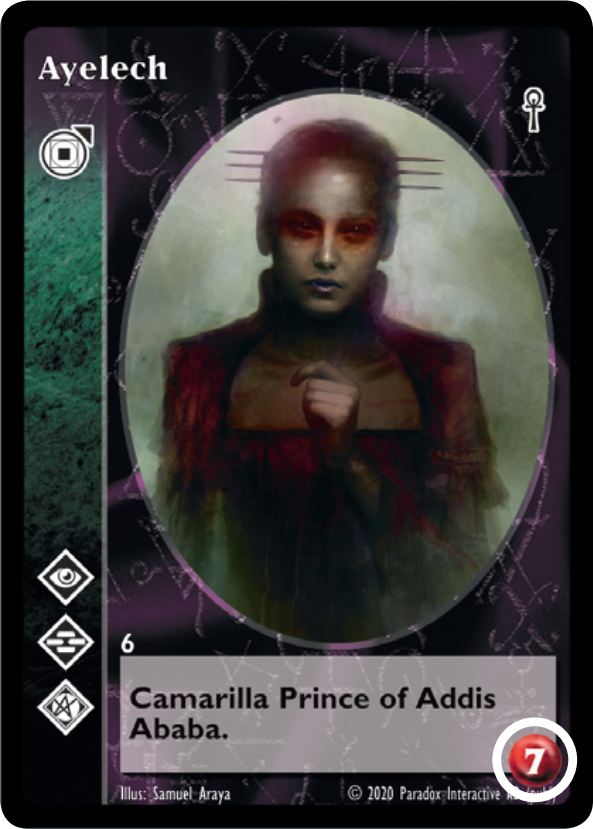 This number represents many things: the vampire’s relative age, the amount of pool a Methuselah must invest in the vampire in order to bring them under their control, and the maximum ability they have to mend wounds or play cards (some cards cost blood to play). A vampire with a larger capacity than another is said to be older, and one with a smaller capacity is younger. A vampire cannot have more blood than their capacity; if an effect puts more blood on them than their capacity allows, the excess is always moved to the blood bank immediately.

An uncontrolled vampire will have blood counters stacked on them representing the amount of pool that has been invested in them. During the influence phase, if that stack equals or exceeds their blood capacity, you can reveal the vampire and place them in the ready region. They retain the pool counters used to influence them on their card to serve as their blood, any blood counters in excess of the capacity drain back to the blood bank (see Influence Phase).

Clan: Each vampire belongs to a clan, identified by the symbol at the top of the attribute bar (the marble stripe on the left side of the card). 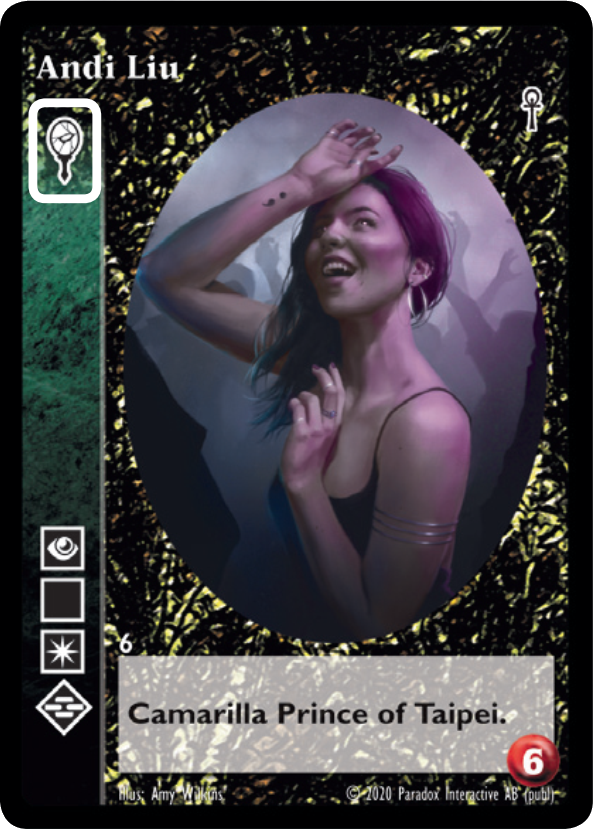 Disciplines: These are supernatural powers that vampires possess. The Disciplines possessed by the vampire are represented by the group of symbols at the bottom of the attribute bar. 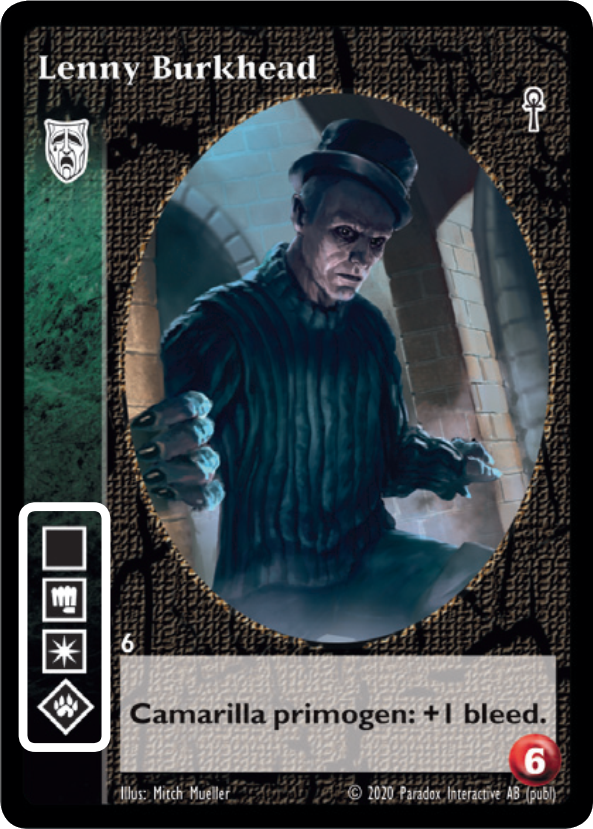 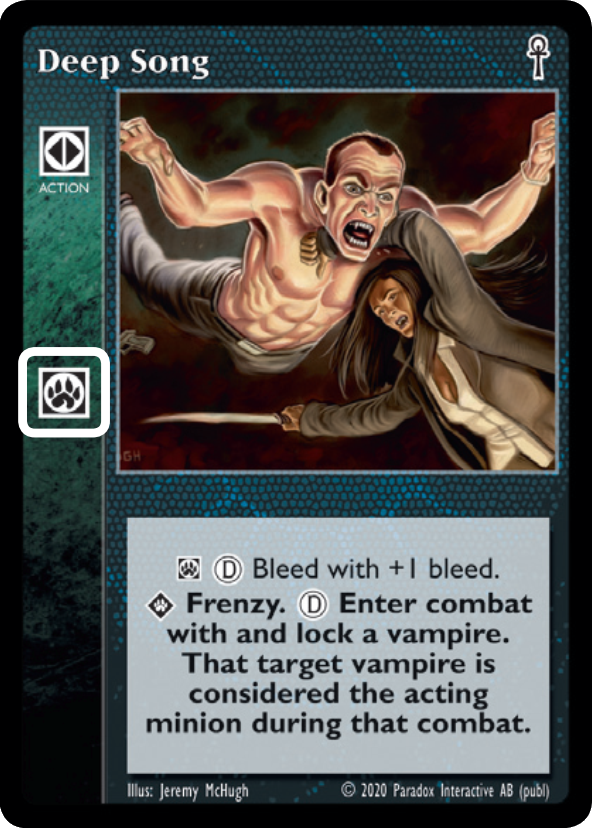 A Discipline symbol within a diamond signifies that the vampire has the superior level, and therefore may opt to use either the basic (plain text) or the superior (bold) effect listed on the card (but not both). 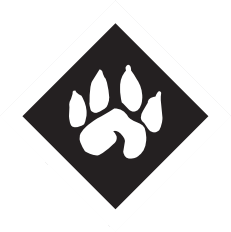 Some library cards have multiple Discipline symbols on the attribute bar (see Requirements for Playing Cards).

Text box: The area containing a vampire’s sect (Camarilla in this case), title, special abilities or other attributes.

Expansion symbol: This symbol indicates the expansion set in which the crypt card was released, and has no impact on the game.

Illustration: Denotes the artist who produced the artwork for this card.

Copyright: Denotes the copyright of the game which belongs to Paradox Interactive AB (publ).

There are two main types of library cards: 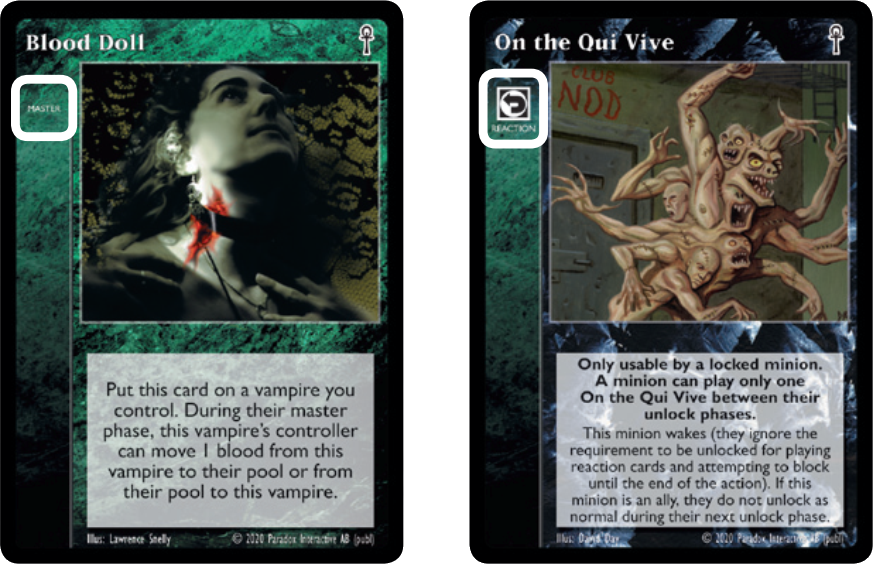 Minion Cards: Minion cards are played by the minions (vampires and allies) the Methuselah controls.

A card is played by announcing its effects, showing the card and placing it from the hand in the ash heap. Sometimes a card will state to put it into play, you should announce its effects and place the card in the play area.

Each library card has symbols on the attribute bar (the marble stripe on the left side) for the card type (except for master cards), the clan, or Discipline (if any) required to play the card, and the cost (if any) of playing that card. 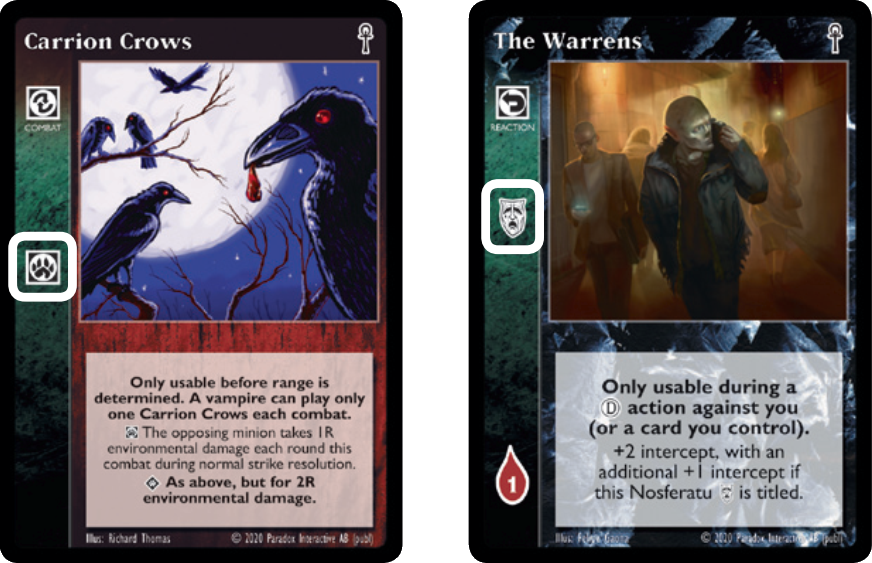 A number in a red drop represents blood cost (the amount of blood the vampire must burn). Only a vampire with enough blood on them can play a card with a blood cost. A number in a white diamond with a skull represents pool cost (the amount of pool the Methuselah must burn). Only a Methuselah with enough pool can play a card with a pool cost. 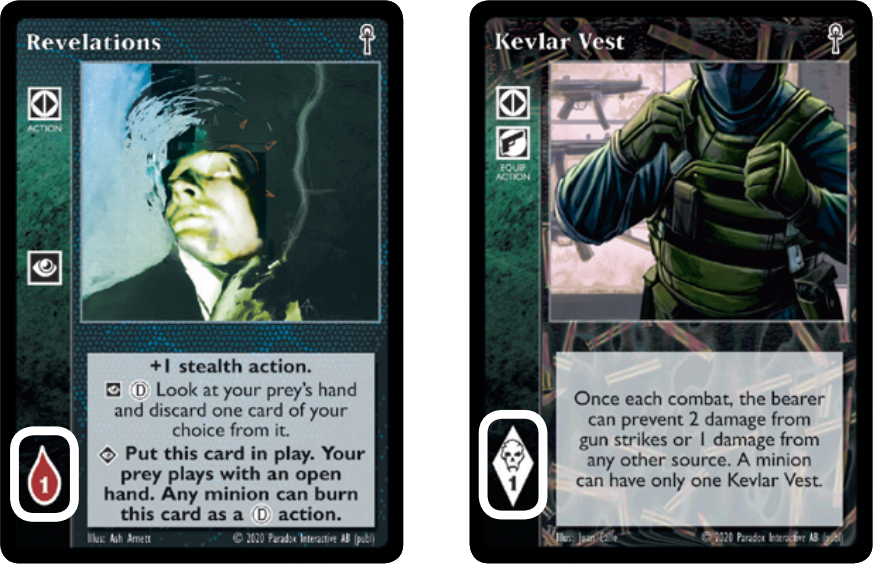 Master cards are cards you play in your role as a Methuselah. There are two categories of master cards: regular and out-of-turn master cards.

The general types of master cards are as follows:

Locations: A location card represents a place (that is a building, a city, or a designated gathering place) that a Methuselah or their minions control. A location card stays in play and may be used repeatedly, even on the turn it is played. Some game effects can burn them. 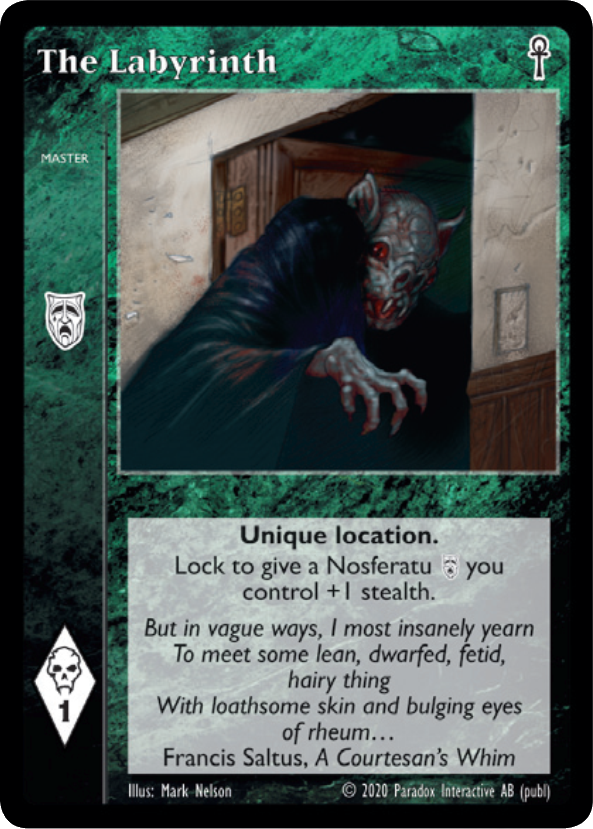 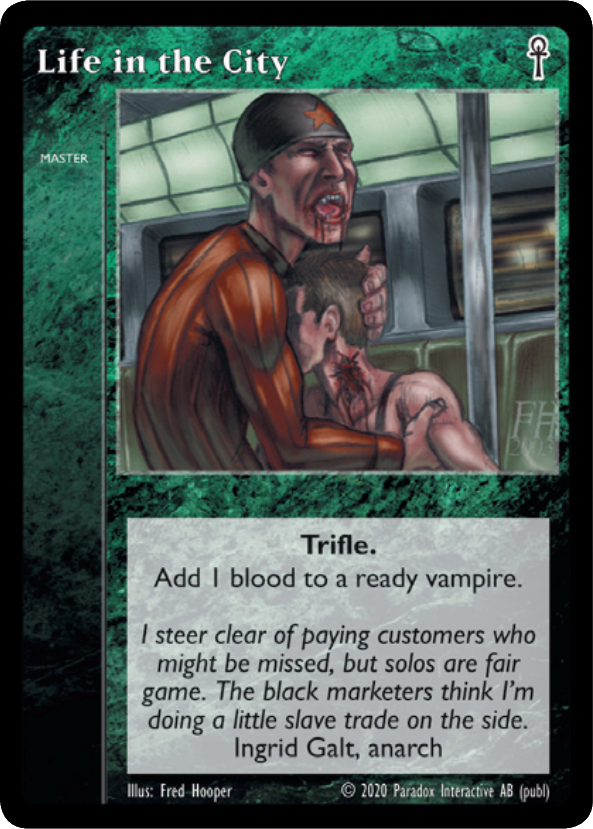 Other master cards: Any master cards not explained here have their effects described on them.

Minion cards are cards that your vampires and allies (collectively referred to as “minions”) play. 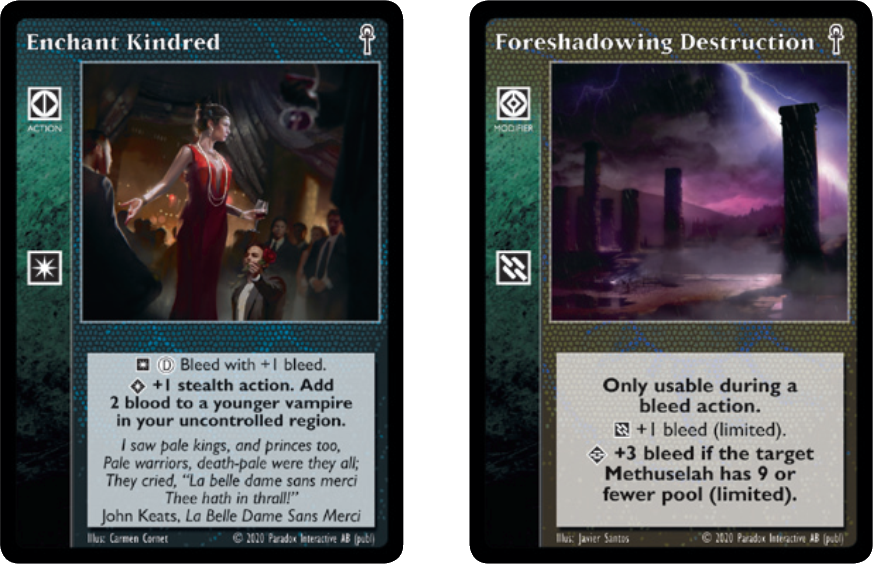 In many cases, a minion card will have a Discipline symbol, a clan symbol and/or a blood cost; in these cases, the card can only be played by a vampire who meets the requirements.

The general types of minion cards are as follows. It is possible for a minion card to be of multiple types.

Action cards: A ready unlocked (see Important Terms of the Game) minion can play an action card to perform an action other than the default actions. Only one action card can be played for the action. Action cards cannot be used to modify other actions. 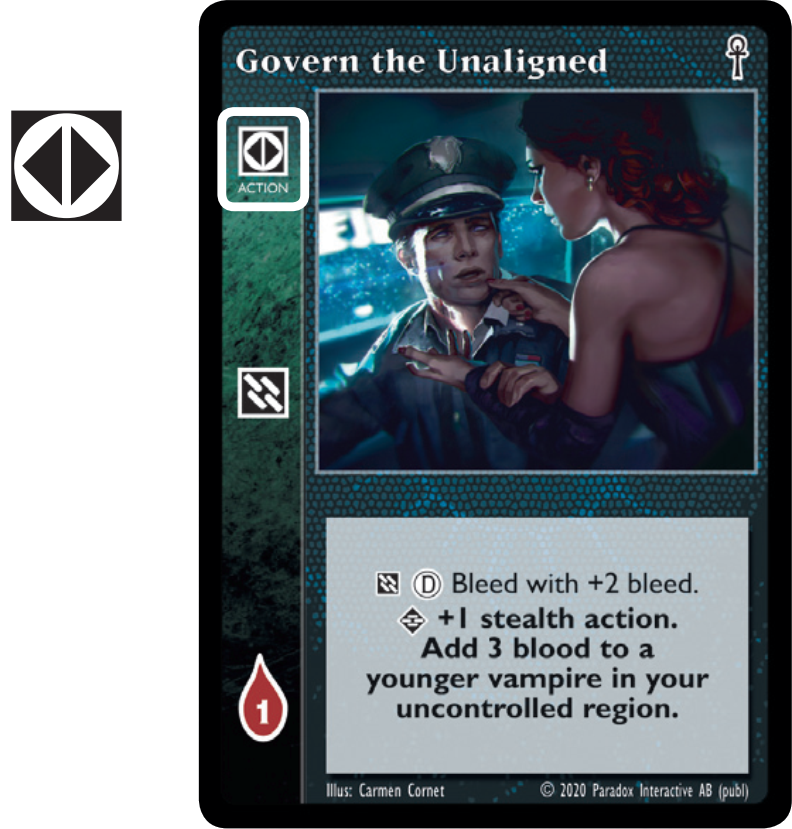 Action modifier cards: The acting minion can play these cards to modify their action at any time before action resolution. A minion cannot play the same action modifier card more than once during a single action (even if using a different Discipline level). 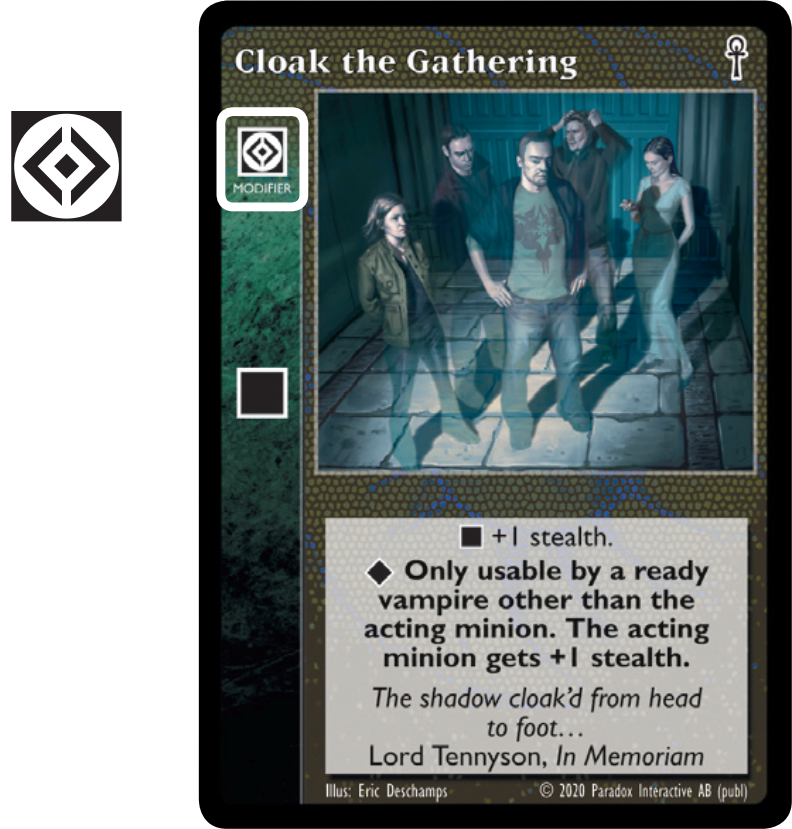 Some action modifier cards are played by minions “other than the acting minion”. Only minions controlled by the same Methuselah can play those cards.

Ally cards: These cards are put into play with their starting life from the blood bank, and remain independent from the acting minion. 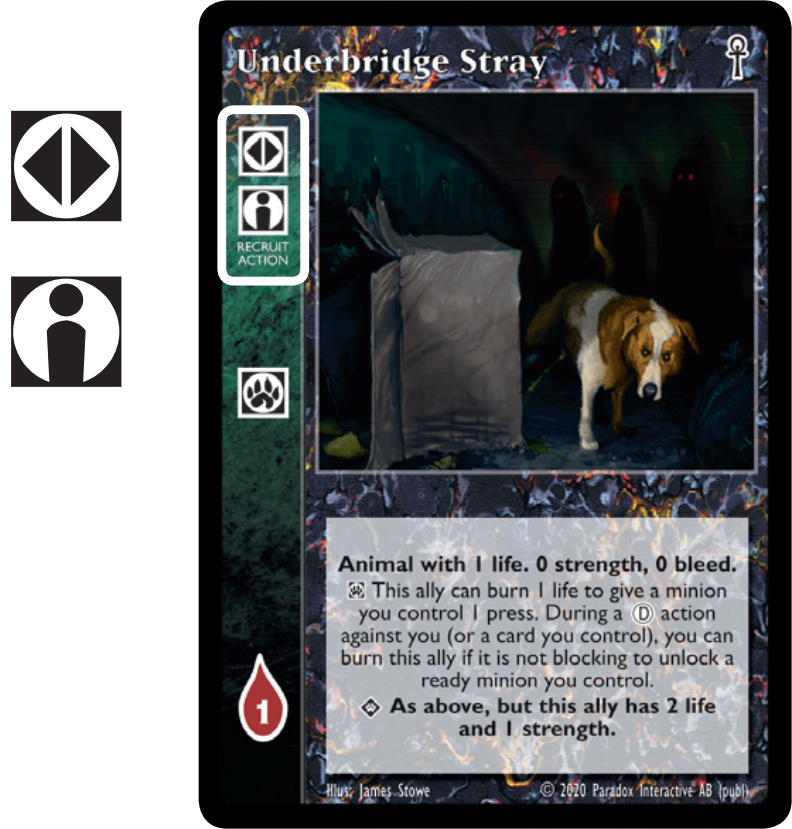 Equipment cards: These cards are put into play on the acting minion. Equipment cards are burned when the minion they are played on (usually referred to as “the bearer”) is burned.

Retainer cards: These cards are put into play on the acting minion, with their starting life from the blood bank. Retainer cards are burned when their last life is burned, or when the minion they are played on (usually referred to as “the employer”) is burned. 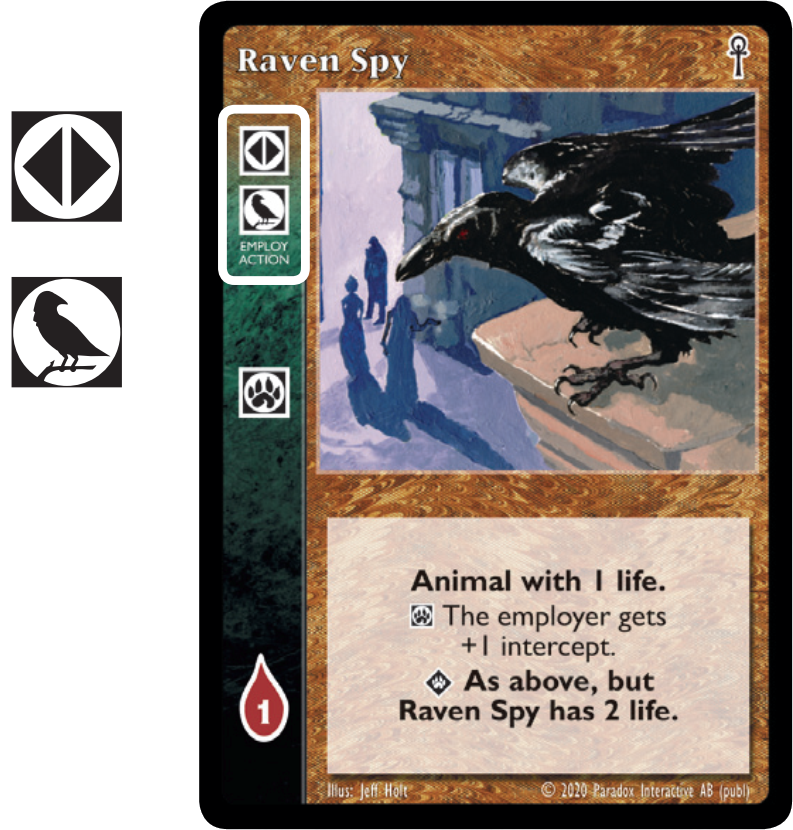 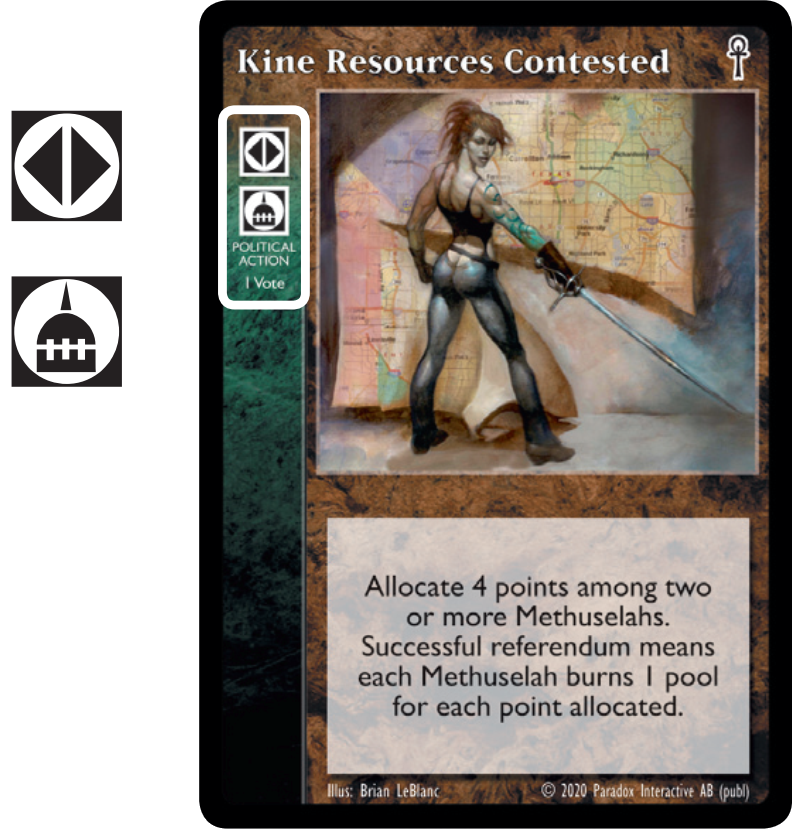 Combat cards: These are played by minions when in combat (see Combat). 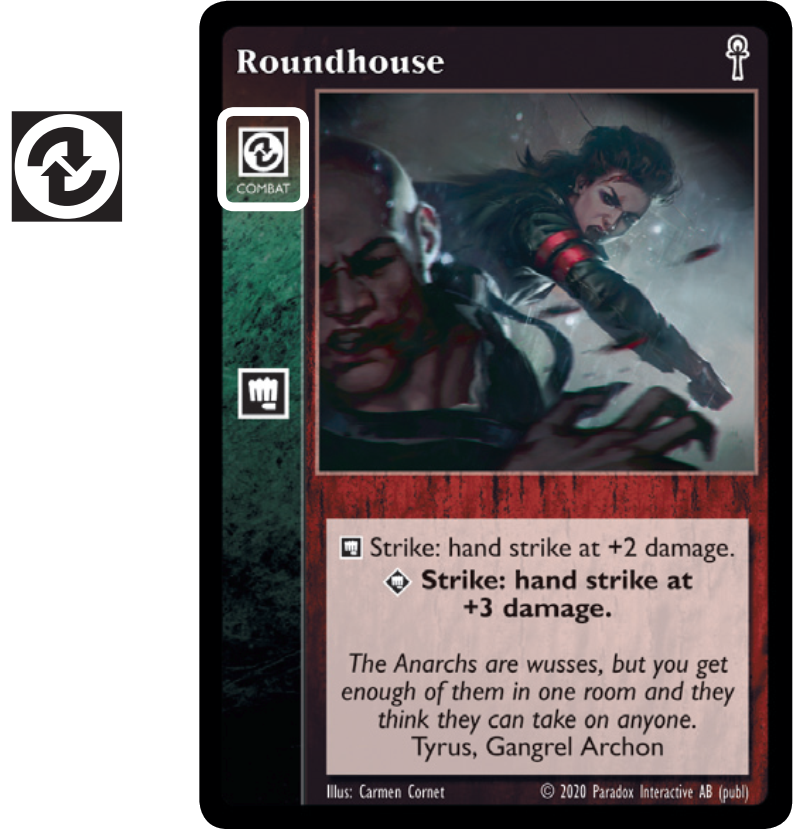 Reaction cards: A ready unlocked minion can play a reaction card in response to an action taken by a minion controlled by another Methuselah. 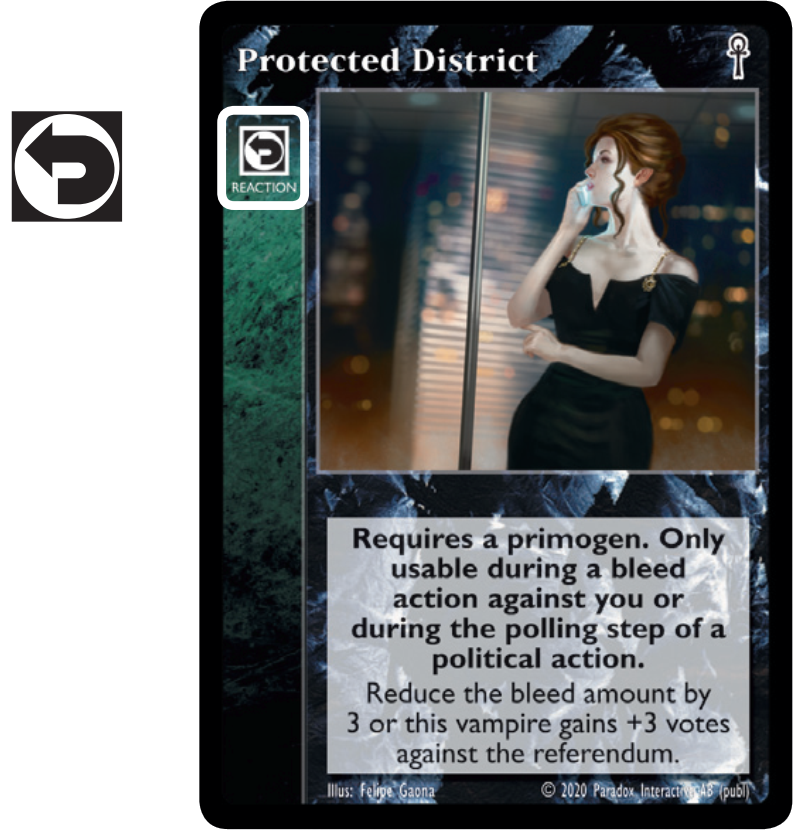 A minion cannot play the same reaction card more than once during a single action (even if using a different Discipline level). A reaction card does not lock the minion playing it.