The Edge (5) begins the game uncontrolled and is placed in the central area as well.

To begin, separate your crypt cards (10) from your library cards (11). Shuffle both decks and allow your predator to cut both. Place both decks in front of you. Draw the top seven library cards to form your hand (12) and deal the top four crypt cards face down into your uncontrolled region (6). You can look at the cards in your hand and in your uncontrolled region at any time during the game. 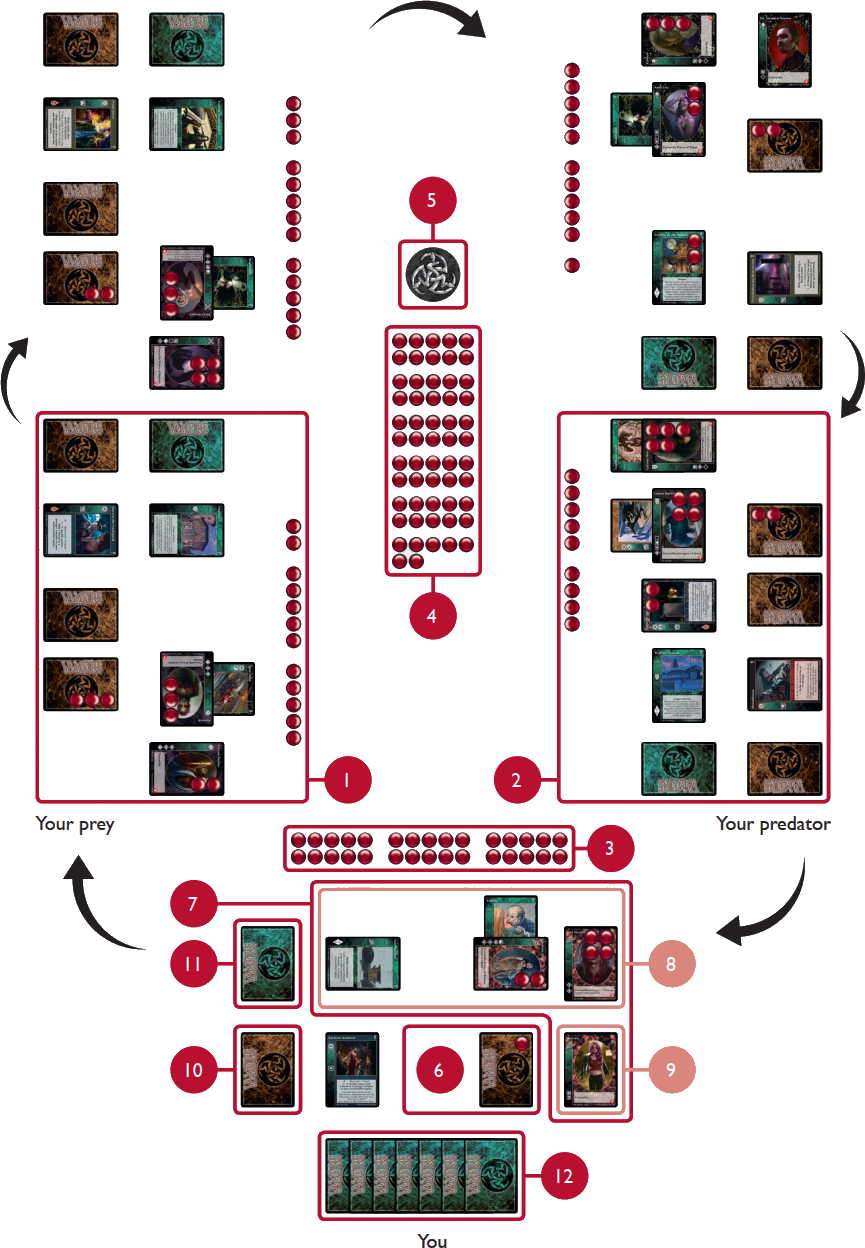 Burn: When a card is burned, it is placed into its owner’s ash heap (discard pile). The ash heap can be examined by any Methuselah at any time. When a counter is burned, it is returned to the blood bank. Sometimes, an instruction may say to remove a card from the game. While some cards and effects can retrieve cards from the ash heap, cards that are removed from the game cannot be retrieved or affected in any way. When a card is burned or removed from the game, any counters or other cards on it are burned.

Control: Vampires put into play by a Methuselah are controlled by that Methuselah.

Control can change through game effects and this is clearly noted when using those effects.

Locking and Unlocking: During play, you will turn cards sideways 90º to lock them, indicating that the cards have been used for some particular purpose or effect. Unlocking a card restores it to its original position, indicating that the card is reset and will be able to be locked again later. Only unlocked minions can perform actions or block the actions of other minions.

Rules of Card Ownership: The cards you start the game with are referred to as “owned”. Your cards can become controlled by other Methuselahs but are never owned by them. At the end of the game, the cards you own are returned to you. If you are ousted before the end of the game, any cards that you own that other Methuselahs control remain in play until burned as normal.

The Golden Rule for Cards: Whenever the cards contradict the rules, the cards take precedence.

“During X, do Y”: The “during X do Y” template is used in several cards. When this template is used, only one Y can be done per X with this card. For instance, you may move blood from your vampire to your pool with Vessel only once per unlock phase.

“Lock X to do Y”: These effects require an unlocked minion to be used, they cannot be used by locked minions.